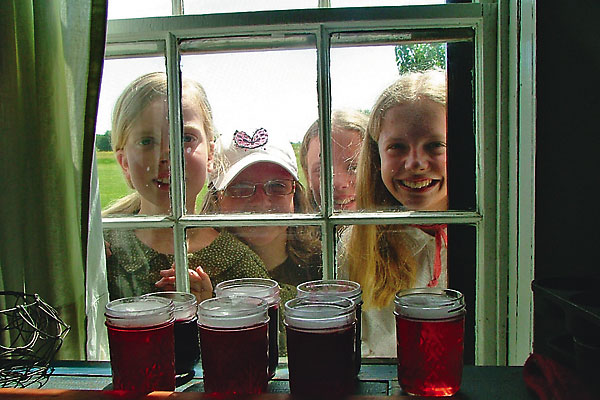 The video about Anne Frank was over— part of a special exhibit at Bosque Redondo Memorial in Fort Sumner, New Mexico—when my son told me, “Those Nazis were really mean.”

“Are they going to come to New Mexico?”

“No,” I told him. “But the next time you talk to Grandpa, you thank him because he joined the Navy when he was young to help stop those Nazis.”

Jack, then five, promptly asked, “Then why wasn’t Grandpa in that movie, Daddy?”

Jack is often my traveling companion to historic sites. We learned about John Muir together (Jack loved hearing about the accident that almost blinded Muir), plus the Anasazi, Charlie Russell, Smokey Bear…. It’s history time. Better yet, it’s quality time.

“At that age I don’t think they’re quite as into it as you would like,” says filmmaker David Zucker of Airplane! fame, “but I think some of it rubs off.”

Zucker knows. For years, he and historian Paul Hutton have traveled together with their young sons on a quest to involve their kids with history.

“The trick,” says screenwriter and producer Tony Ritter, “is to make the West interesting, but don’t shove it down the kids’ throats…. Tell them it’s a big secret and you shouldn’t talk about it. It gets them every time, like a curious monkey.”

It doesn’t all sink in. Charles Zucker, 9, was mesmerized more by a side trip to the UFO Festival in Roswell than Billy the Kid. Hutton can relate. Ask him about his trip to Wyoming, when he stopped with his family at Pahaska Tepee, Buffalo Bill Cody’s lodge east of Yellowstone National Park. The man who ran the horseback riding concession was a fan of Hutton, resulting in a memorable back-country ride.

“The children, who studiously refuse to watch any of my television programs,” Hutton recalls, “now were suddenly deeply impressed with the old man’s achievements.”

When that history sinks in, it’s certainly sweet.

Eighteen months after our Muir road trip, I was working on the house when a screwdriver rolled off a ladder and barely missed my eye.
Jack told me: “You were almost just like John Muir.”

Travel, of course, is not the only way to hook kids on history. True West turned to moms, dads, grandparents and kids-at-heart to come up with 10 ways to help your children appreciate history.

Crow Indian artist Kevin Red Star loves children to visit his studio in Roberts, Montana. “They’re unlimited with their expressions,” he says, “and I like that.”

Art, Red Star says, is a great tool to introduce history and heritage. Many art museums know this.

Not everyone can afford a Western road trip, so what’s the next-best thing?

“The nearest public library,” best-selling novelist John Jakes says. “Yes, you can learn a lot on the Internet, but somehow it isn’t the same as developing a lifelong habit of literary detective work ‘in the stacks.’”

More important, read to your children, and get your kids to read. Easier said than done. “I’m still following my 13 year old around with a copy of Old Yeller and trying to make him read it,” novelist Elizabeth Crook laments.

But it’s a fight we must win.

Charlotte Hinger recommends Monument Rocks near Scott City, Kansas. “They are best explored,” she says, “in the presence of a truly clueless grandmother who forgets to say ‘be careful’ until it’s too late and the horse is out of the barn.”

Maybe we should tip our hats to Thomas the Tank Engine, the children’s book series and its spinoffs, for reviving the rails.

In the American West, there’s no end to railroad adventures, from narrow gauge excursions (Colorado’s Durango & Silverton Narrow Gauge Railroad) to museums (California State Railroad Museum). The joining of the Transcontinental Railroad is re-created seasonally at Golden Spike National Historic Site in Promontory, Utah, but don’t forget Amtrak, which partners with the National Park Service for a “Trails and Rails” lecture program on many routes.

Colorado historian Joyce B. Lohse’s then-six-year-old son—decked out in cowboy boots and hat—entered a store after returning home from a dude ranch adventure at Montana’s 63 Ranch. “The gentleman behind the counter patted him on the head and said, ‘Maybe some day you will ride the range,’” Lohse says. “Charlie … looked him square in the eye and proudly said, ‘I already did.’”

Most ranches still focus on families, and some ride close to history.

As a child, Tony Ritter traveled with his parents to see as many ghost towns in Montana as possible. “They had only three cassette tapes and one of them was the Oak Ridge Boys. After 1,500 miles of ‘OOM Boppa Mow Mow,’ I wanted to hang myself,” Ritter jokes. Those trips must have worked. One of Ritter’s current projects is a Western, Get Out of Dodge.

“Reading about history is informative and illuminating,” says Nathan King, a park ranger charged with interpretation and education for North Dakota’s Theodore Roosevelt National Park, “but nothing compares with actually being in the place where a historically significant event occurred.”

Museums have a tendency to be hands-off and keep-quiet—tough concepts for a seven year old—and all about dead people. Living history museums, on the other hand, are great ways to make history come to life. So are mountain man rendezvous re-enactments.

“One of the recurring experiences teachers have is children who, for the first time, confront their own past on a personal level and wonder ‘Did one of my family walk the trail, live in a sod house or hunt for their food?’” says Ann Atkins, director of education at the Stuhr Museum of the Prairie Pioneer in Grand Island, Nebraska. “As a first grader stands and stares at a live buffalo on our grounds and hears stories about how buffalos were hunted, a respect for history grows in that child’s heart. We hope to have them leave with more questions than what were answered because we’ve raised their curiosity on a personal level.”

Gage Skinner, meanwhile, is a mountain man buff in Southern California who stays heavily involved in teaching history, and he is a big proponent of the rendezvous. “It’s the closest thing they’re going to find to mountain man history, and to history in general,” he says. “It’s living history.”

Riders in the Sky’s Ranger Doug (a.k.a. Douglas B. Green) can’t stop singing the praises of music as a device to hook kids on history.

“I’ll never forget hearing ‘Cool Water,’ sitting in front of the radio,” he says. “I could just see that shimmering mirage and the old prospector! If you can catch kids young enough, I think interest can be sparked; I love to see young parents—many of whom, these days, came to our shows when they were kids—bringing their kids to hear live music.”

Wofford College’s Ted Monroe and Jeremy Jones used film and fiction in an interim course in January to teach the American West to college kids in Spartanburg, South Carolina.

“I try to show them that the literature and films of the West speak to the heart of the society we live in, and that they offer us an understanding of the past, a roadmap to the future,” Jones says, “and most of all an understanding of ourselves right now.”

Even Hopalong Cassidy has his admirers. Eight-year-old Jesse Cain of Fayetteville, North Carolina, has been hooked on Hoppy since he was four.

“I had such a good childhood, and I wanted [my children] to know a little bit about how I grew up,” says Jesse’s mother Christi, a preschool teacher. “We just teach him the old ways. You can’t tell Jesse that Hopalong’s not real, like Doc Holliday and that crowd. He understands all that, knows he was an actor, but he believes in his mind that Hoppy was real.”

Why not Gene Autry or Roy Rogers? “I asked him,” Christi says, “and he said, ‘Mama, I like them all right. But, Mama, it just don’t seem like they’re getting anything done with all that singing they do.”

Movies have often turned youngsters on to history. It’s as easy as 2+2=4, Monroe says (he is, after all, a math professor).

TEN EVENTS FOR YOUR COWPOKES

7. HOLIDAY PAST TIMES (Ruidoso Downs, NM): A Victorian Santa at the Hubbard Museum of the American West. Holiday Season

10. TECUMSEH! (Chillicothe, OH): Complete with horses and cannon (too intense for kids six or under). Through Aug. 29

Chiricahua National Monument (Willcox, AZ): What kid wouldn’t want to wander around an ancient volcano that has created a sea of hoodoos?

Chisholm Trail Heritage Center (Duncan, OK): Plenty of buttons to push as your kids learn about the cattle drive era.

Colorado Railroad Museum (Golden, CO): Celebrating 50 years of entertaining kids with themed trains like a “Day Out With Thomas.”

Davis Mountains State Park (Fort Davis, TX): A local family deeded the original portion of this park so that your family could enjoy it.

Desert Caballeros Western Museum (Wickenburg, AZ): Youth 16 and under get to experience Western art and dude ranch history for free.

Fort Abraham Lincoln State Park (Mandan, ND): At Custer Christmas, show the kids the Custer House and take them on a sleigh ride.

National Cowgirl Museum and Hall of Fame (Fort Worth, TX): The simulated bronc ride is a big hit with the kids.

National Museum of the American Indian (Washington, DC): Children get a kick out of seeing ancient native toys and games like a Lakota game wheel and stick, and a Winnebago male doll.

Mark Twain Boyhood Home & Museum (Hannibal, MO): For those aspiring writers of yours, with their dog-eared copies of Huckleberry Finn.

Museum of the Fur Trade (Chadron, NE): Introduce your children to a time when skins were money.

Museum of the Mountain Man (Pinedale, WY): The July 9-12 Green River Rendezvous is a kid’s paradise.

Old Tucson Studios (Tucson, AZ): Kids love to play-act gunfights at this historic frontier town movie set, and they can pan for gold here too!

Palo Duro Canyon State Park (Canyon, TX): Outdoor classroom programs that will get your kids digging in the dirt … for good reason!

Pony Express National Museum (St. Joseph, MO): Kids always get a kick out of hearing that boys as young as 11 delivered pony mail.

Sam Houston Memorial Museum (Huntsville, TX): Children get a chance to “work and play on the farm” in the fall and winter, with tours throughout the year.

Steamboat Arabia Museum (Kansas City, MO): “They dug that up out of a cornfield? WOW!” Looks of awe guaranteed.

Texas State Railroad (Rusk, TX): The Lone Ranger will save the day from bandits on special rides during the month of August.

Wyoming Territorial Prison (Laramie, WY): Embark on a family scavenger hunt at the jail where Butch Cassidy served his time.