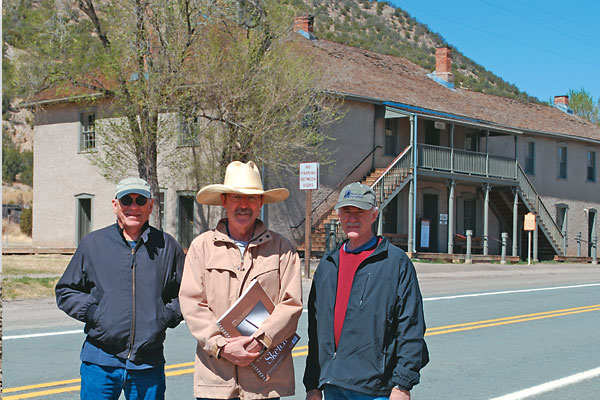 Chances are you’ve never heard of Mrs. Nettie M. Dickson of Arrow Rock, Missouri. You may not have heard about Arrow Rock, for that matter.

It’s high time you did. For Nettie—once described as a “gracious lady of the old school”—was a pioneer in preserving history in the Show Me State. In doing so, she blazed a trail that others have followed, not just in Missouri but also across the West.

The story starts on a bluff above the Missouri River. Lewis and Clark came through the area on their journey. Countless others traveled by in later years on the Santa Fe Trail. Many of them stopped in Arrow Rock, founded in 1829; Joseph Huston built a saloon-restaurant-hotel to meet their needs in 1834. By the 1860s, the town was a vital river port with about 1,000 residents.

Arrow Rock leaders had a big dream for the future, but it wasn’t to come true—the railroads bypassed the town, and so did major bridge projects and national highways. People moved away. The village remained frozen in time—no new development and the old buildings crumbled. The town’s history and legacy were in danger of being lost forever.

Nettie was not going to let that happen. A native of Arrow Rock and an active member of the National Old Trails Association (a local predecessor of the Daughters of the American Revolution (DAR), Nettie led the group in a project in 1912: the association gathered antiques and historic memorabilia and placed them in a storeroom of the Huston Tavern “as a means of teaching Missouri history to the passerby.” A few years later, she bought the building to save it from the wrecking ball.

Her big idea? The Tavern belonged to everyone. Using her DAR clout, Nettie convinced the Missouri legislature to buy it from her for $5,000. It was the first time the state had purchased a structure for historic preservation purposes; it wouldn’t be the last.

Missouri then made the DAR (and Nettie Dickson) custodian and manager of the Tavern. One of its first tasks: restoration of the facility, which was completed in 1928 at a cost of $20,000. The Tavern not only provided food and lodging, but also was a living history museum with DAR members interpreting history to visitors.

By 1926, with a strong push from Nettie and the DAR, Missouri bought more property around the Tavern and designated it a State Historic Site. Encompassing 167 acres, the site includes the 1835 courthouse, the town doctor’s 1845 home and the 1873 stone jail.

This story didn’t end when Nettie died in 1949. A decade later, the Friends of Arrow Rock organized to preserve other historic structures; it now owns and operates fourteen 19th-century buildings, including homes, a gun shop and a Masonic lodge. Partnering with the state, the Friends provide walking tours of the village, as well as educational programs. In 1964, the National Trust designated Arrow Rock a National Historic District.

Today, the village (population 79) is more than a bunch of old, well-maintained buildings. It’s a bustling place of cool shops, restaurants and bed and breakfasts. An old church has been converted into the noted Lyceum Theatre. Tourism is big business, as about 135,000 folks visit each year to experience the heritage of this remarkable place. Appropriately, the Huston Tavern still serves meals to travelers.

Nettie Dickson, Arrow Rock and the Huston Tavern are a striking example of what an average citizen can do to preserve our American West heritage.

Here’s a photo essay of some important sites that dedicated citizens have saved throughout the years. If we were at the Huston Tavern, we’d raise a glass in honor of all the future Nettie Dicksons whose passions and dedications to our heritage will inspire even more preservation wins.

1834
Joseph Huston, a civic and business leader originally from Virginia, constructs a brick building that welcomes guests with meals and lodging. The Huston Tavern becomes an important stop for immigrants heading west on the Santa Fe Trail.

1923
The state of Missouri buys the Tavern from Nettie Dickson—the first time the state acquires a property specifically for historic preservation.

2009
The Huston Tavern is a restaurant and meeting place in the town of Arrow Rock, a National Historic Landmark and a tourist destination renowned for its well-preserved, 19th-century buildings.

1836
Henry Hastings Sibley (see inset photo, in his Civil War uniform)—who will become Minnesota’s first governor in 1858—builds a stone house that also serves as a regional headquarters for the American Fur Company, of which he is a partner.

2009
The Sibley House Historic Site is a museum, offering interpretive guided tours through the Sibley home and other adjacent historic structures. The Sibley House itself is the oldest private residence in Minnesota.

1888
A two-story Italianate structure is built on the site of the original courthouse, which burned three years earlier. The northeast Arkansas location is a vital shipping port on the Black River.

2009
The courthouse (part of the Powhatan Historic State Park) is an interpretive museum, restored according to the original architect’s plans in 1970 and 2005.  Exhibits tell the story of the history and culture of the region.

1844
Métis (mixed blood) pioneer Antoine Gingras builds a home and a fur trading post in the Dakota Territory, just a couple of miles from the Canadian border. He goes on to become a key figure in regional business and politics.

2009
The restored Gingras home and trading post are the oldest standing structures in North Dakota. They feature interpretive exhibits about Gingras, Métis culture and the fur trade.

1857
Michael Hanley buys a 39-acre farm and builds a house on the property. For about 100 years of its history, the farm is owned and operated primarily by women in the Hanley family.

2009
The Hanley Farm is owned and operated by the Southern Oregon Historical Society. It includes the original house, barns, gardens, exhibits of farm equipment and the sale of heritage plants and produce.

1927
Furnace Creek Inn, a Spanish mission-style resort, is opened by the owners of Pacific Coast Borax Company, famous  for its 20 Mule Team Borax soap. In the 1880s, mule teams did carry borax out of Death Valley.

2009
Current inn owner Xanterra Parks & Resorts has built a solar power facility that will produce about one-third of the electricity needed at Furnace Creek. This will help preserve the unique Death Valley environment that still draws visitors to the area.

1873
Doors to the territorial prison are opened wide for hardcase residents, who will include outlaw Butch Cassidy and some of his Wild Bunch buddies over the next 30 years.

2009
Named a State Historic Site five years ago, the prison is a museum featuring 10 heritage buildings (seven of which are original), artifacts and exhibits. Visitors are allowed to come and go as they please.

1894
Land rusher Marshall McCully—like so many others who’ve staked a claim in the Cherokee Outlet—builds a small, two-room home, made of buffalo grass bricks. Renovation is an ongoing effort. He is shown standing outside the soddy in the 1950s; he dies at the age of 93 in 1963.

2009
The Oklahoma Historical Society owns and operates the sod house as a museum, featuring McCully family artifacts and interpretive presentations. The building is the only sod house left from that period and is on the National Register of Historic Places.

1850s
Mormon pioneers build an agricultural community near the geographic center of Utah. Spring City is a diverse cultural community, and its architecture reflects that with Scandinavian and various American building styles.

2009
A renovation and preservation renaissance, started in the 1970s, makes Spring City perhaps the greatest Utah repository of architecturally significant buildings from the pioneer and early 20th-century eras.
And all are in use.

1873
W.C. Gallaway begins operations at the water-powered Neligh Mill, which allows local farmers to grind their cereal grain crops into the more versatile form of flour and provides that flour to the settlers for use in bread and other baked goods.

2009
The Neligh Mill State Historic Site is a museum, commemorating the history of flour processing and farming in the area. Owned and operated by the Nebraska State Historical Society, it is the last mill in the state with all original parts.

1650-700 B.C.
Native peoples construct a complex array of earthen mounds and ridges overlooking the Mississippi River flood plain, probably as foundations for dwellings. They are some of the largest prehistoric earthworks in North America.

2009
The 400-acre state park and national monument in northeast Louisiana is one of the most important archaeological sites in the world. Revegetation of the area has taken place as part of the state park’s maintenance. Visitors enjoy an interpretive museum and guided tours.

1874
Lawrence Murphy and James Dolan build a mercantile store. It is converted to the county courthouse by 1880 and gains its greatest fame the next year: Billy the Kid kills two deputies during an escape from the building, which also houses the jail.

2009
The historic courthouse is now a museum, telling the story of the Lincoln County War and the town it made famous. The courthouse is part of the Lincoln State Monument, which includes 17 structures. Lincoln itself is a National Historic Landmark. Standing in front of the courthouse are three Western artists Ed Mell, Bob Boze Bell and Gary Ernest Smith.

1849
The army constructs the first building at Fort Vancouver—the commanding officer’s house. Ulysses S. Grant frequents it during his stint there as quartermaster in the 1850s, but he never lives there.

2009
The city of Vancouver bought and rehabbed the historic fort’s buildings back in the 1980s. Many of them are rented as residences or businesses. The Grant House—which is open to the public—houses the Restaurant at the Historic Reserve.

– Courtesy Restaurant at the Historic Reserve –

1862
Johnny Grant builds a combination trading post and residence on his cattle ranch. In 1866, he sells it to “Cattle King” Conrad Kohrs.

2009
The ranch is now a National Historic Site, encompassing 1,600 acres and more than 80 historic structures—including the ranch house, with the elegant furnishings bought by Con Kohrs in the 19th century.

1865
Fort Fletcher (later renamed Fort Hays) is built to protect stagelines, railroads and pioneers from Indian attacks. George Custer’s 7th Cavalry and the Buffalo Soldiers of the 10th Cavalry will be based there at various points.

2009
The fort is a State Historic Site, featuring four original buildings (the blockhouse, guardhouse and two officers’ quarters), along with a museum that was opened in 1967. Visitors can see military, pioneer and Indian artifacts and exhibits.

1927
The United Verde Hospital—an engineering marvel, built on a hillside—begins accepting patients in this mining town. This is one of the most modern and well-equipped hospitals in the West.

2009
The Altherr family owns and operates the Jerome Grand Hotel, the centerpiece in a town that has changed little in more than 100 years and is now a National Historic Landmark. The mines are gone; tourism rules.