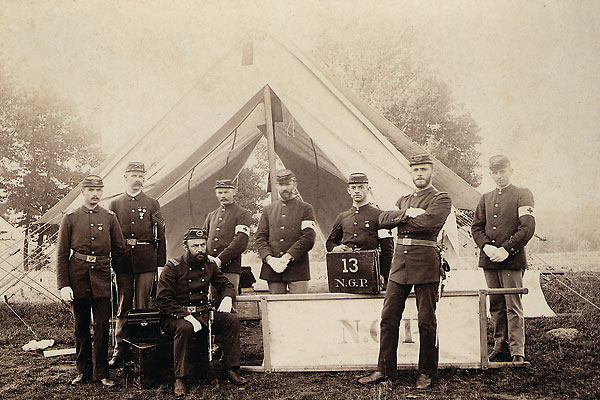 The old rancher carefully studied the index finger of his left hand where he had sustained a deep splinter four days earlier.

He knew that his finger hurt a bit when he bumped it and that it was somewhat red and swollen. He thought he had removed that fence post splinter, so he was not quite certain why he felt a little feverish and his finger kept throbbing. More noticeable was the very faint pinkish red streak that had appeared on the backside of his forearm, along with some tender small bumps near the “funny bone” of his elbow.

He decided to dig around a little more with the blade of his pocketknife; but after a couple of minutes and a lot of pain, he had found no residual splinter, even though a small amount of yellow pus had emerged from the angry wound. Downing a couple of shots of whiskey, he decided to go to bed and check his finger in the morning. By three a.m., he awoke with nausea and a high fever, calling his wife for water to quench his terrible thirst. Before suppertime the next day, even before tetanus could set in, the rancher became a customer for the nearest mortician.

Our unfortunate rancher died within five days of his seemingly minor injury, having developed “blood poisoning” or sepsis. The bacteria that made it into his bloodstream were most likely streptococcus (strep), staphylococcus (staph) or even E. coli from the barnyard. The bacteria had probably been on his skin or his trusty pocketknife. The wound “festered” with bacterial growth in the immediate tissue, while white blood cells had come to the site to kill bacterial invaders. The wound abscess filled with yellow pus, derived from white cells, body serum and dead or viable bacteria.

About three days before his death, the bacteria had escaped the tissue and migrated into his lymph system, where they began to cause inflammation in the lymph nodes (“glands”) near his elbow and along his forearm where it was visible as that ominous, pinkish red streak. From his lymphatic system, the bacteria had migrated into his venous system. It pumped through the heart to the lungs, then back to the heart and out into the arterial circulation, where the bacteria were free to multiply. At the time of his death, the rancher had massive infections in his liver, kidney, lung and brain. In the pre-antibiotic frontier era, cauterization of the wound or topical folk remedies would not have been adequate treatments, once the infection became blood borne.

History is full of tales of death by blood poisoning. One on the frontier is that of outlaw Sam Ketchum, elder brother of fellow outlaw Tom “Black Jack” Ketchum. Sam died of blood poisoning on July 24, 1899, eight days after being shot by a posse tracking him for the holdup of Train No. 1 near Folsom, New Mexico. Another was the death of our 20th President James A. Garfield, who died of blood poisoning on September 19, 1881, after surviving a gunshot wound on July 2. History records that the first physician on the scene, Dr. Willard Bliss, stuck his unsterilized finger into the wound track to probe for the slug. The good doctor’s examination technique should leave little doubt about one reason that Chester A. Arthur became our 21st president before the first day of autumn!

Modern antibiotic therapy would have probably saved both Sam Ketchum and President Garfield. The problem today is that decades of overuse of antibiotics have left us with some bacterial enemies (especially those found in hospitals) that can sometimes survive even the most aggressive antibiotic therapy. Combining this bacterial resistance with the increasing chances of treating a patient with a compromised immune system (e.g. HIV) has allowed the problem of sepsis, under some circumstances, to regain momentum.

Regardless of such challenges, dear reader, please have faith. When we physicians combat rogue bacteria like methicillin resistant staph aureus (MRSA) or “flesh eating” streptococcus, we are not nearly as “clueless” as was the good Dr. Bliss.