How I Ruined My Kids for History 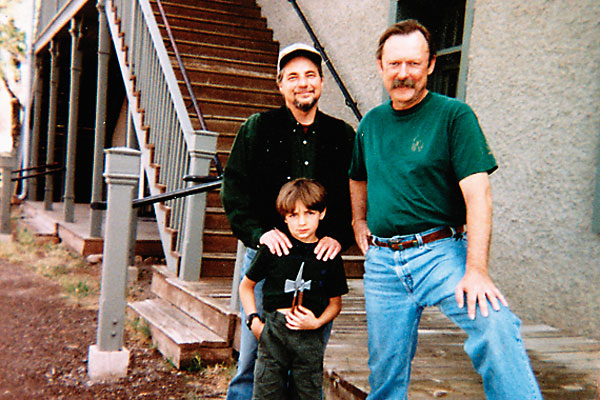 On car trips my father would only stop for gas, food, oil and maybe, open wounds.

He hated to stop. And even though every summer we were on The Mother Road (Route 66!), my dad was hell-bent to get to Iowa so we could eat five times a day and talk about crops.

Every year we drove by the sign in eastern New Mexico that stated Billy the Kid’s grave was only 53 miles thataway. For the better part of two decades, my father never heeded my pleading and we never made it to Fort Sumner. I vowed it would be different with my kids.

In 1984 Kathy and I gassed up the Ford Econoline, loaded the kids in and took off for New Mexico. We had to fight our way through a hailstorm near Vaughn, New Mexico, but we made it to the famous gravesite at dusk of the second day. After telling my kids the importance of this resting place of the most famous outlaw in the West, I drove all night to make it to our next stop, the Dalton’s hideout in Meade, Kansas. A couple dozen stops later my four-year-old daughter Deena asked, “Why do we have to stop all the time?”

As the years wore on, my kids also grew tired of my pontificating at great length why this was a myth and why that didn’t really happen the way they tell it in movies. By the time they were teenagers I had lost them completely. I wondered how I could have gone so wrong.

Years later I met a master motivator (granted, he is a professor and it’s his job) who taught me a valuable lesson. Ironically we were in Lincoln, Billy the Kid’s town. As we walked down the street with his son, the boy would ask questions about my narration. For example, at the spot where Sheriff Brady was ambushed, the boy asked, “Daddy, why did Billy shoot the sheriff?” Paul Hutton replied, “Because he was evil and needed to be killed.” I blanched. That was clearly not even close to the truth of the event. When we were alone, I confronted Paul about the dichotomy. He smiled and said, “Always tell them the legend. Then, if they’re interested, they’ll want to find out for themselves, and they’ll be hooked.”

This was made even more clear by a great quote in our cover story: “The trick,” says screenwriter and producer Tony Ritter, “is to make the West interesting, but don’t shove it down the kids’ throats…. Tell them it’s a big secret and you shouldn’t talk about it. It gets them every time, like a curious monkey.”