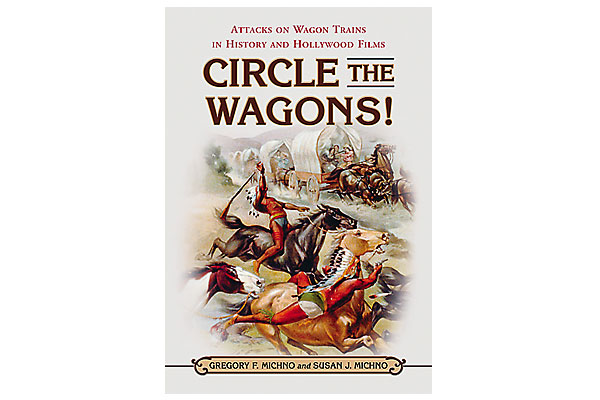 An interesting book, Circle the Wagons! is a deliberately controversial one, combining early Western movies with actual events in an effort to correct what the authors see as a willful misreading of history.

Gregory & Susan Michno, who also co-authored A Fate Worse Than Death: Indian Captivities in the West, 1830-1885, would like readers to understand that the authentic history of the West, as it specifically relates to encounters between Indians and wagon trains, stagecoaches, cavalry and settlers, has been subverted in the last few decades to make the Indians look good at the expense of the cowboys.

They want us to know that the classic image of the marauding, massacring Indians, seen time and again in an earlier era of Western movies, is a more accurate portrait than what came about in the later decades of the boomer generation, when a “combination of the Civil Rights movement, the Feminist movement, the backlash against the war in Vietnam and the general distrust of the military-industrial complex” not only made American Indians more sympathetic, but also reversed the moral high ground. The Michnos report, “The white and black hats were switched, and the new black-hatters were being vilified more than the Indians ever [had been].”

Arthur Penn’s 1970 film Little Big Man, Robert Altman’s 1976 movie Buffalo Bill and the Indians, and books like Dee Brown’s Bury My Heart at Wounded Knee, which the authors feel is “rife with distortions, omissions and selective evidence use,” are cited as primary culprits in this war on American history.

The Michnos are also a little ticked that the newer cinematic permissiveness of the era made it possible to show graphic violence perpetrated against Indians, but that films of prior decades were obliged to practice restraint.

In order to wrench the past back from revisionist historians and filmmakers, the authors have fashioned in their book a catalog of atrocities committed by various tribes throughout the 19th century. Most of the chapters in the book offer detailed and gruesome examples of documented Indian attacks, which are then tied to older movies that portray similar events, reaching as far back as Tom Mix’s 1907 Attack On an Emigrant Train. Some of these films come close to re-creating real incidents, but some of the Michnos’ other examples are a looser fit.

At the close of one chapter, for example, we’re told a pair of anecdotes about faithful dogs, which invites a comparison to Rin Tin Tin. In another section, we’re told a story about a group of skittish nuns who managed their trip across Kansas without incident, which is coupled with the movie Two Mules for Sister Sara. (Clint Eastwood rescued Shirley MacLaine, a prostitute disguised as a nun, from some vile Mexicans.) “Thankfully,” the chapter concludes, “there were few instances of nuns being attacked on the trails, and even fewer films about them.” Thankfully, indeed.

I say it’s an interesting book, because any effort to tag movies with the real events that may have inspired them is fascinating. Circle the Wagons! is different than other books that compare Hollywood’s versions of historical events with the facts. It is so politically polarized, and determined to remove whatever romanticized notions we may have cultivated about American Indian culture, in the hopes of returning to us a similarly romanticized version of the West (in effect, returning the black and white hats to their proper noggins). That we may have reached a point in time when history deserves a more complex coloration seems to have escaped the authors.

The Michnos admit in passing that, “all parties could more accurately be painted in shades of gray,” but that tiny concession quickly steps aside as they conclude the book with an exhausting diatribe on how we (whoever that is) are “in danger of becoming what the books and movies of late tell us we are: gun-toting, guilt-ridden self-haters living on false legends.” They recommend that we have a chance at saving the situation if we once again “circle the wagons and give it our best shot.”

One miniseries that comes to mind that actually took pains to add a layer of complexity to the relationships between the government, the army and the Indians is the HBO-produced adaptation of Bury My Heart at Wounded Knee. (The Michnos feel the book “trampled the one-time soldier/cowboy into the dirt.”) The show also took time to reiterate the Sioux’s history of violence and aggression against other tribes. History would be better honored by following this, or a similar course, to make an effort to establish some greater measure of truth. To “circle the wagons,” as the Michnos advise, strikes me as a calculated and unfortunate leap in the wrong direction.