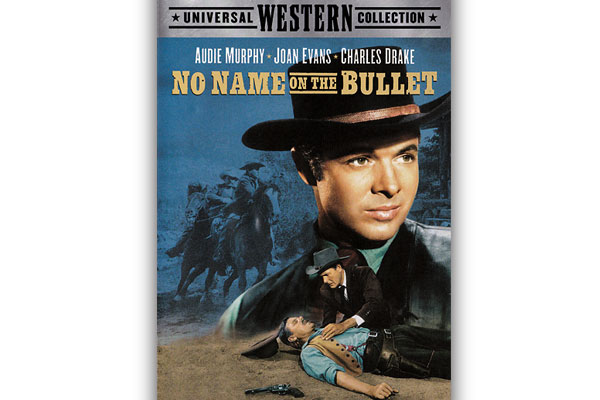 About 30 years ago, my younger sister Pam had to write an essay on a “hero” for NYU.

She chose Bruce Springsteen. I said, “I like Bruce, but he even says ‘I ain’t no hero, that’s understood.’  How about Audie Murphy?” Pam asked, “Who’s Audie Murphy?”

Who’s Audie Murphy?  Just the most-decorated war hero of WWII, that’s all. He single-handedly took on a 200-infantry strong German tank brigade, earning himself the Medal of Honor. His war memoir, To Hell and Back—made into a film in 1955 starring him as himself—was Universal’s highest-grossing film for the next 20 years, until Jaws came out in 1975.

Murphy was the unlikeliest of Western movie heroes. This 120-pound, five-foot-four man had a deep streak of melancholy from his war days; his baby face had real character.

Murphy starred in more than 40 movies, 35 of which were Westerns, and most were successful. Probably the best of them is No Name on the Bullet.

I saw this film on TV when I was a kid of about 12.  When I saw it again a few years ago, I realized, to my chagrin, that I had completely ripped off the basic plot for a script I wrote called Cycles, which I ended up selling for quite a lot of money. Sadly, it was never produced.

In No Name on the Bullet, a hired killer comes into town obviously gunning for somebody. But who? Suddenly, every person in town with a bad conscience begins to panic. It’s a great set-up.  Good enough to steal, I’d say.

And Murphy, with his grim baby face, just nails the part of the killer. He’s honestly and truly scary. When he says he’s going to kill somebody, he means it.

The movie is solidly directed by Jack Arnold, best known for directing The Creature from the Black Lagoon, and written by the incredibly interesting Gene L. Coon, who wrote/produced 38 episodes of the original Star Trek series and invented Klingons.

Murphy died just before his 47th birthday in a plane crash while he was scouting movie locations. He was a real hero, and not a bad actor, either.