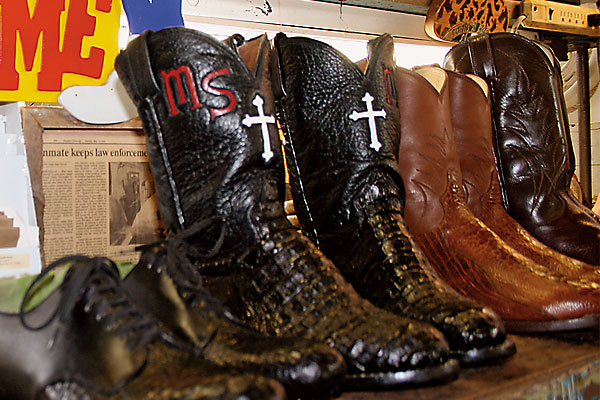 Arnold Darby is in a great mood the day I arrive in Huntsville, Texas, to talk about his custom bootmaking business…with good reason.

After serving 37 years in the Texas penal system, Darby has just learned that he’s being paroled.

“This is the shoes I’m gonna wear when I go home,” says Darby, while standing in the Goree Unit’s craft shop, pointing to a pair of handsome alligator dress shoes. “I feel good.”

In 1974, Darby was convicted of robbing a drug store. “I’d been down twice before,” he admits, so he received a life sentence as a habitual criminal.

“But that’s not the reason I stayed 37 years,” Darby points out.

The Texas prison system in the 1970s was no place to be. “When I got my life sentence, I only had to do 10 years,” he says. “Three years later, you had to do 20 flat years. Most people had never done 20 years for the most heinous crimes there was, and here are these people, maybe they’d never been in trouble before, and got aggravated life sentences, 20 flat years. You created a lot of hatred. From there came the gangs. The combination was an awful lot of violence.”

Darby knows. As a member of the prison gang, Texas Syndicate, he killed two inmates, one of whom was a former gang member who had testified for the government. Hence, 37 years in prison.

But he learned something else in prison. Making cowboy boots. Since 1994, he estimates he has made roughly 1,000 pairs, mostly for law-enforcement officers.

Making boots in prison helped Darby “escape” (pardon the pun) from Huntsville. “Your life kinda revolves around occupying your mind in here,” he says. “And an inmate is no different than anyone else. They get satisfaction from making something that turns out well.”

Darby’s story is not unique.

Matt Hackett, who runs Matt Hackett Buckles & Accessories in Richmond, learned his trade after “a little problem with drugs and alcohol” landed him in the Texas pen in 1985.

“I realized I had a built-in clientele,” he says. “They could either buy a $5 buckle from our factory or Tandy’s or somebody, or I could make one. I just started making them from either stainless steel or nickel silver. I spent all my time in the craft shop instead of watching TV and playing dominoes.”

Hackett also became a favorite of law-enforcement officers while in prison. Since getting out in 1995, silversmithing has “turned into a fairly enjoyable way to make a living.” He has made buckles for presidents  to actors.

It helps, of course, to have legendary Texas Ranger Joaquin Jackson wear your silver buckle on the cover of Texas Monthly magazine. “I am proud,” Jackson says. “This man paid his price to society.”

Like Hackett, Darby knows he isn’t the same angry man who entered prison. “I am a changed person,” he says. Looking at him, a quiet man with a light in his eyes when he shows off the boots he’s working on, I find it hard to imagine him murdering two inmates.

Released in late June, Darby plans to open up a bootmaking operation in Center, Texas. He knows living and working beyond the walls will take adjustment. “I still haven’t gotten over it completely,” he says.

I have to ask: What was it like to hear that life sentence 37 years ago and now hear that you’re going home?

“Both were extremely shocking,” he says. “I was only 25. I’m 62 now. It was like the end of the world when they gave me the life sentence. It’s like a rebirth now.”

Contrary to popular belief, Johnny D. Boggs has spent time in various prisons across the United States only while on magazine assignments.