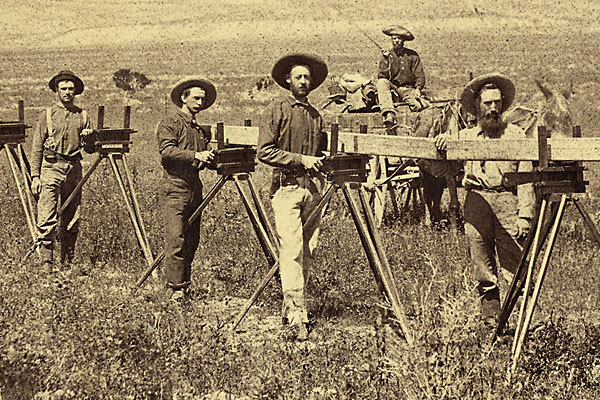 Or, while waiting for the plumber to show up, the Land of Mañana. Type A personalities don’t last long here.

State constitutions were drawn up in 1850, 1872 and 1889, but Congress rejected statehood each time. In 1910, New Mexico tried again, and residents approved a constitution on January 19, 1911, which they sent on to Washington, D.C., where Congress gave its okey dokey on August 19. On January 6, 1912, President William Howard Taft made it official. New Mexico became our 47th state.

Some of us believe it’s our best state. Here are 25 reasons why:

2. Doña Ana County Historical Museum of Lawmen
If you have no qualms about stepping inside a law dog’s office (the museum is inside the county sheriff’s department), this is worth a stop. No, you can’t sit behind Pat Garrett’s desk.

3. Historic Old Mesilla
This nearby border-town village, once the gateway to southern New Mexico, is like stepping into history. Billy the Kid was tried for murder here (ahem, it wasn’t a gift shop then), and the shops and restaurants make Mesilla a desert mecca.

4. Pancho Villa State Park
South of Deming in Columbus, this park is a great place to learn all about Mexican Gen. Francisco “Pancho” Villa’s March 9, 1916, attack on the border town that left 18 Americans dead.

5. Deming Luna Mimbres Museum
Learn more about that 1916 raid and the Army’s Punitive Expedition into Mexico at this Deming landmark, a National Guard Armory where troops slept when it was unfinished. The building was completed two months after Pancho Villa’s Columbus raid.

6. Shakespeare Ghost Town
South of Lordsburg, this village boomed in the late 1870s after a silver strike, attracting vagabonds such as John Ringo and Curly Bill Brocius. Guided tours are held, but check the dates before your visit.

7. Silver City
Drive north to Silver City, a mountain mining town that’s now home to several artists and a lot of history. Billy the Kid hung out here as a, well, kid. Catherine Antrim, Billy’s ma, is buried at Memory Lane Cemetery. A cabin (donated by director Ron Howard after filming The Missing) stands at Murray Ryan Visitor Center near where the Antrims lived. You’ll find much more history here than the Kid’s. The outstanding collection of Mimbres pottery at the Western New Mexico University Museum is a must. Get your Army history fix at Fort Bayard. Then cool off with Italian ice cream at Alotta Gelato.

8. Gila Cliff Dwellings National Monument
A hundred years of statehood is nothing. North of Silver City, spend a couple hours at Gila Cliff Dwellings, home of the Mogollons who called these mountains home from the 1280s to the early 1300s. They definitely had a view. The national monument is surrounded by the scenic Gila National Forest and rests on the edge of the nation’s first designated wilderness area, the Gila Wilderness.

9. Hillsboro
Yep, another quasi ghost town, but you can’t beat the roller-coaster ride through the Black Range. Check out the ruins of the Sierra County Courthouse where Oliver Lee and James Gilliland were tried for murder in 1899 in one of the West’s greatest unsolved mysteries. Those tough hombres were thought to have murdered lawyer Albert Fountain and his young son in 1896. Pat Garrett was a star witness for the prosecution, but the jury acquitted both men.

10. Fort Selden
While heading south back toward Las Cruces, swing by this state monument in Radium Springs. The fort was established in 1865 and remained active until 1891. It’s probably best known as the home to Buffalo Soldiers, but the fort’s most famous resident was a white kid. The WW II hero Douglas “I Shall Return” MacArthur lived here in the late 1880s when his father was post commander.

12. Lincoln County
Back to Billy the Kid. Start off in Ruidoso, more Swiss than Southwest. Once you’re feeling refreshed, head to Lincoln, another quaint village that hasn’t changed much since the 1870s, although not as many people are shot down on the streets these days. Seventeen buildings are part of the state monument, including the Lincoln County Courthouse and John Tunstall’s store. If everything you know about Billy and the Lincoln County War comes from Chisum and Young Guns, you’ll learn the true—and far more interesting—story.

13. Smokey Bear
Amid all this violence, one New Mexico hero has never rustled cattle or shot anyone. In Capitan, pay respects to Smokey Bear at a state park named in his honor. The black bear cub, rescued after a 1950 forest fire, became a fixture for fire prevention and spent 26 years at the National Zoo in Washington, D.C. After his death, he was buried here. Remember: Only you!

14. Trinity Site
Enter the Nuclear Age at the Trinity Site on the White Sands Missile Range south of Bingham (which, as far as I know, isn’t named after New Mexico’s singing-songwriting sensation Ryan Bingham). On July 16, 1945, the first atomic “gadget” was detonated here. On the first Saturdays in April and October, the site is open to the public. More than 60 years later, it’s only mildly radioactive. How do you define mildly?

15. San Antonio
Having seen the great Sci-Fi classic Them!, I’m always on the lookout for giant ants when I drive across this country. So if you reach San Antonio—where Conrad Hilton got into the hotel business—alive, celebrate with a green chile cheeseburger. Tough choices, though. Do you stop at the Owl Bar or Buckhorn Tavern, both renown by carnivores?

16. Fort Sumner
Pay respects to Billy the Kid. He met his end (sorry, conspiracy theorists) at Pete Maxwell’s place at Fort Sumner and his grave is open year round. (Don’t fall in, the locals joke.) You’ll find two Billy museums in town, but the museum you shouldn’t miss is the Bosque Redondo Memorial, which tells the terribly tragic story of the Navajo and Mescalero incarceration here during the 1860s.

18. Gallup
At the Indian capital of the Southwest, hit a few trading posts and pawn shops. If you can’t find it at Perry Null’s, Richardson’s or Shush Yaz, it probably doesn’t exist. And while New Mexico’s film incentive program has garnered a lot of attention, Gallup is film history, from classics like Ace in the Hole and Colorado Territory to tons of B-Westerns from the 1950s. Hike Red Rock Park and see how many film locations you can recall. Then spend the night at El Rancho Hotel, once home to the stars.

19. Navajo Country
Seeing the Navajo Nation in person is better than even reading a Tony Hillerman novel. On the drive north, stop in at trading posts such as Two Grey Hills and Toadlena.

20. Chama
Things remain Western in this town, and one of the best ways to experience it is by riding the Cumbres & Toltec Scenic Railroad, built in 1880. It’s considered the highest and longest coal-fired, steam-operated, narrow-gauge railroad in the country.

21. Taos
It’s not the largest city in the state, but Taos might be the most famous (and I live in Santa Fe). Everyone from Taos master artist E.L. Blumenschein to author D.H. Lawrence to Hollywood stars Dennis Hopper and Julia Roberts to scout Kit Carson (who is buried here) have called Taos home. It’s an art mecca (Harwood Museum of Art, Millicent Rogers Museum) and a great place for history buffs (La Hacienda de los Martinez, Kit Carson Home & Museum).

22. Cimarron
More than Boy Scouts (for Philmont Scout Ranch) come here. History buffs love the Old Mill Museum and the Kit Carson Museum (down the road in Rayado). But the biggest attraction might be the St. James Hotel, which Henry Lambert (former cook for U.S. Grant and Honest Abe Lincoln) established off of the 1872 saloon. Among the guests were Clay Allison, Black Jack Ketchum and Buffalo Bill Cody. The dining-room ceiling remains air-conditioned with bullet holes. Little wonder folks swear the place is haunted.

23. Fort Union
If adobe ruins could talk, Fort Union near Watrous would have a heck of a story. Actually, it has a great story anyway. Established in 1851, it became the largest military post in the Southwest. You can see the ruts from the Santa Fe Trail.

24. Pecos
More than 12,000 years of history is preserved at Pecos National Historical Park, from Pecos Pueblo to the Spanish mission and on to the Civil War (the battle of Glorieta Pass was fought here) and all the way to the Forked Lightning Ranch (which actress Greer Garson called home).