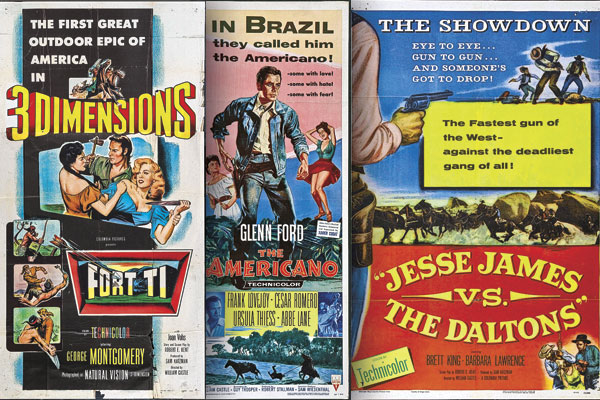 When Director William Castle was grinding through his last Western film, 1955’s Duel on the Mississippi, B-movie immortality probably wasn’t on his mind. Duel on the Mississippi was just another movie Castle would make for Columbia Pictures’ low budget-mogul Sam Katzman, shot fast and cheap, but good enough for the Bijou.

Castle had made 36 movies by that point and always delivered. A flying skeleton changed everything.

House on Haunted Hill was Castle’s Horror smash, with the gimmick of “Emergo” promising a skeleton coming right off the screen and into the audience. The promise didn’t quite live up to the reality, but that 1959 film set the Castle pattern of fun Horror flicks with outrageous promotional gimmicks, culminating in his producing the classic Rosemary’s Baby, in 1968.

Those Horror movies brought Castle the fame he enjoys today, but are only a portion of his work, which includes more than a dozen Westerns. Joe Jordan’s Showmanship: The Cinema of William Castle (BearManor Media; $26.95) is a solid, film-by-film assessment of his career, giving his Westerns their overdue attention.

Castle spent a great deal of his career at Columbia as a contract director, but not on the upper echelon. Often working with Katzman, he did the best he could with compromised budgets and schedules, while still leaving his own filmmaking mark.

In 1943, he had already helped write the story for North to the Klondike, featuring Lon Chaney, when he directed Klondike Kate. Strictly outdoor programmer stuff, taking advantage of the success of The Spoilers, Klondike Kate is more a lesson in film economy than anything else.

He would direct another 18 movies, including launching the superb Whistler Mystery series, before returning to the West in 1951’s Cave of Outlaws for Universal. Jordan quotes Castle’s lack of excitement about the assignment, but points up the importance of the atmospheric cave sequences as a prefiguration to his Horror work. Even when the scripts failed him, Castle’s visual sense didn’t.

His directorial eye was often dark, steeped in suspenseful shadows, making him perfect for film noir, but a contract man has to work in all genres. Castle developed an approach to outdoor adventures that led to the first 3-D Western ever produced and finally put him squarely on the Hollywood map.

Starring George Montgomery, who would make two more movies with Castle, Fort Ti tells the story of the battle of Fort Ticonderoga with speedy efficiency, infusing the scenes with energy and lots of flaming arrows flying at the lens, making 3-D audiences duck and scream.

One of the top moneymakers of 1953, Fort Ti set Castle up as a director of Westerns. Conquest of Cochise, another Katzman production, is a colorful, budget knockoff of Delmer Daves’s Broken Arrow, while 1954’s The Law vs. Billy the Kid is noteworthy for its script by blacklisted writer Bernard Gordon and James Griffith’s Pat Garrett.

Castle dubbed this period a “treadmill,” jumping from Westerns to swashbucklers to underworld melodramas. The films made money, but Columbia shackled him to the B unit, until he was asked to patch together 1955’s The Americano, star ring Glenn Ford.

Started in Brazil by Budd Boetticher, The Americano has Ford playing a ran cher at war with cattle rustlers. It’s standard fare, with a colorful background, but saved by Castle’s well-honed skills. He was now comfortable with the Western, and it showed. He learned by doing.

Castle would make five more movies, including two final Westerns (Duel on the Mississippi and Gun that Won the West) for Katzman, before he struck out on his own with Macabre, then House on Haunted Hill.

The Western isn’t the genre that made Castle famous, but the films he directed bear his clean visual style and always feature solid acting. Showmanship: The Cinema of William Castle sheds justified light on those lesser-known movies, allowing discovery of the Horror maestro’s other talents.