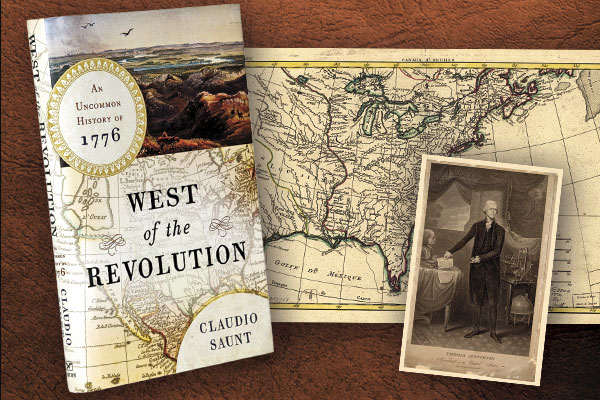 As the American colonists made their Declaration of Independence from the British monarchy on July 4, 1776, a chain reaction of political events across North America occurred simultaneously that would affect the political, economic, cultural and geographical history of the continent up to the present day.

Claudio Saunt’s West of the Revolution: An Uncommon History of 1776 (W.W. Norton, $26.95) insightfully turns conventional 18th-century American history 180 degrees and provides readers with a very accessible and concise chronicle of the historical actions, imperial settlements and political rivalries of Europeans and American Indian tribes across the northern half of the Western Hemisphere parallel to America’s war for independence east of the Appalachians. Saunt’s introduction posits that “from the Aleutian Islands to the Arkansas River, from the Black Hills to the Deep South interior, other extraordinary stories were unfolding across North America. This book invites readers to extend their bounds and discover the continent west of the Revolution.”

The strength of Saunt’s West of the Revolution is his thorough research of continental history from the perspective of American Indian tribal and regional history and the multiplicity of European Imperial powers, entrepreneurs and explorers seeking new lands, resources, treasures and alliances across North America. From early land speculation by North Carolinian Richard Henderson, who bought 22 million acres on the western slope of the Appalachians from the Cherokee, to the Lakota Sioux 18th-century movement west from Minnesota to the Black Hills, Saunt clearly demonstrates how European and American mercantilism and trade, wars and rivalries, and greed and ambition directly affected the alliances and enmities between tribes across the continent. As Saunt succinctly summarizes: “Despite the sharing of traditions among Black Hills’ residents, the Lakota arrival in the mountain uplift marked the onset of an invasion.”

In addition to how the West changed with the movement and relocation of Native peoples from the East to the West, Saunt also provides an equal understanding of how the West changed with the British, French, Russian and Spanish empires pressing inward from the Pacific Coast, Canada’s Hudson Bay and Mexico. The Spanish claimed much of the continent with its chain of missions across the American Southwest of Texas and New Mexico, but it was only in the 1770s that the Spanish crown, feeling pressure from the British and Russians on the West Coast, formally settle a presidio in Tucson in 1775, and a mission in San Francisco in 1776. The French, who lost their control of Canada in the French-Indian War with the British, also lost continental power in the West with the Treaty of Paris that divided North American claims along the Mississippi River.

Understanding 18th-century and early 19th-century North American history from the place it happens—simultaneously with the international processes occurring from the Russian Pacific West to the Napoleonic Wars, inclusive of the American Revolution and constitutional formation of the United States—broadens and deepens our understanding of how Mexico, America and Canada were created; who we are as a continent today; and what we may become in the future.