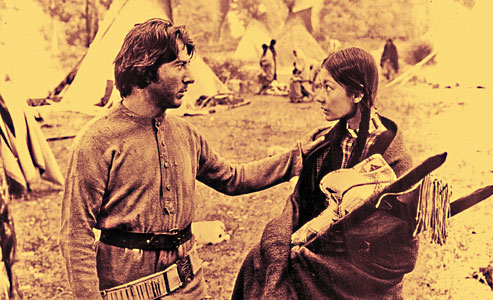 In 1992, American Heritage magazine asked historians, artists and novelists to name their favorite American historical novel. The overwhelming winner was Thomas Berger’s 1964 novel, Little Big Man, the story of Jack Crabb, a white man raised by Northern Cheyennes, who spent his life going between the two cultures and witnessed nearly every famous event of the frontier West.

In 1996, nearly 30 years after Arthur Penn’s 1970 film had catapulted Berger’s novel into a bestseller, I met Berger. I later shared my objections to the movie, which, I thought, detracted from the novel’s timelessness by making it too much into a parable of the Vietnam War.

He wrote me: “You and I are of one mind concerning the Little Big Man movie, and I was appalled by the confusion of the Washita attack with My Lai (especially since the historical example of Sand Creek was available, though, without Custer). As to [Richard] Mulligan’s two portrayals of the general [George Custer], I greatly prefer that in Teachers, but I have always been on the friendliest terms with Arthur Penn and the late Richard (the latter starred in a play of mine at the Berkshire Theatre Festival in 1970) and my career owes a lot to the success of the motion picture, so I have avoided any public animadversions on the film, which of course has many strengths, most of them, appropriately, visual.”

Critics have called Crabb the “frontier Zelig,” referring to Woody Allen’s 1983 film about a man who pops up in photographs of numerous key events of the 20th century. Berger always thought it should have been the other way around: “My novel came out nearly 20 years before Allen’s film,” he told me. “Shouldn’t Zelig have been the ‘Jack Crabb of the 20th century?’”

Berger’s excellent book has made an impression. But what if, through a cleverly conceived deception, Little Big Man was not a novel at all, but actual history? Did Berger pull off a historical hoax bigger than Frank Waters’s The Earp Brothers of Tombstone and Glenn Boyer’s I Married Wyatt Earp combined?

How Do You Know?

In retrospect, Berger may have given me clues to his chicanery all along. In 1998, in anticipation of the publication of The Return of Little Big Man, I interviewed him for the Village Voice.

When I asked him how Little Big Man came about, he responded: “I began Little Big Man in 1962, with the idea of bringing together all the great themes of the Old West that we, in the 20th century, looked back on as legendary. A year or two of daydreaming about it convinced me that this could only work if it was presented as the lifelong adventures of one person—a person who, because of circumstance, had come to know both the white and Indian side of the story.

“Gradually it came to me that a white man who had lived with the Indians sometime in the 1860s could have been at both the battles of the Washita Valley in 1868 and at the Little Big Horn in 1876. And I figured those two fights could stand in for all the other encounters between the U.S. Cavalry and the Plains Indians.

“In addition to Custer, a man could also have known Buffalo Bill Cody and might have become friends with him, and as you know if you’ve read both of the Little Big Man books, Jack Crabb had a long and fruitful association with Buffalo Bill.

“Wild Bill Hickok was universally regarded as the most iconic gunfighter, so having my character connect with him was a way of representing the whole gunfighter culture.”

Since many American Indians had vouched for Little Big Man’s authentic portrayal of Northern Cheyenne life, I asked Berger if he had visited the Little Big Horn battlefield and talked with descendants of the warriors who had fought in that battle.

He responded, “The truth is that I didn’t travel at all in the course of my research for Little Big Man. I never visited the battlefield while writing the book, and don’t believe I went there for the first time until, if I recall correctly, around 1966. I wanted to see the places that Jack had seen.

“I did see a good deal of the Great Plains. When I was a boy, I went with my folks on a car trip from Ohio to Nebraska. I saw my first Plains Indians, though I do not recall whether they were Sioux or Cheyenne or another tribe. The first time I saw them they were at a powwow, or at least that’s the word that was used to describe it to me. They were wearing buckskin and beads, which looked pretty authentic to me, but I was later told that Indians didn’t have beads and things like that until they began trading with white men.

“I’ve seen a lot of the West on many trips, but I never did it as research. I always thought I could take in much more if I was relaxed, not working. I know Mark Twain took extensive notes on his travels for his novels and nonfiction. But things always seemed fresher to me if I experienced them first and wrote down my recollections later.”

He did share with me some works he had consulted while working on his manuscript, most notably Dee Brown and Martin F. Schmitt’s Fighting Indians of the West and George Grinnell’s The Fighting Cheyennes.

After our interview, I mentioned to Berger that, at times, he had talked about Crabb as if he were a real person—“Jack Crabb had a long and fruitful association with Buffalo Bill” and “I wanted to see the places that Jack had seen.” He shot me a deadpan look, “How do you know he wasn’t?”

After reading The Return of Little Big Man, I sent Berger another note, asking him about his sources for Crabb having witnessed the 1881 street fight in Tombstone, Arizona, the death of Sitting Bull and other events. I told him other accounts of the “Tombstone Turmoil” differed from Crabb’s, including my own book Inventing Wyatt Earp, which I overnighted him. He replied, “Your superb and authoritative book was not available to me while I listened to Jack Crabb’s personal account of the O.K. fight, and therefore I was not able to counter his strong anti-Wyatt bias. Jack of course is a friend of Allie’s.”

“Listened to Jack Crabb’s personal account?” I asked Berger if he was joking, as I had been unable to find any reference to the real Crabb anywhere. He responded: “If like Ralph Fielding Snell you haven’t been able to find Jack Crabb’s name in any sources of Western history, maybe you just haven’t looked hard enough. Feel free to make this a lifelong quest!”

Now I was doubly flummoxed. Was Berger telling me that Snell, the “Man of Letters” who supposedly edited Crabb’s memoir, was also real? In Little Big Man, Snell “claimed” to have met Crabb in 1952, at a convalescent home, when Crabb called himself a “111-year-old survivor of the Little Big Horn.” This preposterous statement leads the reader to see Snell as a literary artifice intended to give the story credibility; I saw the middle name as an allusion to the English picaresque novelist and creator of the character Tom Jones, Henry Fielding.

Yet Snell cautioned, “I have never been able to decide on how much of Mr. Crabb’s story to believe. More than one night, I have wakened in the wee hours with the terrible suspicion that I have been hoaxed, have rushed to my desk, taken out the manuscript, and pored over it till morning.” He concluded Crabb was either the “most neglected hero in history or a liar of insane proportion.”

Late one night, I awakened in the wee hours with a terrible suspicion that we had all been hoaxed—by Berger. Crabb’s story seemed too historically authentic to be invented, particularly by a writer who admitted he had conducted relatively little research and who never saw most of Crabb’s West until after the book was published.

What if Snell was the fiction, created by Berger to disguise the fact that he had stumbled onto Crabb’s memoir? Or perhaps he had even come across the real Crabb himself, in 1952, when 28-year-old Berger worked as a college librarian.

I asked Berger if he could loan any materials that might prove that Crabb had existed. He sent me the article, “In Search of the Real Jack Crabb,” by the noted Custer historian Brian W. Dippie. I was thunderstruck. Someone out there shared my suspicion!

Berger then sent me “Thomas Berger’s Little Big Man as History,” by Leo E. Oliva, of Fort Hays Kansas State College. Oliva’s paper opened my eyes: “For the purpose of evaluation of Little Big Man as history, the following chronology is considered first to show that characters and events in the book are correct in relation to time.” The result, Oliva concluded, is “good history.”

Oliva’s chronology placed Crabb through every year of his life from 1852, when the 10 year old and his sister were captured by Cheyennes while traveling the Oregon Trail with their family, to 1876 and the Battle of the Little Big Horn, up to the subsequent death of Crabb’s Cheyenne grandfather, Old Lodge Skins.

With Berger’s death on July 13, 2014, I am left to wonder: will an examination of Berger’s papers verify Crabb’s existence, not just up to 1876, but also for all of the later events Crabb witnessed in The Return of Little Big Man?

Berger once cautioned me, “Not to make the Oliva article your life’s work.” “I suspect,” he wrote, “Jack’s account as being too close to Stuart Lake’s potboiler [Wyatt Earp: Frontier Marshal].”

As the 50th anniversary of Little Big Man loomed, I had asked Berger if he would allow me to reprint our communication on the subject. His e-mail reply on June 10, 2014, our last communication, proved him to be just as gracious as ever: “Please quote whatever you like from anything I’ve written public or private. For a while I assumed everyone had forgotten the 50th anniversary, but it turns out that Random House will publish a special reprint of the book in the autumn. Nothing has changed since we were last in touch, except that I’m now ninety and in a wheelchair, though my head apparently still functions. I hope you are well and productive.”

He fell ill and died less than six weeks later. In looking back over our communication, I wonder, did Berger, in his later years, feel a dollop of guilt for having taken Little Big Man from Crabb’s words and wanted someone to uncover his hoax? The truth of Little Big Man may never be known, but a careful study of The Return of Little Big Man may yet reveal some clues. After all, Berger did tell me, “Feel free to make this a lifelong quest!”

Allen Barra knew Tom Berger for about 15 of his 89 years and often exchanged letters and books with him. He is the author of Inventing Wyatt Earp and a contributing writer for The Wall Street Journal, TheAtlantic.com, The Daily Beast and American History magazine.