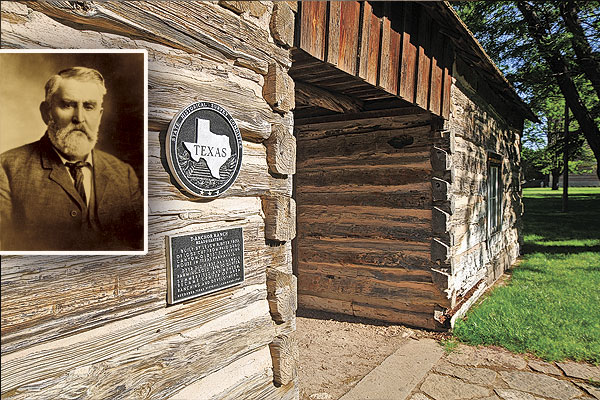 Charles Goodnight—the “Father of the Texas Panhandle”—was not a man who took no for an answer.

In 1877, when he ordered his brothers-in-law to build a log cabin to headquarter the massive T Anchor Ranch, the 15 year old and the 28 year old did as they were told—even though Goodnight wanted the structure built on a treeless plain five miles from the nearest source of wood.

“It had to take forever,” says “Cowboy Mike” Grauer of the Panhandle-Plains Historical Museum in Canyon, Texas. “They had to cut and haul all those cedar and juniper logs, but they built a dogtrot cabin that remains today one of the oldest ranch buildings in Texas.”

A dogtrot is two cabins connected by a breezeway, all under a common roof. The one in Spring Draw that Leigh and Walter Dyer built for their sister’s husband housed ranch hands on one side and offices on the other. Without glass for windows and only packed dirt for the floor, Walter deemed the cabin “good enough for anybody.”

Today, it’s good enough to teach a new generation about cowboy life in the 19th century and how big ranching got in Texas. In 1927, West Texas State Teachers College (today’s West Texas A&M) bought a piece of the ranch—it once spread over six counties and covered more than a million acres—and turned the dogtrot headquarters into an agriculture “dorm.” In 1975, the cabin was taken apart, log by log, and moved to the east lawn of the college’s Panhandle-Plains Historical Museum, where it sits to this day.

Good timing, Grauer says, because a year later, “there was a massive flood where the cabin used to stand. If we hadn’t moved it, it would have been destroyed.”

Even though the cabin was safe and sound on campus, Grauer says basic neglect saw the building slowly succumb to the elements. In 2013, the building got a much-needed face-lift.

“We redid the roof, replaced rotten timber, tore out the wooden floor that was an attempt at ‘modernizing’ and replaced it with a packed-dirt floor like it originally had,” he says. “We tore off extra rooms that had been added over the years, and so now it’s just like it was when it was built. You walk in, and it’s like you’re stepping back in time.”

Grauer should know. While he’s officially the associate director and curator of art and Western heritage, most know him as “Cowboy Mike.” Wearing an 1880s outfit, he’s the voice of the museum’s living history cowboy program. He takes children and adults through the building, telling them stories about frontier cowboy life and how important the T Anchor Ranch was to the history of Texas.

“We cannot keep up with the demand,” says Grauer, who notes that, in 2012, on a single day, 3,500 students from as far south as Florida and as far north as Michigan learned about cowboys while touring this historic building.

Given his acclaim as the best-known rancher in Texas, Goodnight would be happy his cabin shares this slice of history.