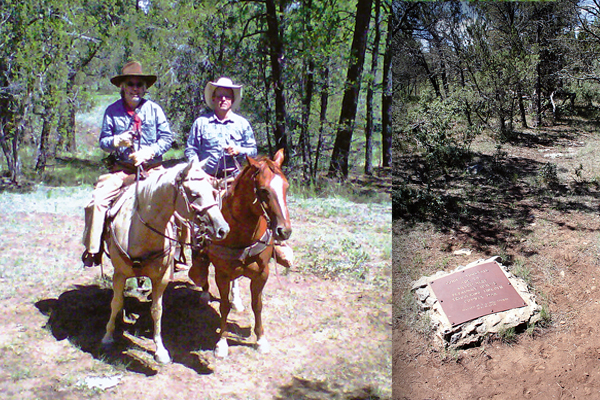 Dutch Oven Wally Roberts is trying to kill me.

If there’s a cowboy event or trail ride in West Texas or New Mexico, chances are you’ll find Roberts “preserving history and the Western lifestyle.”

Roberts is not just a mighty fine cook; he’s the owner of Outlaws & Renegades, which caters events from rodeos to weddings and puts on equine adventures for folks who love Old West history and hard riding.

Roberts organizes the annual Billy the Kid’s Last Ride from Fort Sumner, New Mexico, to Lincoln each spring, and he invited me to tag along for a fall ride he is creating. This one starts at John Tunstall’s dugout on the Felix Canyon Ranch in southern New Mexico, hits Tunstall’s murder site near Glencoe and rides into Lincoln. I participate in the “preride,” to make sure this event is workable for Outlaws & Renegades.

I must have blocked out the last time I went on a ride with Roberts. That Billy the Kid’s Last Ride almost became Johnny D. Boggs’s Last Ride when a horse named Chuck chucked me off at a high lope.

This time around, Roberts has me on a five-year-old palomino mare—his college-age daughter’s horse—that he swears “has never gotten any rider in trouble.”

I ride her around the first evening, and she’s a honey of a horse. I see no problem the next morning when we take off for the Tunstall murder site.

On February 18, 1878, Tunstall and a handful of riders (one being Billy the Kid) were driving horses to Lincoln when a sheriff’s posse overtook them. Instead of arresting Tunstall, they shot him dead, triggering the Lincoln County War.

To reach the site, we trailer the horses up the National Forest road, about 25 miles east of Ruidoso via U.S. 70. The plan is for Felix Canyon Ranch foreman Chris Mauldin, Roberts and I to set out for the murder site, then Roberts will head back and pick us up at the bottom of the canyon.

I swing into the saddle. Hell Bitch starts bucking.

I stay with her for three jumps (no lie). Then she falls. Since having a horse roll over on me doesn’t sound appealing, I kick free of the stirrups to bail. I end up landing on my camera. After stumbling out of Hell Bitch’s path, I decide to lay there for…like…forever.

Eventually, I’m back in the saddle. We ride to Tunstall’s murder site. Afterward, Mauldin and I descend into the abyss. My ribs start aching. The trail disappears. We keep going. My ribs start pounding.

We follow a rocky, dry watershed down the canyon, ducking under low branches, trying to find our way back to Roberts. My ribs scream. If I dismount, I am not going to be able to get back on, and these trails we’re blazing are not rib-friendly.

About 90 minutes later, we hear Roberts’s voice. Cavalry to the rescue. We’ve picked up the trail again. Roberts now has a new ride for Outlaws & Renegades, and soon we’re heading to the Ruidoso ER.

Doc’s verdict: “Two fractured ribs. Stay off horses for a while.”

My verdict: Roberts is trying to kill me.

Oh, yeah. That mare is no longer named Hell Bitch. I renamed her when I landed on my camera. Her name’s Honey.

Which gives Roberts a recipe for his next cookbook: Honey-roasted ribs. That is, if I don’t kill Roberts first.

Johnny D. Boggs’s wife keeps hinting to him that maybe he should stay off horses … like … forever.

The ribs weren’t hurting too badly after my wreck, when Wally Roberts snapped this shot of me (at left) and Chris Mauldin.