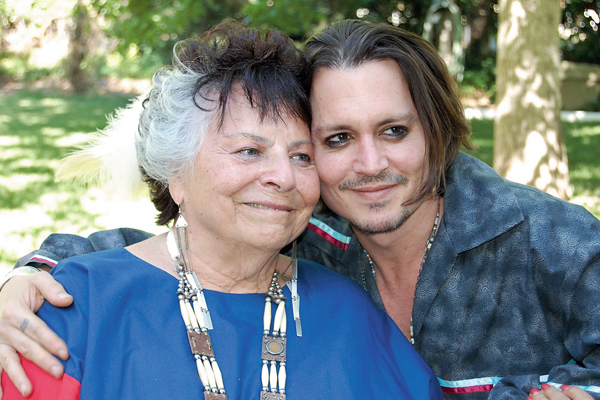 The first time LaDonna Harris got involved in a civil rights issue, she was not fighting on behalf of her Comanche people, but for her black babysitter.

In the early 1960s, in Lawton, Oklahoma, “our babysitter was picketing the local theater because African-Americans had to sit in the balcony,” she recalls.

While LaDonna and her neighbors organized potluck dinners for the protestors, she had an epiphany: “Here I was working for integration for blacks, but what was I doing for my own community?”

The Oklahoma group’s first focus was on tribal youth, which had a 75 percent high school dropout rate in the early 1960s. “We found that talking to each other can have an amazing impact and can change the system,” says LaDonna, who proudly notes that within five years, the dropout rate in some areas had decreased to 30 percent.

She traveled to Washington, D.C. with her husband, Fred, elected to the U.S. Senate in 1964, and in that arena, she learned how national politics worked. Fred sponsored the bill to return 48,000 acres to the Taos Pueblo of New Mexico—mountain land and Blue Lake,  taken from them by the Teddy Roosevelt administration. LaDonna personally went to the White House to lobby President Nixon to return the land.

She also worked alongside her husband in getting the Menominee Tribe of Wisconsin reinstated as a tribe. She worked with Alaskan tribes when oil was discovered on their land. Then tribes with timber rights turned to LaDonna’s group for help.

“We had tribes with all these resources, so why were we so poor?” she wondered.

A look at the Department of Interior lease agreements showed they did not favor the tribes. For decades, LaDonna has worked to change that disparity.

But ask her to brag about Americans for Indian Opportunities, and she will tell you about the 200 young American Indian “ambassadors” whom she sees as tomorrow’s leaders. Their exposure to issues at the local, national and international level help prepare them for adult challenges.

The newest cause that has captured the attention of this 81-year-old dynamo is globalization. “I want the indigenous view and our values to be incorporated into global discussions,” she says.

She is also a new mother.

In May 2012, in her backyard in Albuquerque, New Mexico, she adopted actor Johnny Depp into her family. The Comanche Tribe then made him an honorary member. “He’s my son now,” she says with pride.

Depp will star as Tonto in the movie The Lone Ranger coming out this year.

LaDonna says she’s not worried about Depp’s portrayal, which will be as a Comanche (not a Potawatomi, as Tonto was in the original broadcasts). “We made him a Comanche so he’d act like one,” she says with a laugh. “I am so happy with my new son; he’s lived up to more than I ever expected.”

So America and the world may know LaDonna Harris as a remarkable civil rights leader, but Johnny Depp knows her as “Mama.”