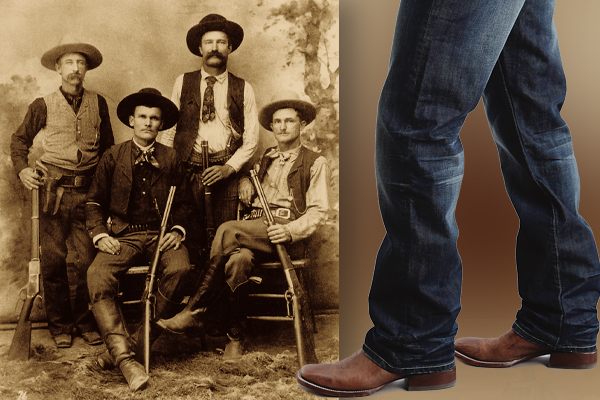 During the Canadian River Campaign of 1858, Texas Ranger Capt. John “Rip” Ford wore his striped trousers tucked into heavy-top boots. In the most widely-circulated Texas Ranger photo in history, Company D Rangers posed with their tucked-in boots while on assignment to protect a silver mine in 1890.

Along with the Texas Rangers, frontier cowboys, farmers, miners and soldiers tucked their pants into their boots—known in the military as “blousing”—for several practical reasons.

For starters, britches tucked into boot tops kept the bottoms of legs free of debris, such as mud, muck and manure. The fabric was also prone to collecting burrs, cactus spines and the like. These could all be easily brushed from the tanned, relatively impervious leather of boot tops, or they didn’t stick at all.

Packing the pants into boot tops also reduced the chance of a pant leg getting caught on a branch and snagging a horseman’s leg in a potentially injurious or even deadly entanglement. Alternately, chaps and other leather leggings were often worn to ward off malevolent vegetation.

The practice also prevented insects and snakes from climbing up inside the pants. This was particularly important for someone sleeping in the open. Men slept in their boots not only so they could spring to action, but also to thwart critters from nesting in their nethers.

The act could also be a signal. Blousing one leg and not the other apparently indicated the wearer’s employability, or his interest in buying or selling cattle.

In modern times, pants tucked into boot tops can signify the wearer’s regional roots. West Texas cowboys and Great Basin buckaroos tend to display their higher boot tops outside their pants. Not coincidentally, these taller boot shafts are often colorful and lavishly decorated with stitching and cutouts. In some cases, though, exposed boot tops are just a fashion statement by their proud stuffed-jeans owner.

By the early 1900s, denim trousers were becoming the signature attire of working men throughout America. Fashion trends changed among boot wearers, and boot tops began disappearing under pant legs.

After WWII, work pants became more specialized. Wrangler was introduced in 1947 as denim trousers designed expressly for cowboys. The original 11MWZ “Cowboy Cut” jeans were tapered from the knee to the cuff. This cut “allowed the wearer to wear his jeans outside the boot or tucked in,” stated the Wrangler literature, which added, “It was snug enough to prevent the upper boot from being scratched while riding through brush.” Suddenly the pant leg was protecting the boot top.

The tighter fit of today’s boot cut jeans also accommodate “stacking” of the bottom of the leg. Boot cut jeans are cut longer than regular jeans, so the back hem rides at the top of the heel while the wearer is in the saddle. When the wearer stands, the extra fabric “stacks up” above the hem, which is too tight to slide down over the heel. Because of this design innovation, you don’t have to tuck your pants into boot tops if you don’t want to.

Like tucked-in pants were during the Old West era, stacked jeans today are the signature of an authentic cowboy or cowgirl. Any pant legs that rise up the shaft of a boot are derided as “high-water” pants.

But don’t say that to a Texas Ranger.