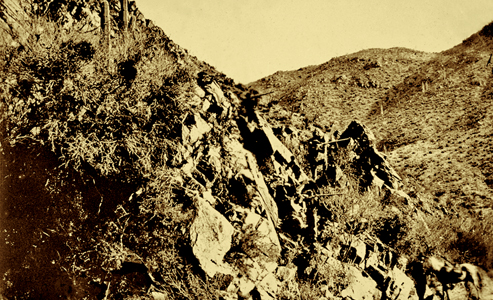 On the morning of June 1, 1864, a group of 100 volunteers gathered at King Woolsey’s fortified ranch house to form a raiding party to pursue Apaches in Tonto Basin. The Apaches had been harassing the isolated settlements of Big Bug, Lynx Creek and Agua Fria (present-day Humboldt) ever since Joseph Rutherford Walker and his party had first ventured into the area the prior summer.

Most of the men lived in the recently-established Arizona territorial capital of Prescott, within the defensive range of Fort Whipple. These prospectors, merchants, farmers and laborers had been attracted to the harsh environment of central Arizona after hearing of the Walker Party’s gold discovery along Lynx Creek.

William Porter Jones was among those original settlers. His partners were joining the Woolsey party for the raid, yet Jones planned on returning to the Big Bug diggings. The Big Bug mining camp, organized in 1862 by John and Theodore Boggs, sons of former Missouri Gov. Lilburn Boggs, offered the potential of rich placer mining claims.

After his overnight stay at the Woolsey ranch house, Jones looked forward to a peaceful ride along the Agua Fria River on his return ride to Big Bug (near present-day Poland Junction). Within the next 24 hours, the 27-year-old prospector from Missouri would leave his unique mark on Arizona history.

About four miles from the Woolsey Ranch, 30 to 40 Apache braves, concealed by the terrain of a narrow Agua Fria River canyon, ambushed Jones. Then they tortured and murdered him. A search party found Jones’s body two days later and buried him at the ambush site. His untimely and violent death likely contributed to the intensity of violent conflict between the early settlers and the Apaches. A few years later, in 1870, The Arizona Miner remembered how
the Indians had “shockingly mutilated [Jones’s] body.”

These letters are the only thread to connect us to “Uncle Will’s” travels out West. He began his 2,000-mile journey in 1858 when he left his hometown in southwest Missouri and headed to the mining camps of Colorado, California, Nevada and Arizona. During his six years of prospecting for gold, he witnessed the gold rush of Pike’s Peak, the boom years in California’s Grass Valley, the establishment of Aurora, Nevada, and the formation of the Arizona Territory in the mining camps of Prescott, Lynx Creek and Big Bug Creek.

Even more, the letters portray an optimistic and loving son who struggled to overcome the financial, emotional and physical hardships associated with the life of a prospector. He never lost his optimism, sense of humor or concern for the well-being of his family during his six-year stint as a gold prospector.

In his final letter to his parents, dated January 24, 1864, and postmarked, “Has-sa-amps, Walker’s Diggins,” Jones wrote, “You will think that I am almost out of civilization and so I am.”

For the benefit of his parents, he may have understated the severity of the conflict with the Indians: “The Indians are yet very troublesome stealing horses but I have kept mine.”

Joseph Lennon, a prospecting partner, painted a starker picture of the conflict in another letter: “Out of a party of who started from Aurora [Nevada] of fourteen men I am the only one alive today.  They were all killed by the Indians.”

Yet Jones comforted his family with hopeful letters such as one describing the psychology of the gold prospector: “We are satisfied that we are near our fortunes but we may be too sanguine but we have every evidence of it. Our mines are paying us well now but we can’t be content while we believe there is such a rich country ahead. We shall probably start from here in 30 days that if our digging does not prove very rich here.”

Cognizant of the increased risk of hostile Indian attacks that came with his digging for rich placer at Big Bug, he later added, “Our principal study is how to manage the Indians and take out gold.”

Two years after Jones’s death, the battles between settlers and Apaches had died down enough to allow settlers to rebury Jones’s body at Aztlan Masonic Cemetery. That November, J.T. Alsap, treasurer of the Arizona Territory and friend to Jones, wrote to Jones’s father to share the impact of the prospector’s death on the local population: “It created a profound sensation here at the time as he was among the first victims of savage cruelty in this part of the country and it was one of the causes of the unrelenting hostility of the people of this part of the country to the Indians…. It is war to the death whenever citizens & Indians meet.”

Robert T. Gibney, of Phoenix Arizona, was so inspired by the letters written by William Porter Jones that he wrote the song, “A Miner’s Letter Home.”