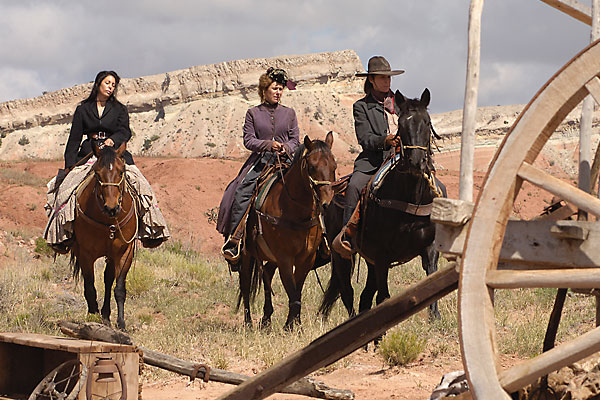 Throw in one eclectic filmmaker (Tom Shell), a director who helped give Twin Peaks its creepy edge (Tim Hunter) and an Edgar Award-winning mystery writer as tough as Sam Spade (James Crumley), and you can bet The Far Side of Jericho is one quirky Western.

This team doesn’t quite conjure up images of Rio Bravo, For a Few Dollars More or Winchester ’73.

Take Shell, for instance. After finishing shooting The Far Side of Jericho in early June 2005, Shell directed a low-budget vampire flick before producing a gay-themed art film in British Columbia. And Hunter? His past directing jobs include 1986’s River’s Edge with Keanu Reeves and 1993’s The Saint of Fort Washington with Matt Dillon, as well as episodes of the freakish Carnivàle. (He did land a directing job on HBO’s Deadwood late last year.) And Crumley? Well, he intimidates us too much to even attempt a joke.

Yet The Far Side of Jericho, now making its way through film festival circuits before Shell hopes to release it into the distribution market, turns out to be a labor of Western love.

“Frankly, I love the Western genre,” says the 43-year-old Shell, who had directed an 1850s-era Native American movie, 1998’s Wind River, starring A. Martinez and Russell Means. “I grew up with a father who was a John Wayne addict, so I was nursed on old Westerns, and he was a Clint Eastwood fan as well. I don’t think he quite knew who Sergio Leone was, but he had some of those movies, so I was always around those things.”

Approached by executive producers, script in hand and gung-ho to make a Western, Shell saddled up and contacted Hunter. “Tim hated the script, but he was a huge, huge Western fan and had such a great knowledge of [the genre], he was very excited to try to pursue this a little further,” Shell says.

Thus, Hunter took off to Missoula, Montana, to cajole the often-cantankerous Crumley into revising the script. Crumley, whose novels include The Last Good Kiss and Bordersnakes, and Hunter cranked out a couple of drafts, and about six months later, The Far Side of Jericho was being shot in New Mexico, taking advantage of the state’s filmmaking incentives.

Set in the 1880s, the film opens with the capture and lynching of the Thornton brothers after a bungled bank robbery and killing. The Thornton wives— tough Maxine (Suzanne Andrews), reformed hooker (Lissa Negrin) and former schoolteacher-turned-drunk (Judith Burnett)—are suspected of knowing where their husbands hid the loot. Pretty soon, they’re on the run from the corrupt preacher (James Gammon) and his gang—and just about everybody else. And pretty soon, the women realize they have to find the money to save themselves.

“It’s a quirky road-chase movie as well, where the husbands’ ghosts actually visit the women a couple different times,” Shell says. “It takes on areas that aren’t necessarily totally traditional, but I think we’ve got a nice mix of traditional, even a homage to various filmmakers. We’ve got a big chase scene that we’ve always called ‘The John Ford Chase Scene.’”

Criticism surrounding more recent movies has been that filmmakers have forgotten how to make Westerns. One need look no further than American Outlaws, Texas Rangers or even The Missing to find truth in that statement. But Shell says striking the right balance between Ford and today’s filmgoing MTV generation is tricky. “You go back to the Budd Boetticher looks and style, and even with John Ford, you’ve got to be careful because it might not totally be accepted by audiences these days,” Shell says. “They are a little more savvy.”

“It’s shot in a fairly traditional Western style,” Shell says. “Tim Hunter wanted to do a lot of big vista shots, sweeping stuff. He’s not real tricky with the cut. He’s a traditionalist when it comes to this. He didn’t want to make this Young Guns, even though there were a few times on the set I was calling it ‘Old Guns,’ not from the look of the people, just from the amount of people we had on the set that were in their 50s getting back problems. I think I carried a masseuse with us during the entire production. I was probably the youngest guy on the set.”