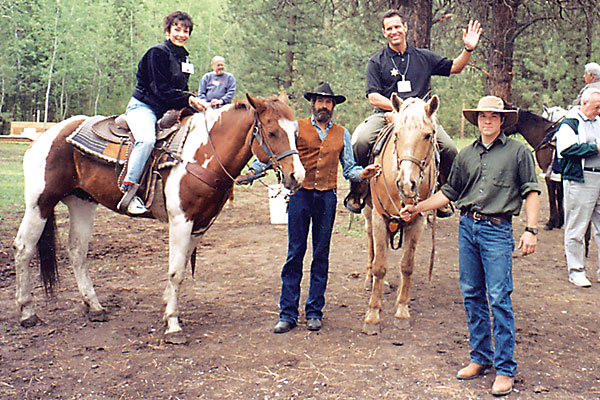 Every time Sharron and Hal Butler visited their future ranch site in Kalispell, Montana, a solitary dove was always lingering around in the backyard.

When the Butlers finalized the purchase, Sharron knew the dove was a sign from heaven, so she wrote to the lawyers for the Lonesome Dove series and received written permission to use the name for the guest ranch.

Sharron is often resourceful like that. As Hal says about his wife, “I don’t think she has ever admitted there are only 24 hours in a day.”

The two got married four months before Hal retired from law enforcement in 1990, and groom and bride hitched their stars to starting up guest ranches. Their first enterprise was a 600-acre guest ranch, followed by a 400-acre ranch in Whitefish, Montana. In June 1998, they opened up Lonesome Dove Guest Ranch in Kalispell, specializing in trail rides, riding lessons, deep-pit barbeques and, of course, offering bed and breakfast accommodations. Concerts performed by local entertainers, such as Joni Harms and Brenn Hill, are offered during the summer; in the winter, guests can ride in sleighs pulled by Hal’s champion Belgian Paint draft team.

Hal and Sharron both share a huge love for horses. Hal has his Belgian Paints; Sharron, her wild Mustangs. At the ranch, Sharron hosts a rescue service for abused or abandoned horses; she also offers veterinary intern-ships for three universities.

Hal admits, every once in awhile, Sharron turns to him with a sly smile and asks, “Do you think the food company will ever go?”

I don’t know about you, but if I ever get the chance to attend the deep-pit barbeque at the ranch, I’ll be asking for some of that dry rub spice myself.