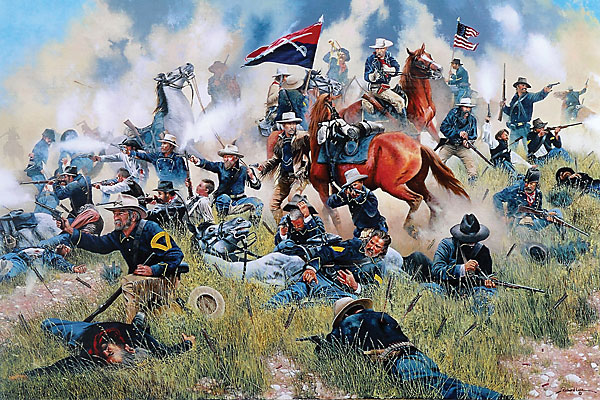 Firing his pistol, he makes a mad dash to run through the Lakota warriors. One warrior rushes forward and tomahawks the soldier to the ground. Shouting a cry of triumph, the warrior bends over the prostrate soldier, grabs his hair and places his knife to begin scalping. It grows quiet, except for clicking sounds.

Jay Red Hawk, the Lakota warrior, stands up, reaches his hand down to me and pulls me to my feet.

I tell him “I’m gettin’ too old for this,” but I don’t really mean it.

One weekend each August, Grant and Jo Dee Shearer’s 20,000-acre ranch near Wall, South Dakota, becomes a journey back into the Old West. Cowboy, Indian, Mountain Man, military and pioneer models rendezvous at the Artist Ride where approximately 50 artists set up the scenes and models to fit their vision of the West. Like Frederic Remington, who utilized his cameras and sketch pads to create his masterpieces (see p. 30), these artists also take reference photographs to help them create their Western art.

The picturesque Shearer ranch, featuring steep bluffs rising above gnarled old cottonwood trees alongside the Cheyenne River, is a working cattle ranch that includes longhorns and horses. Little has changed in this part of the country during the last hundred years.

The Artist Ride began in 1984, evolving over the years so much that the event organizers limit it to about 50 artists and 80 models. Lavon Shearer, Grant’s father, was one of the pioneers of the Artist Ride.

“It all started when a few of us took a little wagon ride with a few riders and cowboys down in the Badlands one weekend,” Lavon says. “The artists, Dan and Cat Deuter, went along. Of course, they took lots of pictures. Dan and Cat said ‘Lavon we need to do this again next year. We got good pictures.’ So, the next year we did it again with a few more people and artists. They all said ‘Boy, this is really nice. Let’s do it again.’ Then we started to hold it along the Cheyenne River on our ranch.”

When these shutterbugs create a painting of the Old West, they strive for accuracy. That’s where Jim Hatzell comes in. He contacts the artists and asks for their wish lists of models and scenes. Then he does his best to fulfill on them. One year, Hatzell says, “an artist asked me to find a Model-T car that the artist could change into a chuckwagon. We got it for him.”  Another time, an artist wanted Pancho Villa-esque Mexicans and the 1916 U.S. Cavalry. If Hatzell isn’t told the requests in advance, the models won’t know what gear to bring with them.

The best part about the Artist Ride is the cooperative community it fosters. “The Ride is like an artist co-op,”?Hatzell says. “If you need a stagecoach, we’ll get a stagecoach and then pass the hat to pay for it.”

The artists and models get along so well that after the shots for the day have been captured, they settle down together for hearty meals such as pork chop suppers with beans and baked potatoes. Some folks bide their time at the Dead Horse Saloon. A stone’s throw away, a large bonfire usually blazes. Old cottonwood tree trunks surrounding the fire make good seats as folks discuss the day’s scenes and make plans for the next day. Father and son ranchers from downriver often
sit on logs, strumming their guitars and singing cowboy songs. “I’ll play anything
but ‘Leaving Cheyenne,’” one father may say. Of course, someone inevitably shouts out, “Play ‘Leaving Cheyenne!’” The backdrop of flames silhouette several couples dancing.

A breeze may blow in, cooling the hot August night as a full moon rises over a ridge where coyotes begin to howl—the perfect ending for a day at the Artist Ride.