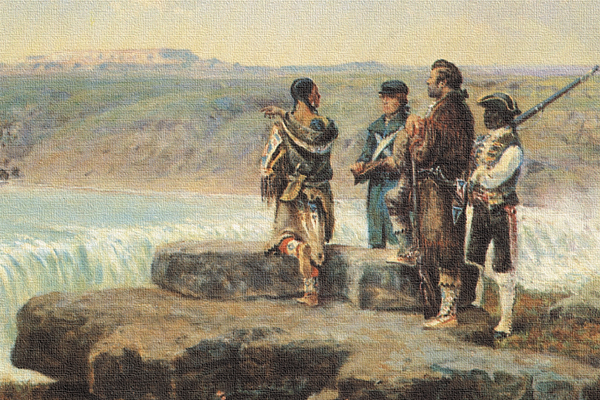 In the year of Thomas Jefferson’s famous purchase, 1803, Napoleon Bonaparte had conquered Spain and ruled all Spanish territory in North America.

Jefferson’s union of 17 tiny states was a small blip on Napoleon’s map of the western hemisphere. It was surrounded by English Canada and now French—formerly Spanish—Louisiana, Texas and California.

When Napoleon sold Louisiana, he sold a small portion of his assets to the infant union of scrappy states that is our country today. English traders had moved south from Canada into present-day Iowa. Texas extended north to the Arkansas River. California extended east to the Continental Divide. Louisiana was a swath of land much smaller than what we usually see on modern maps. We owe its present size to the Lewis and Clark Expedition.

Louisiana’s sale to the U.S. buffered English Canada from the French Texas and California. The sale gained needed funds for Napoleon’s European wars, but it’s very likely that the crafty future emperor had every intention of someday seizing back French-speaking Louisiana.

The territory of Louisiana had never been explored. No one knew the location of its boundaries or what lay in its interior. All believed that the Missouri River that traversed it, headed directly west and held the key to the coveted Northwest Passage and its rich trade in furs. The expeditions of Mackay and Evans, Alexander MacKenzie and others had searched and not found the passage. Thomas Jefferson searched again. He believed firmly in securing the land and its valuables for the United States. And Jefferson had the diplomatic genius to disguise his economic aims in the cloak of scientific discovery.

When Captains Meriwether Lewis and William Clark set out for the Pacific Ocean, they headed over the Continental Divide into territory claimed by Spain, Britain or Russia. Doggedly, they followed the Missouri River to its source and beyond. The momentous voyage added the Missouri, Columbia, Snake and Clearwater drainages to Jefferson’s infant republic. Today this includes the states of Minnesota, North and South Dakota, Montana, Idaho, Oregon and Washington. And if we consider that William’s older brother by 20 years, George Rogers Clark, seized the states of Ohio, Indiana, Illinois, Wisconsin and Michigan from the British during the Revolutionary War, then we owe probably about a third of present U.S. territory to the Clark brothers.

The Lewis and Clark Expedition was blessed with amazing good fortune. From May 13, 1804, to September 23, 1806, only one man died: Charles Floyd of what was probably appendicitis. Only once did the Corps of Discovery, a U.S. Army unit of men who had fought Indians in Kentucky and elsewhere, come to blows with the natives: eight Blackfeet. The Sioux wanted greater tribute, the Crow stole horses, but the two captains and three sergeants managed to restrain the combative instincts of their impulsive young men. The Mandan, Shoshoni, Flathead and Nez Percé went out of their way to help the expedition with shelter, horses, food and nursing care. The Nez Percé saved the corps from starvation after a grueling mountain passage when the men of the corps ate the wax of their candles to stay alive. Again, on the way back, it was the Nez Percé whose guides and horses facilitated an easy and timely mountain crossing.

The expedition met with a bewildering array of obstacles: huge mountains; prairies wider than anyone imagined; stinging insects and angry bears; whirlpools and rapids; sickness, injury and west of the divide light-fingered, flat-faced people who existed on fish, dogs and roots, like no other Indians any of them had ever known. The group split up and regrouped several times and found each other in the middle of untracked wilderness. Supplies of whiskey, tobacco, corn and dried soup ran out, but not the blackpowder and lead needed to hunt and not the kettles and axes needed to cook and eat. Every man in the corps polished and cleaned his rifle regularly. Every man chopped wood, dug out canoes and sewed hides for clothing. At least four men besides Lewis and Clark wrote a journal. On the Pacific shore, they searched for a re-supply ship that had disembarked before they arrived.

We forget that Lewis and Clark were not alone. In the face of great hardship, 30 men, one slave and one woman with a baby soldiered on, survived and returned. One was nearly blind. Many could not read or write. Together, they extended U.S. territorial claims to the coast of the Pacific. Most of their names are not recorded in the history books, but our country is greater because of them.

Rita Cleary is the president of the Western Writers of America and author of Charbonneau’s Gold and the upcoming Lewis and Clark story Calling the Wind.