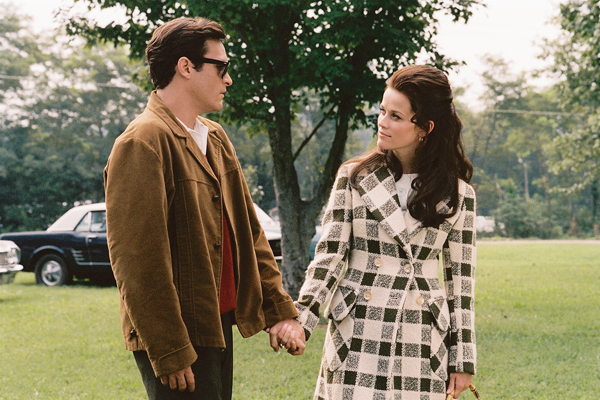 When watching a movie, sometimes it’s easy to forget that those are real people behind the roles.

They bring to their characters their own embittered struggles and feelings of inadequacies, but ultimately, something inside reminds them of their strengths and pushes them to walk the line. Perhaps an Academy Award nomination triggers it.

For anyone, attempting to portray the legendary Man in Black is a difficult endeavor, but it would prove especially hard for 30-year-old Joaquin Phoenix, no matter how honored he was by the invitation.

He had first met his idol Johnny Cash four years earlier, when Johnny confessed himself a fan of the film that almost earned Joaquin a gold statuette: Gladiator. Joaquin says he was shocked when Johnny started quoting his dialogue. The legendary singer told him “I really loved the part where you said, ‘Your son squealed like a girl when they nailed him to the cross.’”

Years later, Joaquin was surprised to hear he had been chosen to play the rebel. That’s when his feelings of inadequacies began to show. “My singing is shameful. For Walk the Line, I think we put in probably three-and-a-half months prepping for that film and I’ve never felt so inadequate in my life.”

But if anyone asks him if he measures up to Johnny, who’s five feet taller, he stoutly defends himself: “I can get into the man’s heart and soul, and I hope that will make people forget about resemblances.”

How does a man raised by Children of God missionaries, essentially a gypsy until his parents left the flower-power sect when he was five and moved to Los Angeles, get into the “heart and soul” of a man who was a six-year-old cotton picker in Arkansas, then an adult singing sensation at Memphis’ Sun Records with his number one hit “I Walk the Line,” only to be a drug and booze addict as a Nashville superstar in the 1960s?

Pain would be the connector.

While filming the scene when Johnny’s younger brother Jack dies in a table saw accident, Joaquin suffered a breakdown. The scene had sparked memories of his older brother River’s death.

Joaquin had been close to River, who appeared in Stand By Me and My Own Private Idaho. River’s first role was Guthrie in the CBS series Seven Brides for Seven Brothers. Joaquin and his siblings often played on the set, and he recalls the day he got his own cameo appearance. “We were supposed to cry because someone was fighting. River started crying right away and it made me cry. It felt so real. It was a shocking revelation. So I was kind of hooked after that.”

Those days seemed light years away one Halloween night in 1993 when 19-year-old Joaquin held his 23-year-old brother, who overdosed on drugs outside the Los Angeles nightclub the Viper Room. Joaquin’s 911 call was heard across the nation.

But even when the filming was done, Joaquin felt the reparations of portraying a man who had dealt with some of the same demons he still struggled with. Namely, alcoholism. Maybe Johnny’s favorite scripture verse, Romans 8:13, had finally spoken to him: “For if you live according to the sinful nature, you will die; but if by the Spirit you put to death the misdeeds of the body, you will live.” Maybe it was hearing of the pain that Johnny had felt coursing through his body those last years of his life.

Whatever it was, only months after filming, in April 2005, Joaquin had checked himself into rehab to confront his alcoholism. “He was uncomfortable with the way he was living with his life,” his spokesperson Susan Patricola says, “and found the courage to deal with the disease.”

Courage to live with yesterday

Johnny found his courage when he met June Carter. When he wrote “I Walk the Line” while backstage in 1956 in Gladewater, Texas, he admitted it was for June: “I was newly married at the time, and I suppose I was laying out my pledge of devotion.”

The $28-million biopic portrays his road to June, starting with his cotton picking days in the late 1930s and taking us through his love affair with her.

“I didn’t want to take a whole life and squeeze it into two hours,” Director and Cowriter James Mangold says. “I thought the thing to explore was using John as a window into the birth of rock and roll, and into one of the great true-life romances of the last century.”

Reese Witherspoon, who had once played June’s mother in a fourth-grade play, “would’ve walked on my hands and knees halfway to Memphis to play June Carter Cash.” She admits, “I’m always looking for characters that portray a real or realistic struggle of a woman.”

When June was falling in love with Johnny, both had been married to other people. Johnny was also dealing with a drug addiction, and June would be the one who helped him through the struggle.

“They were two people just meant to be together and work side-by-side for 12 years before they ever were able to express their love for each other,” Reese says. “It was hard and tumultuous, but that’s what love is. I just think there’s something really beautiful and real about that.”

John Carter Cash, who consulted on the biopic, paid Reese the ultimate compliment: “She’s doing an excellent job as my mother.”

His sister Kathy shared their father’s feelings about the film. “Dad’s vision was failing [from autonomic neuropathy] so he listened to the whole script on CD. He crossed out a few things he didn’t like but gave a lot of input on the script and was very proud of what they’re going to do.”

Shooter Jennings, who got to know Johnny’s kids when his father Waylon toured with Johnny and the other Highwaymen, plays his father in the film. (Incidentally, Waylon also sang a song with “walk the line” in it: Red Lane’s “Only Daddy that’ll Walk the Line.”)

Shelby Lynne plays Johnny Cash’s mother Carrie. Johnny once said of Carrie, “My mother told me to keep on singing, and that kept me working through the cotton fields. She said, ‘God has His hand on you. You’ll be singing for the world someday.’”

Joaquin and Reese will sing for the world this November.