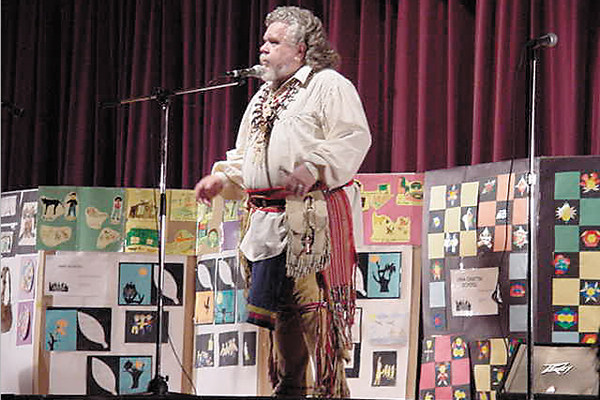 “I make the world’s greatest museum thief … and they know about it!”

If you can’t tell already, Jack Smith is an avid historical craftsman, to the point that he steals from the best. He’s often taking pictures of original pieces, so he can note their construction. He’s one thief that museum officials don’t mind, as many of them kindly allow him to measure and examine the items, so he can reproduce them for his Medicine River Trading Company in Valier, Montana, near Glacier National Park.

Being a quarter-Comanche, with roots tracing back to Quanah Parker, Jack was introduced to his Indian heritage through his grandmother. She began teaching him beading and other native handcrafts when he was eight. Ever since, he has continued to trace authentic reproductions of American Indian and European products.

A researcher at heart, Jack had high hopes of becoming an American History teacher, supporting himself through college by acting. But his marriage and the birth of the first of his four children pushed him toward a career in broadcasting.

During his 34 years in the field, he also lectured—and continues to do so—on Toussaint  Charbonneau (he disagrees with Meriwether Lewis that Charbonneau was “A man of little value”). Jack initiated a bill to honor Jedediah Smith, which the California Legislature passed, resulting in the state’s Jedediah Smith day. And his artisan knowledge also earned him work as a technical advisor for Jeremiah Johnson, starring Robert Redford, and The Mountain Men, starring Brian Keith and Charlton Heston. Jack retired from broadcasting to open his trading company, which has been operating online for over 15 years (www.medicineriver.com), and he just opened a 1,900-square foot store in Valier.

Jack’s love of authentic reproductions led him to offer Old North Trail beads, which match those traded from 1700-1900. (His bead wares even include a collection that was shipped into San Francisco in the 1890s.) Custom, one-of-a-kind clothing is offered for the discerning re-enactor and collector. Handmade soaps, Hutterite wedding needlepoint samplers, trade blankets, tinware and more truly make this a one-stop trading store. Nothing makes this museum thief happier, the 61 year old says, than re-creating history to share with others.