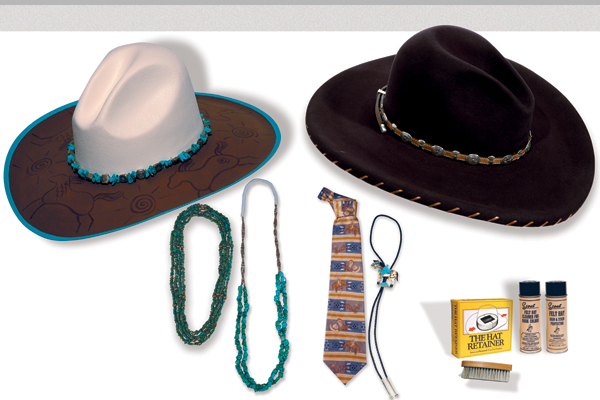 The hat style called the Tom Mix goes in and out of fashion, but it has been guaranteed to raise a smile for most of the last century.

The Tom Mix hat, with its center crease and side pinches, is easy to spot today because so many cowboys and Westerners wear it. In some circles, it’s known as the Gus, in honor of Robert Duvall’s character in the TV miniseries Lonesome Dove.

Manny Gammage of Texas Hatters made the original Gus hat worn by Robert Duvall. Gammage describes it as having a “sloped crown and cowboy curled brim” with a rawhide twist band that was made especially for the character of Gus McCrae. His version of the Tom Mix hat also has a sloped crown, but the crease appears to be more pinched. So what’s the deal here?

“One thing you’ve got to remember is that the Gus hat was made on a six-inch crown, while the Tom Mix is made on a seven-inch or taller crown,” says custom hatmaker Tom Hirt of Penrose, Colorado. “The indentation is not as severe because the crown is lower. So it appears similar, but it ain’t the same hat.”

That crease “originally came off the west Texas ranch area, and it was called ‘reach and grab,’ because as you reached for your hat and grabbed it by the crown, your fingers made a crease on each side,” says Grant Sergot of Optimo Custom Hatworks in Bisbee, Arizona. “The creases on the side were more elongated in those days, more like tear drops.”

Hirt agrees, although he thinks the ‘reach and grab’ has just the twin indentations without the center crease, which he says is the hat style Tom Mix actually wore. The silent screen actor wasn’t alone. “North Texas, Wichita Falls, most of the cowboys at the turn of the 20th century wore ‘reach and grab,’” Hirt says.

No one’s sure why Tom Mix got the nod for the style, as he wore many variations throughout his career. “William Boyd, Hopalong Cassidy, is the only one who I can think of who wore only one style for his whole career,” Sergot says.

The hat style went out of popularity around 1945-70, when it was worn only by rodeo clowns or costume party patrons who wanted to look goofy.

The automobile likely killed the hat style the first time around. “You’ve got to remember, someone mounted with this style looks good in this hat,” Sergot says. “While, on foot, it looks kind of ridiculous.”

Historically, though, the crown has always indicated status or wealth. “In the early 1800s, the stove pipe hats signified social status: the taller the crown, the bigger the wallet. The stature of a man is a hat,” Sergot says.

Around 1970, there were certainly some who thought it added to their status. Outlaw musicians, such as the members of Asleep at the Wheel and Jerry Jeff Walker, picked up the style (mainly because it was so out, it was in). Peter Fonda wore the crease in 1971’s The Hired Hand. Cartoon character Honkytonk Sue (created by this magazine’s executive editor) wore this hat style while sharing her diatribes about men when she was first created in 1977. Even Steve McQueen wore a similar hat for 1980’s Tom Horn.

If you’re thinking of joining the legions of Tom Mix wearers, be careful what you call it. The Tom Mix is known as the Gus in Texas, the Montana Peak in Montana and the Western Slope in Colorado.

Whatever you want to call it, the hat is popular as ever. “The Tom Mix is my favorite style,” admits Sergot. “It’s the most complicated form to make with the pencil curl and the steep crease elevation. That proportion has to match.”

For those of you who agree, here’s some Tom Mix hats worth hanging on your hat rack.