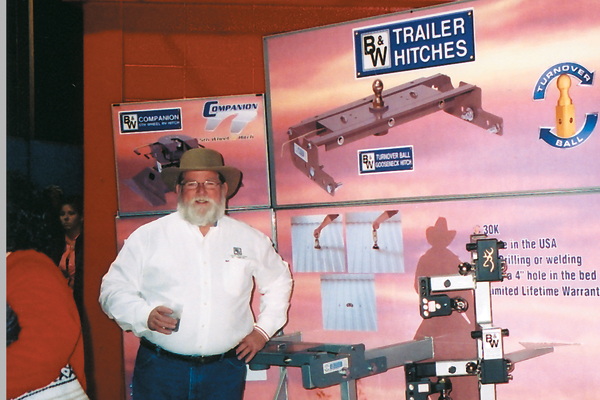 The official hitch of the Professional Bull Riding, Pro Rodeo Cowboys Association and Championship Bull Riding is the brainchild of two Kansans, who were down on their luck.

Joe Works’ family farm was suffering financially, as did many farms during the 1980s, while Roger Baker was seeing a declining demand for his skills as a classic car restorer. To supplement their incomes, the two took jobs welding at a local welding shop. During their breaks, they discussed what they could make and sell that would be all their own.

In 1987, the two opened B&W in a small garage in Humboldt, Kansas, with a goal to build “the highest quality truck beds on the market,” Joe Works says. When they learned of the problems in mounting a gooseneck ball to the bed of the truck, the two welders put their heads together to design a hitch that required no welding at all. Instead, their hitch ball could be pulled out, turned over and stored beneath the bed, allowing for a level, unobstructed bed. Their bolt-together mounting kit allowed the hitch to bolt to existing holes in the frame. B&W’s Turnover Ball hitch revolutionized the hitch industry, and nearly every gooseneck hitch manufacturer uses this type of ball storage and mounting system today.

Since 2001, Joe Works has been the sole owner of the company, which has since grown to 140 full-time employees. Obviously, the company has long outgrown the garage. This year, B&W is planning an expansion to the already 140,000-square foot facility.

And although B&W can’t help bull riders out with their 8-second ride, they have helped many rodeo cowboys get to their destination. “My dad and I were amazed at how easy it was to install,” Bull Rider Dusty LaBeth says. “Everything fit like it was supposed to. Every bolt and hole lined up perfectly. It took us about two hours, and by the next day, I was pulling my trailer.”

Is it possible: A hitch that sends you off without a hitch? It may sound like strange logic, but ultimately, this hitch is the best bet for a long haul.