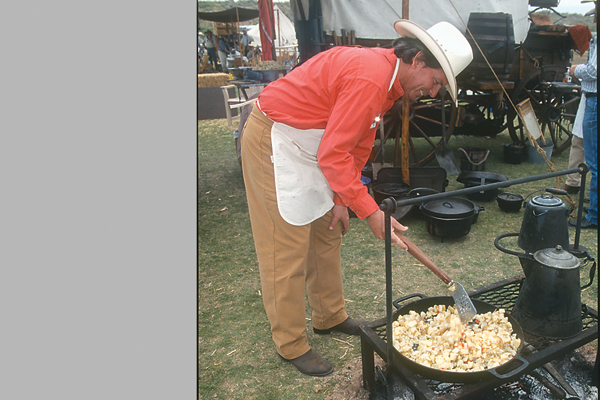 When a Cowboy’s in a pinch, he just tightens up the cinch, spurs his horse and rides right through it ’cause that’s the way the Duke’d do it. He’d Cowboy Up.”

Those first few lines from Producer Jeff Hildebrandt’s poem, “Cowboy Up America,” summed up the Cowboy Spirit Award (CSA) he accepted on behalf of the Starz!/Encore Westerns Channel at this year’s Bison Communities National Festival of the West, held March 18-21 at Westworld in Scottsdale, Arizona. His poem is a fitting tribute to the heroes of America—the cowboys who won’t quit—from the firefighters of 9.11 to John “Duke” Wayne, who was honored for his film contributions during the festival’s celebration of 100 years of Westerns.

When Hildebrandt first stepped on stage to accept the award, he took one look at the bronze statue designed by Rick Merrill of Yuma and told the audience “I’m gonna need a bigger saddle.”

The chief draw at the ceremony was 84-year-old Jack Palance (City Slickers), who, after accepting his CSA award, raised his cane above his head with both hands and repeatedly pushed it up and down. He told the audience that since he can no longer do the one-arm push-up he did at the Academy Awards in 1991, he’d do it the easy way.

Alex Cord (host for 1994’s Wild West Showdown) also had a little fun before he presented the CSA to his best friend Robert Fuller (Bonanza: the Next Generation), telling the audience that “If we both weren’t happily married … I might seriously consider asking for his hand. The guy’s a fantastic cook.” Fuller shared his award with his Laramie costar John “Smitty” Smith, who passed away in 1995.

The festival, founded by Mary Brown in 1991, has won numerous accolades, including being named one of the top 100 events in North America by the American Bus Association and one of the top 100 events in the country (out of 38,000) by the Events Business News. This year’s festival attracted a record-breaking crowd—over 65,000 people from all over the world, Brown says.

Old and new Western songs filtered through the crowds from the entryway and the three stages of continual Western music. Artists, such as Michael Martin Murphey and 18-year-old accordion player and Western swing singer Ginny Mac, gave performances. Murphey has the first gold cowboy album (Cowboy Songs) since Marty Robbins; Murphey’s concert was held at Brett’s Barn on March 20.

Models hit the runway at a fashion show of the Manuel Collection. The newest items are in the men’s boot line (the ladies’ line has been out for almost two years), says Tammy Smith, sales associate for the Manuel Collection. One of the models strutting Manuel’s couture was none other than Cheryl Rogers-Barnett, the daughter of film stars Roy Rogers and Dale Evans.

As the festival’s title sponsor, Bison Communities promoted log home living in Arizona’s White Mountains. A highlight of the festival was the 1,800-sq. ft. log cabin by Front Range Log Homes of Apache Junction. Another builder, Cozy Log Homes of Hildale, Utah, brought its pre-built log home to the festival for the first time this year. Although the company has traveled to log home shows before, its employees came to Scottsdale because “more people come through in this show,” says log home designer Jerry Barlow.

Western Writers of America joined True West at its compound of five tents created by Dave Ellis. A number of top Western writers signed autographs and gave discussions that ranged from Win Blevins’ mountain man tales to Paul Hutton and Bill Groneman arguing opposite sides of the Alamo battle.

Bess Edwards, the grand-niece of Annie Oakley, was also at the festival. So was Miles Swarthout, screenwriter of The Shootist. Buck Taylor and Dennis Weaver shared their Gunsmoke memories. Native Americans performed dances—the champion hoop, buffalo and eagle. Horsemanship and shooting skills were tested at the Cowboy Mounted Shooting Association’s Grand American Championship. And many exhibitors and attendees dressed as though they’d just stepped out of the 19th century.

At Festival of the West, the cowboy spirit continues to win the day.