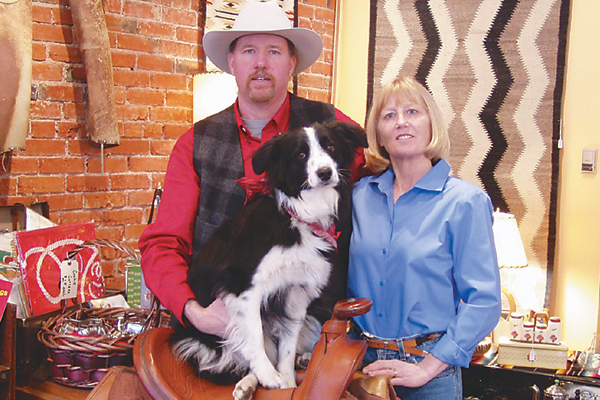 You’ve got to hand it to a business that gives its chief financial officer his own web page.

But then the CFO of Ruxton’s Trading Post in Manitou Springs, Colorado, is a bit unusual. You see, Mike and Gretchen Graham, owners of Ruxton’s, made their border collie Gus not only their store’s official greeter but also their company’s CFO. The Grahams describe their trading post as a “husband, wife and dog shop.”

The Grahams opened Ruxton’s Trading Post in 1998, specializing in old and new Western art and memorabilia. For about 10 years before starting the store, the couple had bought and sold Western artifacts at trade shows across the Southwest. Today, Ruxton’s offers an extensive inventory of spurs, saddles, chaps, cowboy hats, Indian rugs and pottery, plus items you won’t find in just any Western emporium: an antique corn whiskey still and chuckwagon rope maker, to mention only two.

The Grahams named their store for Ruxton Creek, which the trading post straddles. The creek in turn is named after George Frederick Ruxton, a 19th-century English traveler and writer.

In 2003, the couple coauthored the seventh edition of Old Cowboy Saddles and Spurs: Identifying the Craftsmen who Made Them, which is for sale at the store and on Ruxton’s website (www. oldwestantiques.com).

So the next time you’re traveling in sight of Pike’s Peak, stop in at Ruxton’s, pull up a stool and let Mike and Gretchen tell you all about their fabulous col-lection. Who knows, Gus may share his knowledge of inven-tory management.