Down to the Last Moccasin 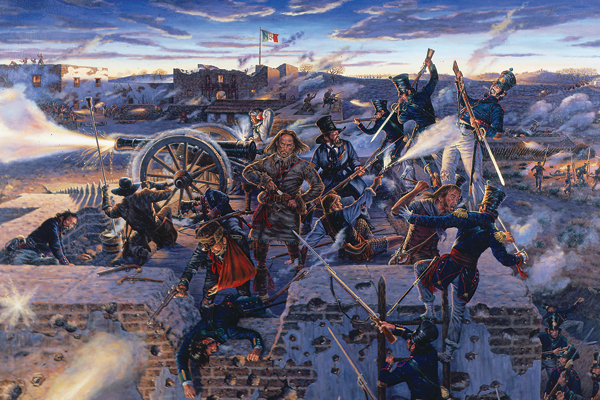 Although Gary Zaboly lives in the East, he asks us not to hold that against him, saying, “Frederic Remington was born in New York and died here, too, and his New Rochelle studio was less than seven miles northeast of my current residence (Riverdale, on the Hudson).”

Historical, American-based and frontier-related is how Zaboly describes his art, adding that much of frontier history concerns its military operations. Visitors to the Alamo who have seen Zaboly’s wayside signs—displaying his pen and ink drawings of each site’s likely appearance in March 1836—may be surprised to learn that illustrating early Texas history always presents a challenge to him.

“Mainly because virtually no contemporary art exists as reference matter,” he explains, which is why Hollywood can dress up the garrison in fringed buckskins in John Wayne’s 1960 The Alamo and then clothe them “as well-dressed members of the Pickwick Club” in John Lee Hancock’s 2004 The Alamo.

So where does Zaboly turn for reference? Period documents. “It always surprises me how often buckskins and hunting shirts of tow or linen
were worn by the early Texians … those frontiers-men had more sense than to wear their Sunday
best when doing dirty work in the field.”

Zaboly’s latest project depicts a man not much different than the mountain men and U.S. Army of the West, he says of the 2002 book he illustrated, The Annotated and Illustrated Journals of Major Robert Rogers. (His biography of Rogers will be published by Thoroughbred Press this spring.) This tough frontiersman, called a “man of uncommon strength” in his 1795 London obituary, shared a respect for Indian methods of survival, hunting and warfare. But Rogers’ environment was a primeval forest, making his battle tactics during the French and Indian War different from those used by a later generation living in the Western grasslands and mountains. Horses were used less in Eastern battles than Western ones, although Zaboly says “the Great Lakes Indians sometimes rode on horseback.”

An exhibit commemorating the 250th anniversary of the French and Indian War is one of Zaboly’s upcoming projects. He says he’s fulfilled his dream, which was to create artwork for the Alamo, but that he’d “like to tackle the Custer battle along the lines [he] did with the Alamo in Blood of Noble Men … [by] illustrating the eyewitness accounts and pictorially analyzing the battlefield.”

From the military campaigns of the Plains to the Trans-Appalachian pioneers, Zaboly enjoys painting the early frontier. His penchant for research, right down to the last moccasin, underscores the drama of military history that he brings to the canvas.