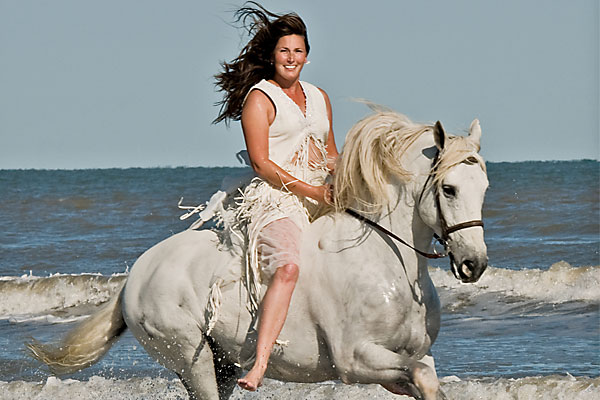 The idea of cowgirls in the sand was once just a fever dream Neil Young had about beaches in Spain—that was his explanation for the creation of one of his best known songs from his 1969 sophomore solo album, Everybody Knows This is Nowhere. At that time, a cowgirl wearing Western clothing at the beach was unimaginable. Cowgirls in the sand were put there by a bucking horse or an ornery calf.

Until the 1980s, most cowgirls outside of rodeo arenas and Country music halls wore smaller versions of men’s Western apparel—maybe feminized with a Peter Pan collar or a little ruffle sewn along the yoke. In fact, some of the top-selling Western styles for women in the first 30-40 years of the existence of Western style were matching “his-’n’-hers” outfits—mostly shirts, at that.

As a fashion category, women’s Western didn’t really catch on until the late 1970s when everybody wanted to look Western because John Travolta learned the Cotton Eyed Joe and Debra Winger’s movie career took flight from the back of a mechanical bull. New versions of Western apparel for women popped up like fairy rings after a rainstorm.

Some of the first women’s Western apparel lines—such as Salaminder and Circle T—are no longer with us, but the Urban Cowboy movie fad allowed designers like Sally Von Werlhof, Marilyn Lennon, Patricia Wolf and Pat Dahnke to step out of hidebound cowboy looks and create distinct and tasteful Western fashion for women. It prompted already established Western apparel and boot brands, including Wrangler, Roper, Panhandle Slim, Miller, as well as Acme, Justin and Tony Lama, to develop separate and complete categories for women. Mainstream fashion designers also took note of Western at this time, especially Ralph Lauren. The ’80s set the stage for lifestyle and fashion lines like Double D Ranch, Brazil Roxx, Cowgirl Tuff and Kippy’s.

Today, cowgirls dressed to the nines in Western and Southwestern glam and glitter are digging their toes in the sand in deserts and beaches around the world, and the fashion world is digging the look. Of course, the first cowgirls—the women who shot, rode or roped their way into the hearts of fans at Wild West shows and early rodeos—made these changes possible. Early cowgirls dared to shed bustles and voluminous dresses to compete with men in rodeos. Their freethinking ways and subversive attire scandalized, tantalized and inspired all at the same time.

Keep in mind, these early cowgirls were by and large the progeny of brave and rugged pioneers who had endured the hardships and heartaches of opening and settling the West. They were the daughters of hardy women who had left the safety and civilized comforts of farms and cities to pursue dreams of better lives for themselves and their families, many of whom suffered or died for those dreams.

For all the glory heaped on the men who explored and settled the West, you have to wonder how they’d have fared with the cumbersome vestiges of Victorian modesty and fashion borne by pioneer women: hoopskirts, bustles and Mother Hubbards. Women helped settle the West, and Western women helped secure for themselves and women worldwide the same rights as men.

Bottom line: The women who helped settle the West had enough sand to create their own beaches. As Neil Young says in the chorus of his famous song, “It’s the woman in you that makes you want to play this game.”