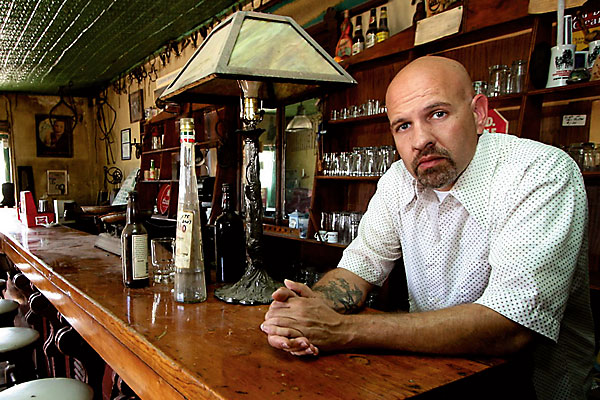 A family of wild turkeys is to thank for Josh Bond and his heroic efforts to save an abandoned town almost everyone has overlooked.

It was 14 years ago that this born and reared New Mexican—then 23 years old and a new resident of Truth or Consequences—stopped his car to let wild turkeys pass. He found himself in the unthriving town of Cuchillo.

In the heart of town he found what he says “passed for a strip mall in the 1800s”—a bar, mercantile, post office, feed store and inn in a 7,000-square-foot building. He stopped for a drink and learned the town had been a main stagecoach stop in the 1850s. The store later served the area’s farming and mining lands, while the post office was in use until the 1930s. In its heyday, Cuchillo had some 2,000 citizens, but it was now home to about 35 people. Josh felt a pull.

Over the years, he watched as the town went through one catastrophe after another. In 2000, some buildings burned and floods destroyed adobe walls. In 2004, the saloon that is so cozy—its long and narrow bar is the kind of place you’d hold up on a stormy afternoon to swap stories with the old-timers—closed its doors.

Three years later, Josh bought the building to restore it to its former glory. ”The simplicity of this town is what drew me,” he says. “It feels like you’re stepping back 150 years.”

“I grew up with mud on my hands,” he admits. Josh is following in the footsteps of his late father, Rick Bond, an adobe architect and steel sculptor. Before buying the Cuchillo Bar, Josh had already bought and restored an old adobe in Truth or Consequences, and sold it for a profit.

With his latest purchase, Josh admits he has bit off what is proving to be a big chew. “This place is like a treasure hunt,” he says, preferring to focus on what’s right with the place, rather than what’s wrong. “I’ve been in rooms that no one has entered for 50 to 60 years. They came filled with antiques and boxes and boxes of original documents and records.”

He’s hoping to get help from one of the state universities to catalogue the records. After all, Cuchillo is on the Geronimo Trail National Scenic Byway; it’s the former neighborhood of the Warm Springs Apaches where Geronimo was a medicine man, and, in fact, it is named after Warm Springs Chief Cuchillo Negro (Spanish for “Black Knife;” his Apache name was Baishan). He was known to raid alongside Mangas Coloradas during the 1840s-50s.

Halfway between Albuquerque and El Paso, Cuchillo is near the Gila National Forest, the largest national forest outside Alaska, and Elephant Butte, the largest lake in New Mexico.

Josh hopes to rebuild the bar as a microbrewery. He sees a ready and willing clientele in the deer, bear, mountain lion and turkey hunters who come through town on their way to the Gila National Forest.

He envisions the mercantile as an ice cream shop, and he is remodeling the hotel into what he calls a B&BYOB: Bed and Bring Your Own Breakfast. He’s had some satisfied customers already, but he admits the project is “too much for one man: I have the weight of 20,000 deteriorating adobes on my back.”

Even so, Josh holds fast to his dream of the town being like it used to be, even as he fears “I was born 100 years too late.” He is looking for a partner or financial backer or, if worse comes to worse, he’ll be forced to sell the place. That isn’t what he wants. “If I can’t do it, I hope to find someone else who can restore this place. This is New Mexico history. This is the Wild West. There’s an amazing amount of history here.”