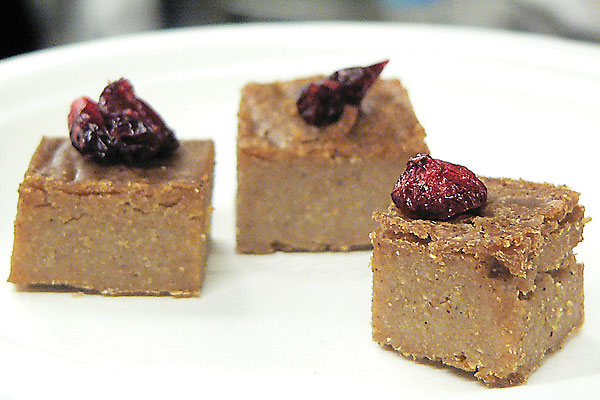 “We have cooking classes three days a week. The girls are taught to make all sorts of nice things to eat….

The “muck-a-muck,” or food of the Makah in the Pacific Northwest, included jerked meat and smoked fish like salmon and halibut. These Indians in Neah Bay, Washington, also dined on mussels, clams, oysters and whale. By 1873, they were including bread, molasses and sugar in their diets.

The Navajo in the Southwest used mesquite seeds, or “screw beans,” to make flour and other edibles. The Navajo raised crops of corn, beans and squash; they also gathered nuts, fruits and herbs, and hunted deer, antelope and other small game. After the Spanish introduced them to sheep and goats, the Navajo began raising herds for their meat and wool.

While the Navajo of New Mexico dined on many things, fish was not part of their diet. They superstitiously believed if they ate fish, their bodies would swell up to an enormous size and their bones would break out of their skin. Other tribes, like the Comanche and Wichita, ate fish, but they would not consume any
with scales.

The Mojave, a Southwest tribe mainly concentrated along the Colorado River, were known for growing crops to eat such as wheat, pumpkins, squash, muskmelons, corn and beans.

The Bannock and Shoshone in Idaho lived principally upon the Blue Flowering Camas root and on wild game such as buffalo. In 1878 they unsuccessfully fought the U.S. Army to salvage their Camas Prairie.

California natives made bread and soups out of acorns; Mono Lake Indians made their soup from angle worms, thickening it with grass seed flour.

A census enumerator in 1900, Mary Pradt Harper recalled a Navajo hogan feast while she was posted at Fort Defiance on the Arizona, New Mexico border: “My hostess invited me [to] join the family at the evening meal. This consisted of a stew of mutton…native bread, and coffee.”

Fry bread was born out of rations distributed by the government. Its invention reveals how tribes like the Navajo adapted to their environment.

Chef Freddie Bitsoie, of Navajo descent, says of our featured recipe: “This cake dates back to at least 1,000 years ago. Of course, it could be older, only because Ancient Puebloans could have made the same cake.

“Cranberries and maple syrup were around in the Northern Hemisphere, but not this far south. The traditional corn dish was less sweet and very bland when we compare flavors from the older version. Since our flavor profile has evolved to the complexity as it is today, I use cranberry and maple syrup as sweeteners, rather than using sugars or any Western-influenced sweeteners.

“The usage of the wheat germ is to help firm the cake to the consistency that is popular to how the cake is enjoyed today, but other than that, the cake is still very pre-Iberian.”

Bring up of water to a boil. Pour the boiling water into a small bowl of wheat germ.

Pour six cups of water and the cranberry juice into a large pot and bring to a boil. Add the cornmeal and mix well with a wooden spoon. Add more water if necessary. The mixture should be thick and firm, but still moist enough to stir by hand.

Add the cranberries, syrup and moistened wheat germ into the pot and mix very well.

Line the bottom of a 9 x 12-inch baking dish with parchment or wax paper. Bake in a 250° oven for four hours.

When done, the cake should be firm and moist. Allow to cool; cut the sides away from the pan and remove from the pan. Cut into desired square sizes and serve warm. Keep covered, otherwise it will become very firm.