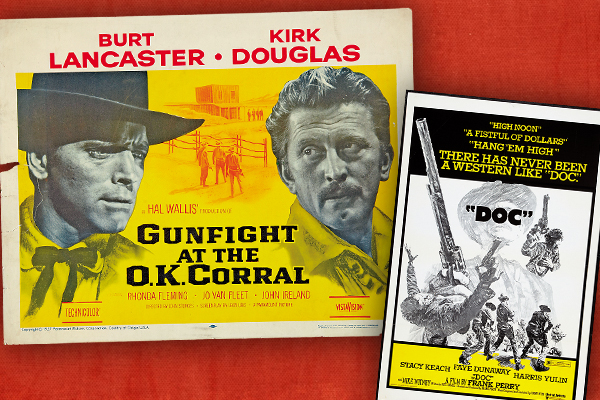 In November 8, 1887, gambler and gunfighter John Henry “Doc” Holliday finally played his last hand, succumbing to the tuberculosis that dogged him most of his adult life, but his legend had been building even before he took his last breath.

This was the man who had stood tall behind Tombstone’s O.K. Corral, backing up friend Wyatt Earp and shooting his way into the pages of newspapers and pulp magazines around the world.

Earp would live to see movies explode as the popular art of the 20th century; he even formed a friendship with a young director of silent films named John Ford. Filmmakers caught on to the allure of Earp and Holliday’s story. Although the duo’s lives were sometimes embroidered beyond recognition, the movies immortalized both. The interest in Holliday has grown in recent years, which is why, this winter, McFarland will release Doc Holliday in Film and Literature, by Shirley Ayn Linder, a finely researched record of the fictional Holliday.

With a foreword by True West’s Historical Consultant Paul A. Hutton, Linder’s book lays out the wildly different ways in which Holliday has been portrayed in the movies and television, culminating in Val Kilmer’s favored interpretation in 1993’s Tombstone. From incoherent drunkard to deadeye shot, the character of Holliday has offered actors a thousand conflicting facets. Those contradictions made me leap for the DVD shelf, to rediscover these portrayals of the “dentist who could out-draw any man.”

Law and Order, a 1932 film written by John Huston, is often recognized as the first film about Earp and Holliday, although their names were not used in the movie. Walter Huston makes an impressive Earp, while Harry Carey is a solid Holliday, playing him with a hint of the tuberculosis that killed the man.

Victor Mature’s Holliday in My Darling Clementine is a tortured soul. Ford’s film, with its simmering violence, strays wild in its facts, making Holliday a surgeon rather than a dentist, and Mature looks like anything but a man stricken with T.B., and yet, it all works. This is Mature’s finest performance, capturing Holliday’s inner torments with amazing skill.

I confess to not being a big fan of Kirk Douglas’s hysterical Doc in 1957’s Gunfight at the O.K. Corral. Burt Lancaster is a good, stalwart Earp, but for me, Douglas never finds the balance of his character, who comes off as too high-strung. An enormous hit, the movie remains a favorite among Westerns fans.

In 1967’s Hour of the Gun, John Sturges directed James Garner as a revenge-scarred Earp and Jason Robards as a funny, world-weary Holliday. Unlike the over-the-top performance that Sturges got from Douglas in his 1957 film, Robards captures a subdued, tough melancholy. His gunfighting dentist is a man with a history, whose acceptance of his own death makes him unafraid, and dangerous as hell.

Stacy Keach makes an intriguing Holliday in Frank Perry’s revisionist 1971 look at the O.K. Corral. In “Doc,” Holliday is the force of violent nature, not Earp, and the film views their friendship through his eyes.

Dennis Quaid is the streak of lightning in Lawrence Kasdan’s somber 1994 epic, Wyatt Earp. The true, brutish nature of the Earp brothers is on full display, with Quaid’s Holliday backing up his friends with a gun and smile. The film’s emphasis on history gives it factual strength, but its drama lacks energy, especially when compared to Tombstone.

Val Kilmer’s Doc has become the standard against which all others are compared. Funny and grand, Kilmer plays out his deadly encounters with great irony. As our Huckleberry, he is the heart of Tombstone. Yet while I love him in the film, Jason Robards and Victor Mature strike deeper chords for me. Robards and Mature seem haunted, coming across as men who have seen what’s on the other side of the curtain, only to return and stand by their friend.

The real-life Holliday never had an inkling of just how many enormous talents would try, over the next century, to capture a fragment of who he was for the rest of us.