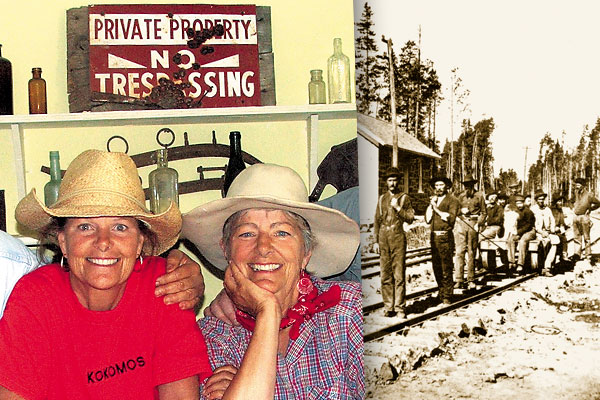 One day, a dozen years ago, two sisters from New England decided they “never wanted to wear high heels or pantyhose again.” To keep that promise, they traveled an amazing distance, all the way to a Colorado mountaintop.

Sam Law and Deb Lathrop each had successful business careers in Boston, Massachusetts, when Law took a break in 2001 to enroll in an environmental leadership graduate program in Boulder, Colorado. When her sister visited her, the two of them discovered the Spanish Peaks town of La Veta. “Two days later, we made an offer on a house,” Law says. “Then we called our mother.” She moved out too.

Their adventure was just beginning. “We found 300 acres on top of a mountain,” Law recalls. “Funny, it had a town on it. We wanted the land. We waited for them to say, ‘So much for the land, and the town is this much,’ but they never said it. There was just one price—we were just blown away that we ended up owning both.”

Located in Ute country, near Fort Garland, the nine-building town had been built in 1877, a year after the arrival of the Denver & Rio Grande Railway, and it still holds the distinction of having the highest train depot in the world. The Rio Grande Scenic Railroad has reestablished passenger service to nearby La Veta, but you’ll have to head by car to reach this town’s depot, as well as its chapel, tavern, dance hall, school, barn and cabins. The place didn’t even have a name when the sisters bought it, Law says, it was called the “settlement on Old La Veta Pass.”

The town got its new name from the shorthand the sisters used whenever they discussed it, “Are you going uptop?”

The real shocker, Law admits, came when “we discovered there was nothing protecting this town. If we’d have wanted to tear it down, we could have. We were terrified at that. We realized we were stewards of a ghost town and a piece of history. We wanted to make sure nobody could ever tear it down. Our first goal was to get all the buildings on the National Register of Historic Places.”

By then, lots and lots of hard work had transformed the town. “The first two years were the dumpster years,” says Law, recalling how the sisters had to clean up decades of neglect. But the job looked promising: “Deb can see the bones of a place, and our buildings have good bones.”

While the sisters repaired the buildings—Lathrop even learned electrical work so she could rewire everything—they began meeting folks who had discovered the town long ago.

“The first person we met was Apache Suzie. She said she had been coming up to the chapel for years, whenever she was depressed,” Law says. “We meet people whose families had squatted here.”

To help pass along those family stories to the public, the sisters opened a museum in the depot. But the most popular spot in town is the tavern, which has such great acoustics, musicians flock here to play.

Now that the sisters have saved this town, they would like to hand it over to a new owner. They’re not sure what their next adventure will be, although they do know one thing, they won’t be wearing any high heels or pantyhose.