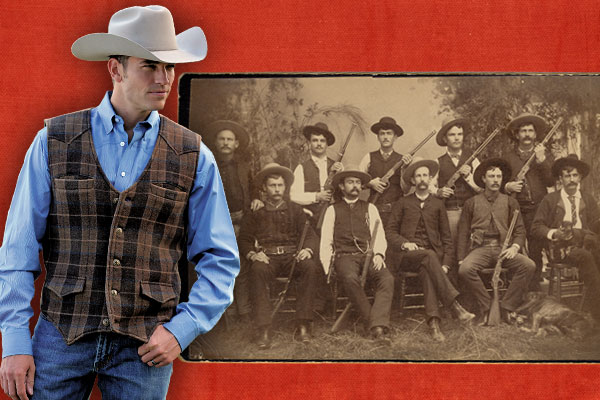 Mustaches, hats, boots and vests became sartorial staples among males in the American West during the 1800s. Case in point is the accompanying photograph showing members of Company F of the Texas Ranger’s Frontier Battalion.

The vest—that sleeveless upper body garment meant to be worn under a topcoat—was the Westerner’s nod to Victorian propriety, which dictated that gentlemen wore vests over their shirts. Indigent cowboys, well-heeled card sharps, ornery outlaws and stalwart lawmen alike might shuck the morning coat, but at least a few of them didn’t go out in public without a vest.

The style started about 200 years earlier, in 1666, when England’s King Charles II took a liking to the sleeveless tunics brought back from Persia by British travelers. He decreed that his noblemen should sport these “vests.” The fashion was to wear the vest under a long, formal coat; both were often made from the same fabric. Generally cut so it stopped at the waist, the vest became known as the waistcoat (pronounced “west kit”).

By the 1800s, the vest, as the waistcoast was known outside of Britain, was tightly fitted, often over a corset. The effect under a long, broad-shouldered topcoat nipped at the waist was the masculine version of an hourglass figure. It is a look that can be accomplished with the vest alone, and one that is echoed in contemporary cowboy shirts designed with shoulder-enhancing yokes that suggest a narrower waist.

The vest remained a key component in gentlemen’s attire throughout the world until the 20th century ushered in less formal attitudes about clothing and general deportment. At that time, the vest pretty much disappeared. You could still find vests worn as a part of three-piece suits and in disparate locales: Eastern Europe, parts of central Asia and the American West.

American ranchers continued to wear vests as much out of function as tradition. The rancher’s vest offered pockets in which to stow a pencil and a notebook so a cowboy could tally cattle or sheep. Other pockets might carry tobacco and fixin’s. Perhaps more important, a vest offered a sleeveless layer of clothing that kept a cowboy warm, but allowed his arms the freedom to swing a rope or engage in other trail activities.

Vests were one of the few Old West styles that Hollywood got right in its cowboy movies. Everything else—from hat shapes and sizes, to denim jeans with belts too ornately stitched, to inlaid boots—was fanciful eye candy or a product of wardrobe designers too lazy to research the era.

Hats and boots remain Western wardrobe essentials today, but mustaches and vests are not as common. Even in Western fashion, vests are regarded more as an accessory than as a wardrobe essential. Contemporary Western vests run the gamut from sleeveless denim jackets to boiled wool heat retainers, and from bright, jacquard silk dazzlers to puffy down-filled weather beaters. Any vest paired up with boots and a broad-brimmed hat becomes quintessentially Western—for men and women alike.