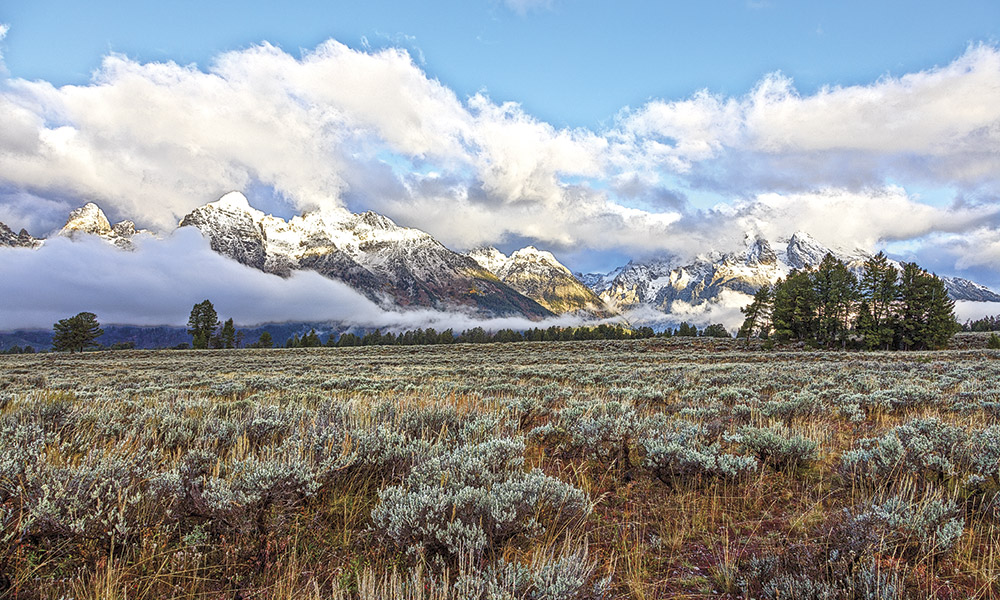 Owen Wister’s The Virginian, A Horseman of the Plains, published in 1902, considered to be the first Western novel, is about a black-haired Wyoming cowboy, his love for a Vermont schoolteacher and his search for justice during the early days of Wyoming. The Eastern-born Wister wrote the classic after many summers of seeking better health in Wyoming.

In 1885, Wister, a friend and former class-mate of Theodore Roosevelt, visited the VR ranch near Casper, Wyoming, on Roosevelt’s recommendation. From that port, Wister ex-plored Wyoming—at the time still a ter-ritory—via train, stagecoach and horseback.

During Wister’s travels, he discovered a range of characters and events that later became a part of his novel and short stories. The Virginian takes place in Wyoming, set against the backdrop of the Johnson County War. Many of the places Wister visited appear in the novel. Although some of the names are fictitious, many are based on real places. In one segment in The Virginian, The Virginian follows the rustler’s trail from Casper, past the Greybull River, through the Teton Mountains and into Idaho. Wister camped and hunted many times in Yellowstone and Jackson.

The “black-haired cowboy” known as The Virginian in the novel, travels from Medicine Bow, Wyoming, to Buffalo, Wyoming, chasing the rustler Trampas, to whom The Virginian deals out frontier justice, while staying at the Occidental Hotel during the days prior to his marrying Molly Wood.

In 1885 Wister rode the Union Pacific train from Pennsylvania. It was a long trip, but first-class passengers rode in beautifully appointed cars with plush velvet seats that converted into snug sleeping berths. The finer amenities included steam heat, fresh linen daily and gourmet food in the elegantly appointed dining car.

In the 1880s, trains could take passengers from coast to coast in 83 hours, in much more comfort than the jolting, hard seats of a stagecoach. Stages were still in use, taking passengers from rail stops to outlaying communities.

In 1885, Wister, after a brief stop in Cheyenne, and a drink at the Cheyenne
Club, took a stagecoach to Douglas and then a wagon to the VR Ranch, on Deer Creek, outside of Casper. Major Frank Wolcott owned the ranch. He was a member of the Wyoming Stock Growers Association, one of the principals in the Johnson County War.

While staying at the VR Ranch, Wister went with some of the Major’s hands to Medicine Bow, to pick up some fish for stocking lakes. Medicine Bow impressed Wister as not much of a town and he used it as the central town in The Virginian. While awaiting the train, Wister had to sleep on the counter in the Mercantile, which is reflected by his narrator in The Virginian, who also spends an uncomfortable night on the counter of the saloon. (The Virginian, by a little deception, finds a bed for himself.)

Medicine Bow River runs nearby, giving the steam locomotives, which needed thousands of gallons of water for the steam boilers, a ready water supply. Medicine Bow, like many watering spots along the route, became a trading center and later a town. In 1885, according to Wister, Medicine Bow consisted of a depot, coal chute, water tank, one store, two eating houses, a billiard hall, tool houses and a feed stable, as well about six “shanties.” There were 29 buildings in all.

Today, little has changed, except that in 1911 The Virginian Hotel was built, and was, at the time, the largest hotel between Denver and Salt Lake City. Still in operation today, it is located midway between Laramie and Rawlins, Wyoming, and offers in-the-period hotel rooms, a fine restaurant and historic bar. As of the 2010 census, Medicine Bow boasted of 284 people.

The Owen Wister Suite, complete with a desk Wister used for his writing, overlooks the
old depot and the Wister cabin, which was moved to Medicine Bow in the 1970s.

Trains run by nearly every hour, just as they must have done when Wister spend the night on the counter of the mercantile, which still stands across the tracks, although it is now deserted and empty.

From 1885 through 1912, Wister made several trips to Wyoming. As Cheyenne was the largest town in Wyoming at the time, and the territorial and later state capital, he spent several days there on his travels.

The Nagle-Warren Mansion, which was built in 1888, is a glamorous old house built in the style of the 1880s cattle barons. Although Senator F.E. Warren didn’t buy the mansion until 1910, Owen Wister, in 1895, wrote in his journals that Senator Warren joined him and Mr. Loomis at the Cheyenne Club. The senator was “most cordial” and presented Wister with a letter, bearing the official state seal, requesting that all citizens of Wyoming show “Wister civility,” wherever he traveled. Wister felt very proud of the letter.

Although there is no record that Wister ever stayed in the Nagle-Warren Mansion, he undoubtedly saw the mansion in Cheyenne, as the historic UP depot is visible from the mansion and within easy walking distance. He surely stayed in similar homes when visiting the rich ranchers in the area.

Also within walking distance of the mansion today are many local and chain restaurants.  Two of the best are the Albany, right next to the train depot, and the Rib and Chop, just up the road.  Take in the old Cheyenne depot, now a museum and a brew pub, and the depot plaza, to get an idea of the mode of travel that pre-dated automobiles.

When he was looking for material for his books, he traveled to Buffalo and Kaycee, Wyoming, the main areas of the Johnson Country War. There was no train service to Buffalo, so they traveled by horseback and by wagons.

In Buffalo, the Occidental Hotel is one of the oldest buildings in the town, and it was here that Wister set his final chapter of his book—in which The Virginian, even though he knew that the shooting of the rustler Trampas might end his hopes of marrying Mary Stark, knew that justice had to be served. He dealt it out with lead.

The Occidental was built in 1880, but has been refurbished. Much of it is original.

Although legend has it that Wister wrote some of his novel in the Occidental, and saw a gunfight in the street from the balcony of his room, now called the Owen Wister Suite, there is nothing in his journals that says he actually did stay there.

However, in a letter to Johnson County Historian Lott, he wrote that “Bow-Legged Mountains” in the book were based on the Big Horn Mountains, and the town he described sounds like early-day Buffalo. Lott was sure that Wister at least knew of the Occidental Hotel and may have used it as the model for the hotel in his book.

Many other famous people did stay there, including Wister’s good friend, Teddy Roosevelt. Other famous and infamous guests included Butch Cassidy and the Hole-in-the-Wall Gang, Calamity Jane, Buffalo Bill and Tom Horn.

In 1911, according to his daughter Fanny Kemble Wister, Wister took his wife and their four oldest children to Jackson, where they camped throughout Yellowstone Park. They had two teams of horses, and a buckboard, as well as a camp outfit in another wagon. Fanny said they hated to return to the East, after living in “their mountains” for the summer. He had hunted in the area on earlier visits and loved the Tetons.

In 1912, thinking that Wyoming would again work its magic and cure his body and mind, he arranged to stay at the S.W. Aldrich Ranch east of Yellowstone National Park. This was the year he also purchased 160 acres of land near Moose to put up his cabin.

On the eve of his arrival at the ranch, Wister stayed one night at the Irma Hotel in Cody, Wyoming, which was built by Buffalo Bill in 1902. In 1901 the railroad built a spur line to Cody, and Wister likely took the train into Cody in 1912.

The Irma Hotel is a unique and elegant part of Wyoming history. Still a fine hotel today, with rooms modernized but kept in the era, and situated in the middle of Cody, it is a well-known landmark. Although the stop light and electrical lines take away some of the historical mood of the place, it still seems like a step backward to the time when Buffalo Bill hosted friends and business acquaintances here. The Buffalo Bill Suite is the best in the hotel, and reflects the grandeur of
the bygone era. Enjoy good food in the restaurant, and enjoy a drink at the historic cherry wood bar, a gift to Buffalo Bill from Queen Victoria. A similar bar is also in the Sheridan Inn, in Sheridan, Wyoming

Owen Wister traveled extensively throughout the US and Europe, but Wyoming remained one of his favorite places. Each year, he would have relaxed in the luxurious train cars, to the sound of the wheels clicking along the track, carrying him West. He would have looked out the train windows, watching the flat plains and farm country rise into the high Wyoming plateaus. He loved breathing the fresh air, and seeing the mountains rise off the Valley floor. He surely must have felt a pang of sadness each time he waited at the Cheyenne station for the train to carry him eastward again at the end of the summer.

Writing his novel, The Virginian, was perhaps a way to feel he was somehow still in Wyoming during his winters in the East, and a way to bring the Wyoming and the characters he loved to his readers.

Cynthia Vannoy is third generation on the family ranch in Northeast Wyoming.  She loves researching, writing, and photographing the history of her beautiful state.