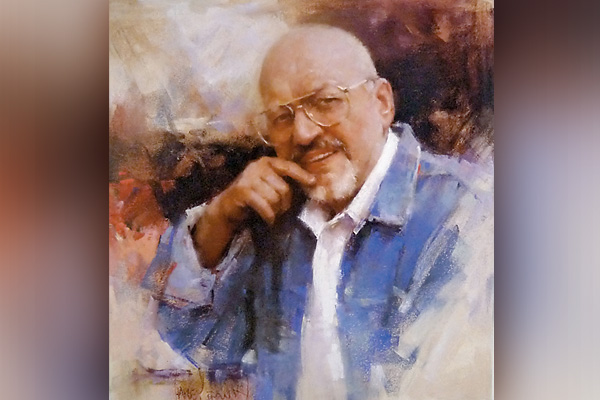 Harley Brown is a man of many faces.

He is Canadian. He has a Russian alter ego. He was an English expatriate. But above all else, he is an artist.

He is an artist of magazine illustrations and an artist of words inside three best-selling books. However, he is mostly known for being an artist of portraits that capture the faces of American Indians.

Inspired by bands of American Indians who lived down his street in his native Saskatchewan, a prairie province in Canada, Brown found “such interesting faces with their cheekbones, and some of the older guys with the extremely dramatic faces that they have with the noses and the lips.”

Finding their history “such a great mystery that we still have as part of our culture,” he says he was eventually drawn to the powerful aura of Sitting Bull, the Lakota Sioux holy man who had led his band to exile in Saskatchewan in 1877. Brown gained notoriety when his portrait of Sitting Bull set a record for the artist in 2008 when it sold at the Coeur d’Alene Art Auction for a $30,000 bid, twice its estimation.

Like most artists, though, it took years of dedication, sketching and begging before Brown found success in the Western art world.

“They kicked me out of art school,” Brown admits. “At that point, I said to myself, as I was standing outside the school, crying, ‘Well, I’m not going to work for a living…. If I do make money, or I don’t make money, I’m going to do art. And nothing else.’”

With a pocketful of dimes and living on a gas station credit card in Helena, Montana, he peddled his art at restaurants, galleries and frame shops, but no one seemed interested in his work.

“In the last moment I went to the State Historical Society, which is a big deal,” Brown says. “I thought, ‘I got nothing to lose,’ went in there and showed my work to the curator.”

He walked out with an offer to be the first living artist shown at the institution in a one-man exhibit. His work sold out.

For this July’s centennial celebration of the Calgary Stampede, Brown has earned the prestige of creating an original drawing for the event’s poster. He painted it to connect the history of the stampede to today’s younger generation.

Looking ahead to the future, when people come across his art, it’s not his face that he wants  remembered.

“I hope they see, number one, the person,” Brown says. “That’s what it’s about. I want them to see who I’m painting. That person, that individual, the life in that person brought to life.”

(From left) Red Cloud, Mother and Child and Geronimo painted by Harley Brown.

You may remember Kim Novak as Lady Godiva in 1969’s The Great Bank Robbery, but Brown knows the actress through her artwork, which he calls surreal. “She paints how she feels about her subjects—somewhere between Surrealism and Post Impressionism,” he says. He feels her painting Horse and Dog best reveals Novak’s “dreamlike approach in her art, and shows where her heart lies.”

“Scot Paisley [of Alberta, Canada] is my nephew. He is very involved with the story of early natives,” Brown says. “He loves doing portrayals of individuals of the Alberta and Montana tribes. His technique is representational with a bravado flair.” The shown Paisley oil will be featured at the Calgary Stampede Western Art Auction this July.