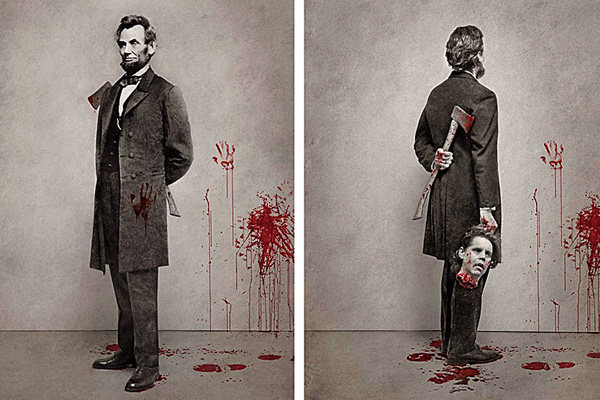 The Western was in a holding pattern, for the most part, in 2011.

We had Rango, which pulled out a shopping cart full of awards, including “Best Animated Feature Film” in this year’s Oscars.

Cowboys & Aliens had its defenders, though not too many. Of all the reasons as to why it jumped the tracks, possibly the kindest thing we can say about the film is that it defied expectations; it was a B-Western made out to look like an A-Western.

Hell on Wheels was the second-highest rated series on the AMC cable station (the Walking Dead was number one), and it’s fair to say that the series exceeded our expectations. We’re looking forward to seeing where it goes in the second season.

And Luke Perry scored big in the first Goodnight for Justice made-for-TV movie—so well it has generated at least two more movies. If the ratings stay good, Perry, and his roving circuit judge, could keep the ball rolling for years. He certainly has the drive and the enthusiasm.

But 2012 is going to be a little different.  We have three big pictures before us; all of them are unique in the political context they promise to provide, and yet they all have something in common—these Westerns take place in the post-Civil War era, a period featuring notorious outlaws and famous lawmen, the escalation of the Indian Wars and the army’s involvement of those struggles, and the great cattle migrations. Prior to the Civil War, all but a few of the cities west of the Mississippi were mud holes and shacks, forts and trading posts. Trains went west before the war, but the transcontinental railroads didn’t really arrive until the 1860s-70s.

Two of the movies portray America’s 16th president, Abraham Lincoln. A popular subject during the first half of the 20th century, Lincoln was depicted at least 200 times, sometimes peripherally; other times, he was the subject of the entire picture. Studios released the silent-era Lincolns, such as 1924’s The Dramatic Life of Abraham Lincoln. Walter Huston played Abraham Lincoln for director D.W. Griffith in 1930. Henry Fonda starred in John Ford’s Young Mr. Lincoln in 1939. And Raymond Massey took the lead in 1940’s Abe Lincoln in Illinois. In those days, Lincolns were everywhere.

The first of the new batch of Lincolns will be released on June 22, and it covers several decades in Lincoln’s history, beginning in his earliest years all the way to his death. This 3-D movie, which was based on a successful 2010 novel, will be illuminating a hitherto secret aspect of the great emancipator’s career.

Abraham Lincoln: Vampire Hunter tells the firsthand written story describing Lincoln’s fierce struggles to eradicate the living dead—a series of battles that continued throughout his entire life and may have had something to do with his death. Scriptwriter/novelist Seth Grahame-Smith has promised that these creatures will not in any way resemble the touchy-feely, romantic teen emo kinds of vampires.  These are the other kind—the rending, clawing, gleaming, fangy types. Lincoln has his hands full dealing with these monsters, and much of the time, his hands are full of sharp instruments, like axes, according to the trailers.

Maybe this premise sounds like something of a stretch. Maybe Lincoln had other work in mind, like winning a presidency, abolishing slavery and combatting the rending, clawing types of politicians he had to reckon on, who didn’t brandish actual fangs.

Could be the hitherto unknown vampire side of Honest Abe’s history is a little hard to buy. That said, this movie looks great—it’s produced by Tim Burton, and the director, a Russian-Kazakh named Timur Bekmambetov, is one of the big international talents of weird—guys who are in the ranks of like-minded mad movie makers like Guillermo del Toro and Peter Jackson. The trailers look terrific, and based on the book and everything else we’ve seen so far, Abraham Lincoln: Vampire Hunter looks like it will be one of the big tentpole thrill pictures of the summer season.

Of course if you want your Lincoln straight, another Lincoln movie will arrive after Thanksgiving, and it already has Oscar buzz spinning around it.  This is a big picture, directed by Steven Spielberg and starring Daniel Day-Lewis, who stepped in when Liam Neeson stepped out. This movie is so dignified, they’re not even referring to the man by his first name. It’s not Abe, nor Abraham, nor Lincoln: The Movie. This movie is simply: Lincoln.

This is a star-studded affair, loaded to the beams with major talent, and it’s based on Doris Kearns Goodwin’s enormously regarded biographical portrait, 2005’s Team of Rivals.  The section of the film Spielberg and his writers are concentrating on takes place in the last few months of his life, during the end of the Civil War. This is what we think of as a “prestige picture,” or a class act. If any vampires are lurking around the Congressional corridors, we can assume they will be good enough to keep to themselves, at least until the Reconstruction Era goes into full swing.

Spielberg’s massive cast-loaded Lincoln will bounce together in December with a Western by Quentin Tarantino. His movie, Django Unchained, might just be one of his best and most ambitious movies in his career (at least, based on a draft of the script leaked out on the Internet). One thing is for certain, moviegoers won’t mistake his movie for Spielberg’s Lincoln, even though both films take place in the middle of the 19th century.

Tarantino does have a history of angering or offending his audiences. It helps if you go in knowing that most of his movies take at least some of their inspiration from Spaghetti Westerns. He utilizes Spaghetti Western music, camera angles and themes. His work is inspired by the second tier of Spaghetti filmmakers, like Sergio Sollima and Sergio Corbucci. The Clint Eastwood pictures that Sergio Leone made, plus Once Upon a Time in the West, didn’t even begin to hint at the dark end of the Spaghetti Western spectrum.

Tarantino’s first movie, Reservoir Dogs, steals a scene directly from Corbucci’s 1966 Italian movie Django—it’s the scene when an ear gets cut off. It also gives you an idea of what Tarantino is thinking about when he uses the name “Django.”

Somewhere between 30 and 50 different European movies have been made with the name Django, either in the title or as the name of the character.  Most of them have nothing whatsoever to do with each other, except that the title guaranteed box office sales.  Some of these movies are decent, some reek, but they all started with that first movie, Django, starring Franco Nero (who only played the character twice) and the director Corbucci.

Alex Cox, a filmmaker and the author of a seminal book about the Spaghetti Western genre, 10,000 Ways to Die, describes Django as an “impressionistic, cruel…pop-cultural stew.”

This is a pretty apt description of Tarantino’s films as well, and there’s no reason to think the same won’t be true of Django Unchained.

All that said, Django Unchained is going places no Spaghetti Western, or for that matter, any Western, has gone before. This picture will take place two years before the Civil War, and, although the movie will see parts of Texas, Tarantino has said this is going to be more of a “south.” Most of the story appears to take place in the deep south, Tennessee and Mississippi—and what it’s about, is slavery, and Django is black.

The movie stars Jamie Foxx as Django, and its other actors include Leonardo DiCaprio, Kurt Russell and Samuel L. Jackson. Based on the script, what the old Django and the new one have in common is that both films are violent, emotionally flat and exceptionally cruel.  The heroes and the villains in the original Django are so close in nature that it’s next to impossible to tell them apart, but somehow there is a distinction, and that was what made Corbucci interesting as a filmmaker.  This is also true of Tarantino.

But Django Unchained adds slavery and racism to the formula. Because of this, the new picture might just step on a lot of toes. Based on what I know about the film now, I predict that Django Unchained will defy expectations and that the issue of race will be the reason why.

These two pictures that promise to share such different spins on slavery in America are already making December look like an interesting movie month for Western fans.

We do have one more invite to the Lincoln party. The movie will probably hit the discs and cable outlets, but the poster is pretty funny:  Abraham Lincoln vs. Zombies. Somehow I don’t see the film competing with Spielberg, Tarantino or the Vampire fantasy.