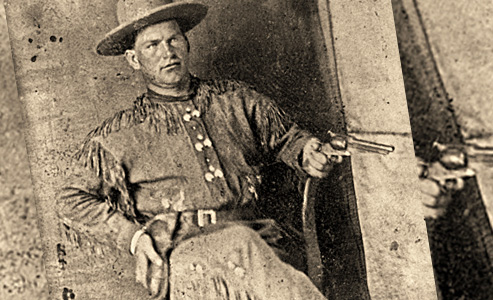 America was preparing to enter her 100th anniversary of independence, the nation’s firearms industry was a veritable beehive of activity. To fulfill demands made by the citizenry of our Western territories, or those ready to depart for these wild lands.

Arms merchants constantly strove to come up with newer and more practical guns of all types and sizes.

After Colt’s success in selling the U.S. government its 1873 Single Action Army (SAA) revolver, popularly known as the Peacemaker, the Hartford firm’s competitors knew they needed to bring out a metallic cartridge “Army” or “holster” revolver of their own. Most of these rival companies manufactured six-guns that differed significantly from the Colt offering. However, one manufacturer boldly entered the field with a revolver that bore more than a slight resemblance to the popular Peacemaker Colt.

E. Remington & Sons, of Ilion, New York, introduced its “New Model 1875” or “No. 3 Revolver”—a Peacemaker look-alike—in the fall of 1874, with the hopes of competing with, or at least taking advantage of, the ’73 Colt’s instant popularity.

In designing its 1875 model, Remington combined the lines of its sturdy cap-and-ball New Model Army and Navy revolvers with those of the 1873 Colt SAA. The final result was a handsome marriage of the two handguns. Actually, about the only real differences between the two six-shooters were the Remington’s webbed under-barrel assembly and the slightly longer distance from the back of the frame and hammer area to the grip. On a subtler note, the Remington placed its ejector housing directly underneath the barrel, whereas the Colt’s ejector assembly was situated at an angle off the barrel’s lower right side. Another minor departure from the Peacemaker is that the ’75 Remington’s ejector head and rod are operated from the right side of the barrel, rather than from the left as with the Colt. Further, the Remington’s longer cylinder base pin-retaining screw is located in the fore-section of the ejector housing as opposed to the Colt’s shorter version being housed in the front of the frame itself.

Initially chambered for the .44 Remington, a proprietary centerfire cartridge, production guns were later produced in .44-40 (.44 WCF). A handful of revolvers were turned out in .45 Colt caliber and are extremely scarce today.

Although the 1875 Army was offered as standard with 7½-inch round barrels, a few hundred guns left the factory with the shorter 5¾-inch tubes. Such short-barreled ’75 Remingtons command a premium with collectors nowadays.

Factory finish was either full nickel plating or blued with a color case hardened loading gate and hammer. Triggers have been found blued as well as in a color-cased finish. Regardless of the gun’s overall adornment, front sights were either a simple nickeled blade (even on blued models) or a smallish blade-type post, finished to match the revolver.

While one basic hammer style was employed, the company fit its revolvers with three distinct types of solid firing pins. Despite the fact that in 1878, Smith & Wesson introduced a rebounding hammer in one of its new revolvers, thus reducing the chance of an accidental discharge should the firing pin strike the primer of a live cartridge if dropped, Remington, like Colt, did not adopt this feature in its single actions. Thus, the old frontiersman’s practice of only loading five rounds and leaving the chamber directly under the firing pin was indeed a wise one to follow. Nevertheless, Remington’s firing pin variations can serve as a clue to each gun’s date
of production.

Two-piece walnut grips were standard fare, although ivory or Mother of Pearl stocks were also offered at extra cost.

As a point of interest, during the 19th century, the Remington facility followed the practice of manufacturing its revolvers in batches. With the start of each new lot of guns, numbering would start over again with serial number 1. In total it produced approximately 25,000 of the 1875 models. Because of the production numbering system, about seven specimens bearing serial number 1 exist. Thus, a low serial number could be of relatively late manufacture with this revolver. The 1875 models all bear fairly low numbers, so an extremely low serial number on one of the six-guns simply implies it was produced early in a given batch of ’75 models.

At the onset of the 1875 Remington’s run, sales were brisk and the gun seemed destined to enjoy a huge success. Within the first year of the six-shooter’s production, the Egyptian government alone ordered 10,000 guns. However, as the years rolled on, sales lagged and production fell far short of the company’s expectations.

If Remington had any hopes of securing a military contract, these never materialized. Though the company submitted its 1875 model for various trials, officers serving on the trial boards saw no apparent advantage in Remington’s offering over the already-issued 1873 Colt.

Sometime during the 1880s, the Republic of Mexico ordered 1,000 revolvers. Such arms were clearly stamped with distinctive Mexican markings and command a premium among modern-day collectors.

Despite its “Peacemaker” image, the 1875 Remington never became a serious rival to the Colt. Production of the model finally stopped in 1889.

For years, gun historians believed the Model 1890 Remington was the only other metallic cartridge, frontier big-bore six-gun made by Remington. Then devoted antique gun collectors Don Ware and Slim Kohler discovered this model type actually got its start in 1888. Arms students now recognize two versions of this ever-so-slightly revamped ’75 Remington.

The 1880s version of Remington’s military-size six-gun remained basically the same as the 1875 model, with the notable exception of the cutaway web underneath the barrel. Advertised as the “Model 1888,” the revolver was also called the “New Model Pocket Army Revolver.” Chambered in .44-40 caliber, the slightly shortened six-gun had a 5¾-inch barrel (the catalog incorrectly advertised the barrel as 5½ inches). Like the ’75, the ’88 Remingtons are stamped on the barrel with the legend “E. Remington & Sons, Ilion, N.Y., U.S.A.” Production quantities of the 1888 model are unknown at present, but historians believe the company made between 500 to 1,000 of these guns.

With the reorganization of the Remington company in 1888, the company was taken over by the renowned firm of Hartley and Graham of New York, Winchester and a small consortium of Chicago investors.

In 1890, Remington brought out the last model of its large-frame revolver, with production starting up in 1891. Virtually the same as the 1888 model, this model could now be had in either 5¾-inch or 7½-inch barrel lengths; minor differences between the two included assembly markings, the new “Remington Arms Co., Ilion, N.Y.” barrel stamping and the factory-standard black hard rubber grips bearing the intertwined Remington Arms monogram.

Remington’s handsome new big-bore six-shooter looked more like the classic Colt Peacemaker than before. Although this single action sold for just $10.70, it was not a good seller and production of this .44-40 was limited to about 2,020 revolvers. Manufacture of the ’90 model ceased in 1894, marking the end of Remington’s bid for a spot in the large caliber revolver marketplace.

While the Remington frontier models never represented much of a threat to Colt’s domination of the big-bore revolver market, these Old West “smokewagons” did have their loyal followers on both sides of the law. Chief among these was the infamous Missouri bad man Frank James, who rode the outlaw trail with his brother Jesse and often carried a brace of .44-40 caliber 1875 Remingtons. Upon surrendering to Missouri Gov. T.T. Crittenden in 1882, Frank was asked why he carried Remingtons. The desperado replied, “Because the Remington is the hardest and the surest shooting pistol made, and because it carries exactly the same cartridge that a Winchester rifle does [.44-40]. My armament was two Remingtons and a Winchester rifle. The cartridges of one filled the chambers of the other. You can now see why I prefer the Remington. There is no confusion of ammunition here. When a man gets into a close, hot fight, with a dozen men shooting at him all at once, he must have his ammunition all of the same kind.”

Due to the increasing value of original arms in shooting condition, currently produced Italian-import reproductions of Remington 1875 and 1890 models, such as those from replica arms importers like Cimarron Fire Arms, Dixie Gun Works, Taylor’s & Co. and Uberti, are finding their way into the holsters and hands of cowboy action shooters, cowboy mounted shooters and frontier gun buffs alike.

These guns represent close, but not exact, copies of the old-time Remingtons. Although both the 1875 and 1890 model Uberti-made replicas maintain the overall look of the 19th-century metallic cartridge Remingtons, they differ primarily in that these modern-day copies’ cylinder base pin-retaining screws are located on the sides of the frame (like the post-1896 Colt SAA) rather than on the forward end of the ejector. Hammer spurs are a tad shorter and finishes vary. Currently produced short-tubed ’90 model reproductions wear 5½-inch barrels rather than the 5¾-inch versions found on originals.

Otherwise they heft and feel like the real deal and, based on this gunner’s experiences at the firing range, they shoot on a par with the vintage guns of this ilk. However, as with any vintage revolvers, anyone wishing to pack one of these modern replicas for live-fire shooting should adhere to the tried-and-true practice of only loading five rounds and leaving the chamber under the firing pin empty, despite the safety system incorporated in these modern imports’ hammers.

Although Remington never dominated the field with its frontier six-guns, the company did leave an indelible mark in history with these ruggedly handsome revolvers. Highly revered by those hardy men who relied on them in the heyday of the Wild West, Remington’s frontier six-guns are sought-after collectibles today—certainly the mark of true classics.