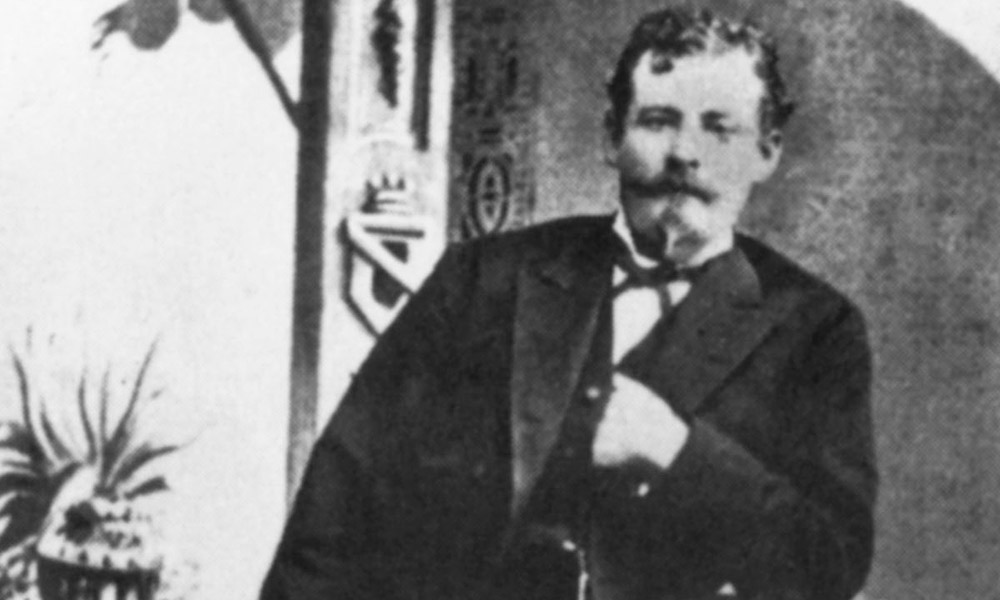 Ike and Fin Clanton, who had survived the Cochise County War against Wyatt Earp and his brothers five years earlier, had moved their operations to the Springerville area. Their ranch, the Cienega Amarilla, was located east of Springerville, near Escudilla Mountain.

The Clanton’s had been accused of terrorizing local citizens, cattle rustling, train robbery and holding up the Apache County treasurer. Under the leadership of family patriarch, Newman Haynes “Old Man” Clanton, they had created a successful business in Cochise County during the late 1870s and early 1880s brokering stolen livestock from Mexico. The old man was killed in an ambush at Guadalupe Canyon in the summer of 1881, and the youngest, Billy, died a few weeks later in the so-called “Gunfight at OK Corral.”

A story was told around Tombstone that the Clanton’s often boasted the reason they were so successful in the cattle business was that they didn’t have to buy their cows.

Ike was a fairly likeable figure around Tombstone. He had plenty of money to spend around town, and this made him popular among locals. He was also a loudmouthed braggart and, more than anyone else, had instigated the fateful showdown with the Earp brothers and Doc Holliday in Tombstone on October 26th, 1881.

When the shooting started, Ike ran away and hid, leaving his younger brother Billy to die. Interestingly, the Earp’s and Doc Holliday might have been charged with murder had Ike not testified for the prosecution. He got on the stand and with his outlandish tall tales snatched defeat from the jaws of victory for the prosecution. But that’s a story for another time.

No doubt, despite his popularity, Ike had many character flaws. Noted Tombstone historian Ben Traywick described him as “a born loser.”

There was so much litigation over rustling in Apache County that Ike Clanton was probably not a high priority. As he did in Tombstone, Ike passed himself off as a successful businessman. He had a lot of money to throw around, and that was good for business.

On Christmas Day 1886 in Springerville, Evans, wanting to see “if a bullet would go through a Mormon,” shot and killed Jim Hale in cold blood. Apparently Hale had incurred the wrath of the outlaws earlier after he helped identify some livestock they’d stolen.

Five days later, the St. Johns Herald wrote of the killing, “During a holiday jollification in Springerville on Christmas Day, the ordinary amusement of pistol shooting was indiscriminately indulged in, and the town ventilated with bullets. Mr. Hale, who was said to have been among the celebrates was shot through the body, from which death ensued.”

The Clanton’s downfall in Apache County began a few weeks earlier on November 6th with the shooting of a local rancher named Isaac Ellinger at the Clanton ranch. Ellinger and a friend, Pratt Plummer, had ridden to the ranch and had dinner with the Clanton brothers and Lee Renfro. Afterward, Ellinger, Ike and Renfro went into another cabin and were having a conversation when Renfro suddenly pulled his pistol and shot the rancher.

After the shooting, Ike and Fin assured Renfro they were his friends and there was no need to make a hasty exit.

As he lay dying, Ellinger called the shooting “coldblooded murder,” saying he had no idea Renfro was going to shoot him. He died four days later.

William Ellinger, Isaac’s brother, was one of the biggest cattlemen in the West, owning ranches in several states and territories. He was a member of the Apache County Stock Association and had a lot of political clout in the area.

In April 1887, the Apache County Stock Association convened in St. Johns and hired a Pinkerton detective to keep an eye on Andy Cooper’s gang. At the same time, Sheriff Owens dispatched Apache County deputies Albert Miller and Rawhide Jake Brighton to go after the Clanton’s. Brighton, along with being constable at Springerville, was a range detective enforcing the law with a mail-order detective’s badge.

Originally, on the recommendation of Undersheriff Joe McKinney, Owens had hired the famous ex–Texas lawman Jeff Milton to go after the Clanton’s, but at the last minute, he accepted a job as customs officer in southern Arizona.

In May and June 1887, several grand jury indictments were brought against the Clanton’s and their friends. Most of them involved the murder of Isaac Ellinger. One of the warrants charged Lee Renfro with the murder of Ellinger.

Six-gun justice was closing in on the outlaws. The July 9th edition of the Albuquerque Morning Democrat wrote a detailed description of the gunfight at Eagle Creek, stating that Billy Evans, aka Ace of Diamonds, and Longhair Sprague were believed to have met their deaths at a ranch owned by Charlie Thomas in the Blue River country of eastern Arizona. The two, along with either Lee Renfro or Kid Swingle, had ridden into the ranch and, after enjoying the rancher’s hospitality, left the following morning, taking with them some of their host’s horses.

Thomas and two friends picked up their trail and caught up with the rustlers at the mouth of Eagle Creek. Evans and Sprague pulled their guns and opened fire on the ranchers, who returned fire, killing both rustlers. The third rustler, probably Renfro, escaped.

The St. Johns Herald had a different take, claiming the story was a hoax conjured up by friends of the outlaws in order to give them time to escape. Still another twist of the tale claimed the story was made up to protect the posse as to the identity of who was actually gunning down the rustlers.

Soon after the gunfight at Eagle Creek, the law finally caught up with Lee Renfro along the border of Graham and Apache Counties. A “secret service” officer, in the employment of a cattlemen’s association, recognized him and attempted to make an arrest. Renfro went for his gun, and the officer shot him down.

“Did you shoot me for money?” the dying outlaw asked.

“No, I shot you because you resisted arrest,” he replied. The mysterious “secret officer” was the ubiquitous Rawhide Jake Brighton.

About that same time, it was reported that the infamous horse thief Kid Swingle was found hanging from the limb of a tree.

According to reports, Brighton and Albert Miller rode south of Springerville into the Blue River country near the Arizona–New Mexico border looking for Ike and his friends. After three days of hard riding, they stopped to rest at the ranch of James “Peg Leg” Wilson on Eagle Creek. They spent the night there, and the next morning while they were having breakfast, Ike Clanton rode in. Brighton recognized him and went to the door.

Suddenly Ike wheeled his horse around and bolted toward a thick stand of trees nearby. At the same time, he jerked his Winchester from its scabbard and threw it across his left arm.

Afterwards, Wilson rode to the nearby Double Circle Ranch where he found four of Ike’s friends, who returned with him to identify the body.

Ike’s body, along with his spurs and pistol, was wrapped in a piece of canvas and buried at the Wilson ranch.

Earlier that year, in April, Fin Clanton had been arrested for rustling and jailed in St. Johns and was still behind bars when Ike was run to the ground. Otherwise, he might have met the same fate as his brother. Fin was convicted in September and sentenced to ten years at the territorial prison at Yuma but was released after serving only two years.

Ike and Fin’s brother-in-law, Ebin Stanley, was given sixty days to get out of Arizona. He and his wife packed their belongings and moved to New Mexico.

Whether or not Ike was “resisting arrest” when he was killed is still debated by historians. Despite the official report, there are some today who insist that Brighton was a hired assassin who shot Ike in the back as he was running away. The assassination of known rustlers wasn’t all that uncommon in the Old West, where justice was sometime hard to come by. Ike had cleverly managed to elude the law for several years before he was finally driven out of Cochise County.

Shot while resisting arrest was a term often used to justify exterminating an evasive outlaw who’d managed to escape prosecution by legal means. Towns and cities in the West frequently resorted to vigilante justice when they felt the law was unable or unwilling to protect them. Big ranchers and cattlemen’s associations across the West oftentimes hired gunmen to rid their ranges of livestock thieves. The Johnson County War in Wyoming and story of Tom Horn are classic examples. The legendary Cochise County Sheriff John Slaughter acted as judge, jury and executioner more than once.

Author Steve Gatto wrote, “The last man standing gets to tell the tale.” And so it is.