It Always Rains After a Dry Spell 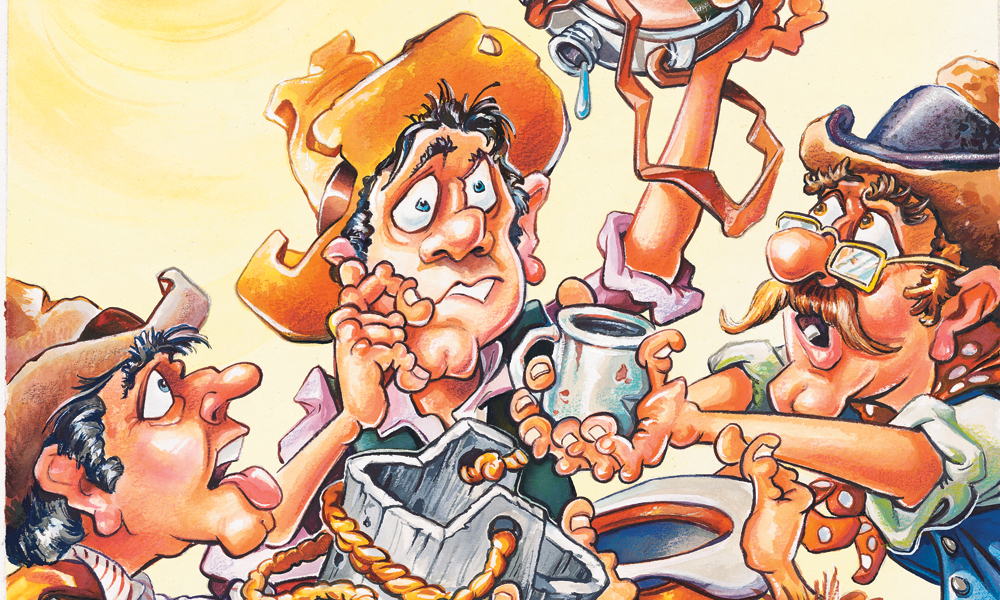 It seems like my entire life has been spent living in a drought. I was born in Mesa, Arizona in 1939 where we lived on a small livestock farm. My father, a patient man, would always say, “It always rains after a dry spell.”

It never rained and finally he sold the cows, hired out for the Santa Fe Railroad and we moved to Ash Fork.

Many years later I became an author and thinking I might bring more rain to this desert land, I decided to title one of my books after my dad’s old proverb. Still, it didn’t rain. Little kids would see me on the street, point a finger at me and say, “You lied. I’m seven years old and have never seen rain.”

Arizonans like to boast that their heat is a “dry heat”, something that probably helps to explain why most of those little drops around here is a dry rain. I’ve known folks who prayed their family picnic would get rained on so the youngsters would have something to tell their grandchildren. Optimism soars and natives grab their umbrellas and raincoats when the television weatherman goes out on a limb and predicts a “slight chance of showers.”

Waddie Culpepper once showed up at a bridal shower wearing a slicker.

My Uncle Charlie Gilpin was born in Bisbee but spent most of his life in Yuma. He swore that back in Ol’ Noah’s day when it rained forty days and forty nights, Yuma only got a quarter of an inch.

When the weather forecasters announce that Yuma got a four-inch rain it meant the raindrops were four inches apart.

I was headin’ west of Zuni, New Mexico in a driving rainstorm a few years back and I swear the moment I hit the “Welcome to Arizona” sign the rain stopped, sun was shining and the pavement was bone dry. Being a practical kind of guy, I stopped, put my old pickup in reverse and backed into New Mexico just so I could savor a few more rainy moments before heading home.

When Shorty Roundtree and his wife Sadie moved from Oregon to Gila Bend they were considering buying an adobe house from an old prospector. The house looked like it would suit their needs but before signing the papers Shorty gazed up at the ceiling and asked, “Are you sure the roof doesn’t leak?”

The prospector got a puzzled expression on his face and replied, “Leak what?”

This is the time of the year when ranchers around the Southwest like to gather in the local cafes and watering holes discussing the dry weather.  Each prevaricator likes to claim their particular ranch has the driest creeks, dustiest storms, least rainfall and longest drought. As a rule first liar doesn’t stand a chance.

Some of ‘em are so good at lying you can’t believe ‘em when they say they are lyin’. One time O.D. Fuller got caught tellin’ the truth and it took him thirty minutes to lie his way out of it.

Frank Siebold, a rancher down in Patagonia and a great storyteller, used to tell of the time a long dry spell hit southern Arizona. The ranchers would meet for coffee every morning in a local café and discuss the dry weather.

Just by chance there happened to be an old song on the jukebox called, “It Ain’t Gonna Rain No More No More.”

As the drought dragged on tempers were wearing thin among the ranchers, especially after the some of the local high school kids, bent on antagonizing the good old boys by dropping nickels in the hurdy-gurdy playing that blasted song over and over again.

Finally, they could take no more; they picked up the juke box and deposited it in the local saloon where the kids couldn’t get to it.

Down near Willcox, in Cochise County, is a huge, dry lakebed. Old timers claim that at one time its sparkling blue waters rivaled those of Lake Tahoe. That is until a tour bus full of German tourists held a picnic on the shore. They brought along a couple of kegs of beer and a several barrels of pretzels. They guzzled all the beer but there was still lots of pretzels so they tossed the remainder in the lake. The fish started feasting on those salty pretzels and got so thirsty they drank all the water. There hasn’t been enough rainfall since to refill it.

The drought also had an effect on religion. The churches out in Salome passed a water-saving ordinance that until the drought ended declaring the Baptists could only sprinkle; the Methodists had to use a damp cloth and the Presbyterians had to issue rain checks.

During the summer of 1990 a heat wave set all kinds of records in Arizona. The climax came on June 26th when the temperature hit 122 degrees—that’s in the shade and five feet off the ground. It got so hot cowboys out in Cave Creek were heatin’ their branding irons just by aimin’ ‘em at the sun and the bronze statues at the state capitol started sweating. A capitol police officer swore he saw Father Kino spur his horse, then rode over to a large shade tree. I decided to check the other day and it’s still there. A man in Scottsdale wound up in the hospital with third degree burns after jumping into his swimming pool to cool off.

Mirages have been known to fool the saltiest of old cowboys. Hector Salazar told of a time when he was driving a bunch of thirsty cows across the Sulphur Springs Valley, sometimes referred to as the “Sufferin’ Springs Valley.”  Most of the water holes had dried up and it looked like they weren’t gonna make it but then he came upon a big pond where he camped for several days virtually waterin’ his stock before he realized the pond was only a mirage……..but he insisted, “It kept my cows from dyin’ of thirst.”

During a long drought in 1889, the Arizona Cattlemen’s Convention met in Phoenix and rancher Daniel Houston Ming was asked to give the opening prayer. Dan was a salty old cattleman who normally accepted no man or beast as his master. But these weren’t normal times and he needed a big favor and he wasn’t too proud to humble himself before the Almighty.

He removed his hat and gazing towards the heavens began:

“Now Lord, I’m about to round you up for some plain talk. Lord, I ain’t like those fellars who come bothering you every day. Why, this is the first time I’ve ever tackled you for anything and if you will only grant this I promise I’ll never bother you again.

We want rain, Good Lord and we want it real bad and we ask you to send us some. But if you can’t or don’t want to send us any, doggone it don’t make it rain over on those ranges in New Mexico but treat us all alike. Amen!”

Like this story? Try: Burt Alvord, Biddy Doyle and the Bisbee Caper