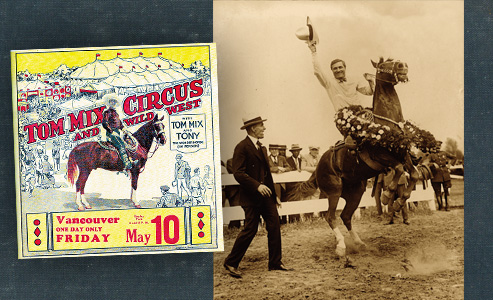 The Pacific Northwest was far off Tom Mix’s range in 1909. Yet the Oklahoma cowboy was inspired by his past four years performing as a bronc buster for the Miller Brothers 101 Ranch Wild West show near Ponca City.

Tom and wife Olive had decided to put together their own Wild West show. They knew the Alaska-Pacific-Yukon Exposition, which capitalized on the Alaskan gold rush, drew a huge audience for six months. The Mixes figured folks wouldn’t mind paying a few more dollars for a ticket to a Wild West show. So Tom, Olive and rodeo buddy Charlie Tipton arrived in Seattle, Washington, in late May, just a few days before the exposition opened. They had to work fast.

Tom rented the Western Washington Fairground, down the street from the exposition grounds, and called in Jim Gabriel. This veteran of Buffalo Bill Cody’s Wild West, also known as Cheyenne Bill, was a rodeo and Wild West show producer. With his connections, he rounded up all the cowboys and livestock. Tom recruited 40 Blackfoots to attack the stagecoach.

Tom Mix’s Wild West show was a hit with the audiences, mainly thanks to Tom’s creativity in staging events. His crew not only rode broncs, bulldogged steers and staged Indian raids, but Tom and Tipton even jousted while in full armor, an extremely dangerous stunt.

The Mixes knew how to promote themselves too. They printed postcards featuring a photo of Tom wrestling a steer to the ground. The caption proclaimed him “Champion Bulldogger of the Exposition,” when actually the Mixes had no official tie to the main event.

In the photo of the cowboys sporting their most silver-laden bridles, Tom stands second from the left. Ever a self promoter, Gabriel is seated in front. The lone cowgirl is Gabriel’s daughter, Helen. Billed as “one of the Mulhall sisters,” in an effort to play on the fame of rodeo champion Lucille Mulhall, Helen apparently lacked her father’s interest or talent or both, as she never became a rodeo star.

Although Tom’s show made money, the Pacific Northwest weather was not only aggravating to Okies Tom and Ollie, but also bad for business; shows had to fit between rain showers. In July, the couple folded the show and went home—a smart move. By October, Tom appeared in the Selig short, The Cowboy  Millionaire. Within 10 years, he had become the highest-paid actor in Hollywood and the world’s biggest cowboy star of the silent cinema.

As for Gabriel, he turned the whole shebang into Cheyenne Bill’s Wild West Show. Although the Alaska-Pacific-Yukon Exposition ran into October, Gabriel had contracts to put together other shows, and he closed his show in August.

The show may have been a little-noticed spark in the history of rodeo, but the experience taught Tom what he didn’t want to do for a living and sent him on his way to Western movie immortality. He only looked back when the talkies stalled his career; he reformed his circus and Wild West show in 1933, but Tom never recaptured the success he had known as a silent cowboy star.