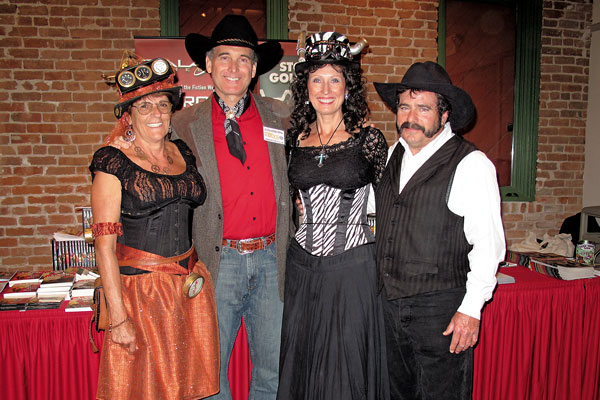 Don’t get me started on politically correct books.

For my money, the best Western ever is The Toughest Ranger by L. Ron Hubbard. I think it truly pays respect to the Arizona Rangers, who are the real heroes who tamed Arizona, making it possible for statehood

History has taught me that the winner in any conflict becomes the senior editor in any recounting of that event.

My biggest influences have been those who have maintained their own integrity to their vision in creating a better world. Those include Walt Disney, L. Ron Hubbard, Nelson Mandela and Mother Teresa.

The one character I am in awe of is Thor. That hammer of his is awesome. He has always been the coolest.

The best time to create is now. I find it much harder—and tiring—to worry about something I didn’t get done.

What is up with not letting kids read fun books? Let them develop an appreciation for reading first. Then, if you must, make them read the “literary” works. I can assure you that if they aren’t reading fun stuff, they aren’t reading the hard stuff either, regardless what they are writing in their book reports! Ever hear of CliffsNotes or Monarch Notes?

I can’t imagine living in a world where people no longer read and where imagination has been replaced by 3-D, surround sound and super-CGI effects.

I fell in love with the West when I grew up in Tucson, Arizona, in the 1960s and 1970s. I had the Catalina, Rincon, Tucson and Santa Rita Mountains as my backyard. And I loved to play in my backyard!

Martin Kove, of Wyatt Earp fame, directed The Toughest Ranger, performed outdoors at the base of Camelback Mountain at L. Ron Hubbard’s former home in Phoenix, Arizona. Among the cast was Paul Pape (Saturday Night Fever) and Peter Brown (Lawman).

My mother always told me I could do anything I set my mind to. Then she told me I had to finish eating my dinner before I could have dessert.

JOHN GOODWIN, GALAXY PRESS PRESIDENT
In 2008, Galaxy Press began publishing the stories L. Ron Hubbard wrote for pulp magazines, including his Westerns, like the recently released King of the Gunmen. Goodwin serves on the boards for Friends of Hollywood Central Park and the Hollywood Chamber of Commerce. As president of Galaxy Press, he has created the Adventures in Reading program in an effort to promote the Reading Merit Badge to more than 2.6 million Boy Scouts. The Golden Age Theater located in Hollywood delivers weekly performances of Hubbard’s pulp stories (Goodwin stands, second from left, with cast and fans).