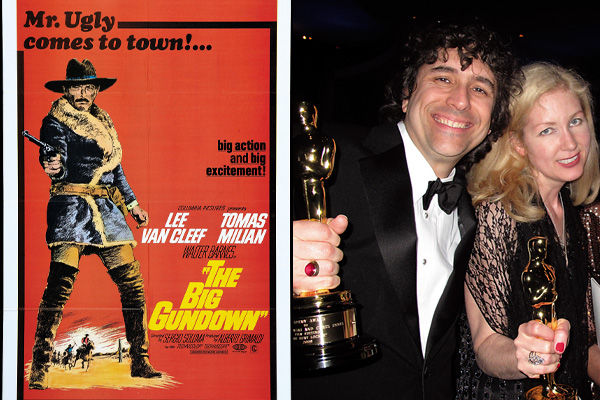 Bob Murawski loves movies, and not in that bogus “Citizen Kane resonates on so many levels” kind of way. His is a dedication to underdog flicks, their history and their preservation.

Even for an Academy Award-winning film editor, rebuilding an underdog flick is no easy task because the companies that handled these genre films years ago shucked them aside, after playing them off on double bills and at drive-ins. The studios considered these films disposable, with zero thought to the talent that went into them, or the value these films would have years later.

When Columbia Pictures released The Big Gundown, starring Lee Van Cleef, in 1966, the one-sheets declared, “Mr. Ugly Comes to Town!” to take advantage of Van Cleef’s success in The Good, the Bad, and the Ugly. The problem is that Van Cleef was actually “the Bad.” But that blatant disregard for accuracy only reinforced the studio’s indifference for one of the actor’s very best films, making the movie a perfect treasure for rediscovery via Murawski’s Grindhouse Releasing.

Murawski began the company in 1996 with his good friend Sage Stallone. “I worked for a film distributor in Detroit, and we were handling movies like Gates of Hell and, later on, the Troma stuff. When I met Sage, these were the kinds of movies he liked, especially the Italian stuff, and he wanted to know if I’d be interested in trying to get them out. They were basically considered junk, exploitation films, but we wanted to do them right. Sage was shooting Daylight with his dad [Sylvester] during the day, and when he wasn’t working, he was on the phone tracking down prints of these Italian horror movies.”

The problem that both Murawski and Stallone encountered is a familiar one to film archivists: neglect. The prints and negatives had been haphazardly stored and sustained real damage.

The technicians in Rome weren’t fazed at all: “I was at Technicolor to look at the negative for The Beyond. It was in a rusty can in the corner, and the guys just didn’t care. We were looking at reel two, and there was this big tear, and the lab guy says, ‘Don’t worry, don’t worry,’ grabbed a piece of splicing tape, and pressed it onto the negative—with his thumb!”

Cannibal Ferox was Grindhouse’s first release, followed by Horror maestro Lucio Fulci’s The Beyond and the hippies-with-rabies flick, I Drink Your Blood. Every film was painstakingly restored and given the “Criterion treatment,” with extensive DVD extras, including interviews with filmmakers and alternate cuts to scenes that had been censored in America. Grindhouse established an instant reputation for quality with these astounding presentations.

While Grindhouse grew, Murawski’s career as a film editor took flight. He cut seven of director Sam Raimi’s films, including the first three Spider-Man movies and Oz, the Great and Powerful. In 2010, he won an Academy Award for The Hurt Locker, an Oscar he shares with his talented wife, editor Chris Innis.

But the film lover never stopped in his quest to give neglected movies their due. A fan of the “Man with No Name” trilogy, Murawski began seriously exploring Euro-Westerns, with his ears rather than his eyes. “I loved the [Sergio] Leone movies,” he says, “but the way I was introduced to a lot of the other Spaghetti Westerns was through their soundtracks. I had the recordings of the scores and wanted to see the movies.”

While working at Sony on the Spider-Man films, Murawski made the deal to release Sergio Sollima’s The Big Gundown, with Van Cleef and Tomas Milian. “Columbia never put out Big Gundown, even in the golden age of VHS,” he says. “All [it] had was the American 89-minute cut, and that’s terrible, because the Italian version is much longer. So I tracked down the producer Alberto Grimaldi, and he had a new video master of his cut.

“We looked at the Sony print and were shocked it was so beautiful. So we had that with Grimaldi’s, but [his was] missing sound elements, since the longer cut was in Italian. James Owsley found a 16mm television version with those scenes in it, so we put together our sound.”

Innis supervised the immense work, while Murawski finished up his duties on Oz. Sadly, his friend and partner Sage died tragically last year, but Grindhouse’s dedicated mission continues on, releasing the best versions of the movies Murawski love. “Big Gundown is such a great movie on so many levels,” he says. “It’s got cool political overtones, and Van Cleef is great in it. It’s just A-plus from start to finish.”

(Criterion Collection Blu-ray, $39.95) In 1956, Delmer Daves set to work with Halsted Welles (The Hanging Tree) to adapt the late Elmore Leonard’s short story “Three-Ten to Yuma” for the screen. Published in Dime Western Magazine in 1953, the story was one of Leonard’s first sales to the movies, and it couldn’t have been in more creative hands.

Daves had been looking westward for most of the decade, starting with the enormous accomplishment of Broken Arrow in 1950. What Daves saw in Leonard’s story was the framework for a Suspense Western, as outlaw Ben Wade plays mind games with the simple farmer who is keeping Wade prisoner until he can put him on the train to the prison in Yuma, Arizona Territory. Working with Daves, Welles opened up Leonard’s story through his script, bringing in family issues and fleshing out the townsfolk who are potential targets for Wade’s gang.

3:10 to Yuma is a model of suspense filmmaking, showing Daves at the top of his form. The performances are uniformly excellent, especially those by Henry Jones, as the town drunk who tries to help, and Felicia Farr, as the girl who Wade beds before being captured. Glenn Ford’s Wade is charming, easygoing and cold-blooded, assuming that Van Heflin’s broke rancher poses no real threat. Their interplay is realistic and fierce as one man pushes the other, and death remains just a trigger pull away.

On the Criterion Blu-ray, Charles Lawton Jr.’s black-and-white images pull you into the action. Although the collection does not offer a commentary track, it does include new interviews with Leonard and with Peter Ford, who talks about his dad’s multiple films with Daves, including Jubal, which Criterion has also released in a special edition.

Daves made other successes, like A Summer Place, but his version of 3:10 to Yuma is a quiet masterpiece, in which he drew from all he had learned from his work of the previous 20 years. By introducing the original film to a new audience, Criterion is helping Daves get his just appreciation.