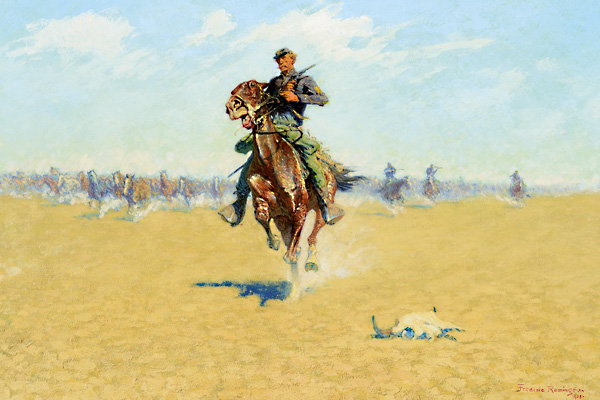 Frederic Remington did not live to see his Cutting Out Pony Herds (A Stampede) receive public notice.

Collier’s Weekly published the oil on its front cover a century ago, on February 1, 1913, a little over three years after the master cowboy artist’s death.

“The subject of this picture was an incident that was practiced by the Army of the West, with which Remington was personally familiar,” noted the late Harold McCracken, the world’s foremost authority on Remington. “When attacking a renegade Indian camp the soldiers sometimes used a mounted trooper to ride close to the Indians’ herd of ponies, while firing his revolver into the air to stampede the horses away from the camp and put the Indians afoot and more vulnerable to the attack.”

The July 27 sale of this painting at Coeur d’Alene Art Auction in Reno, Nevada, broke an auction record for the artist. Not only did the $5 million bid match the previous Remington record, for The Wounded Bunkie bronze sold at Sotheby’s New York in 2008, this painting surpasses the record set by Christie’s New York, in 1999, for a Remington oil, A Reconnaissance.

Other artworks inspired by true frontier history were also showcased. Overall, collectors who auctioned off their art earned more than $30.5 million.