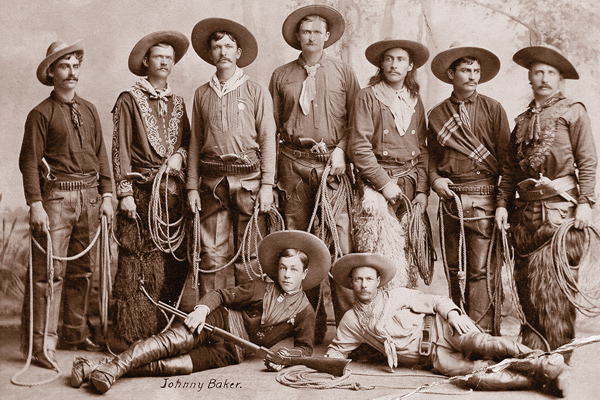 Wild West shows and frontier rodeos are largely responsible for the distinctive styling and flare seen on cowboy shirts today.

Starting with Buffalo Bill’s first Wild West show in 1883, Taylor rode bucking broncs and demonstrated other cowboy skills he had learned in his native Texas and while trailing cattle to Montana and working on Cody’s Nebraska ranch. Taylor’s image was embroidered in dime novels, which proclaimed him “King of the Cowboys.” His newfound fame allowed him to wear embroidered shirts more appropriate to his star status in Buffalo Bill’s Wild West show. Incidentally, those same novels helped rehabilitate the lowly image of cowboys in general.

Rodeos began as informal contests of skill between vaqueros and caballeros  during roundups, or rodears, at 1820s and 1830s Mexican Texas and California fiestas. American cowboys began holding their own roundup competitions after the Civil War. The location and time of the first cowboy “rodeo” is a highly contentious and likely unsolvable mystery. Organized rodeo-style events date to 1869, while rodeos with paid admissions and prizes for winning contestants began cropping up in the 1880s. The term “rodeo,” which first appeared in American usage in the mid-1830s, did not take on its current meaning until around 1914. By then, cowboys were beginning to wear fancier shirts.

Cowboy movies further aggrandized the cowboy and the shirts he wore. Not coincidentally, several rodeo cowboys went on to successful careers in Hollywood as actors or stuntmen. Tom Mix was a prominent example. Shirts designed for silver screen cowboys and their rodeo counterparts became works of art. Elaborate embroideries and fanciful pocket, cuff and yoke treatments on exotic fabrics transformed the cowboy shirt. In addition, safety features, such as break-away snap closures on shirt fronts  and cuffs, were introduced on the shirts of rodeo cowboys.

The Western apparel industry sprang up overnight after WWII in response to popular demand for mass-produced, less-expensive versions of these shirts. Miller Stockman, Rockmount Ranch Wear, Wrangler, Panhandle Slim, Karman and dozens of other companies stepped up to the plate.

Nearly any Western shirt made today can lay claim to rodeo roots, and it continues to be appropriate attire in the arenas and in the stands. Wrangler, Miller Ranch, Cinch, Panhandle Slim and Roper are among the brands offering rodeo-ready shirt styles for the entire family.