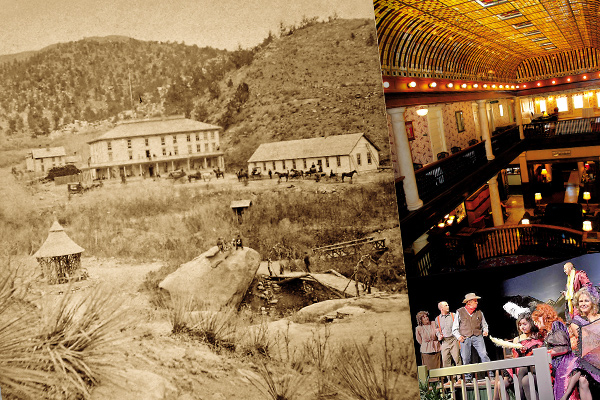 Sure, you can find historic hotels across the West, but I don’t know if any state offers a better selection than Colorado. Don’t believe me? Well, try this road trip on for size.

From the Cliff House at Pikes Peak to a Denver brewmaster’s Creede Hotel.
Sure, you can find historic hotels across the West, but I don’t know if any state offers a better selection than Colorado. Don’t believe me? Well, try this road trip on for size.

Cliff House at Pikes Peak
Built in 1873, this hotel in Manitou Springs started out as a stagecoach stop on the trail from Colorado Springs to Leadville. In 1886, Edward Nichols bought the 20-room building known as an inn and turned it into a hifalutin resort.

Today, after a $10.5 million renovation, this remarkable 4½-story building features 200 rooms, including suites named after former celebrity guests such as Buffalo Bill, Gen. John Pershing, Charles Dickens, Clark Gable and Teddy Roosevelt among others. If that 4-Diamond restaurant can’t entice you, the wine list tops 700; the  six certified sommeliers won’t steer you wrong.

Broadmoor
This Colorado Springs hotel is not a dairy farm.

That’s right, this resort of 744 rooms, 18 eateries, a spa and three golf courses started out as the Broadmoor Dairy Farm in 1880. Actually, before that, the land owners grew corn to make brooms.

The hotel business came after Count Pourtales bought the property and built a casino in 1891. In 1916, mining magnate Spencer Penrose turned the property into the five-star getaway that has charmed presidents, rock stars, baseball players and actors.

Armstrong Hotel
Originally opened in 1923—then the tallest building in town—the Armstrong in Fort Collins had fallen into serious disrepair when Missy and Steve Levinger bought the vacant building “on a whim” in 2002.

Rooms vary from eclectic modern to unique vintage looks at this 43-room boutique hotel, but Missy points out, “We tried to keep as much historical integrity as we could.”

Those vintage rooms might have you recall early 20th-century Fort Collins, but that downstairs bar, Ace Gillett’s, looks like something you’d find in New York or Chicago.

Sorry. I couldn’t help myself, but I should point out that while Stephen King found his inspiration for his novel The Shining while staying in Room 217, the 1980 movie starring Jack Nicholson wasn’t filmed at this hotel in Estes Park.

Many visitors are captivated by that novel and movie, but the history dates much earlier. F.O. Stanley arrived in Estes Park in 1903 and soon decided to build a place for his friends. “He had a lot of friends,” my guide, Jesse Freitas, tells me. Opened in 1909, the Georgian-style hotel keeps bringing in overnight guests. The hotel and the 40-room boutique lodge also attract thousands of tourists, who come for various tours or to look around.

Hotel Boulderado
The five-story hotel got its start from a subscription drive to build a luxury hotel for all the tourists coming to Boulder. Construction began in 1906, and the Hotel Boulderado—the name came from combining “Boulder” with “Colorado”—opened in 1909.

They built this from subscriptions? You gotta love Boulder.

The hotel’s 160 rooms are spectacular, but what really grabs your attention is that stained-glass canopy ceiling. A Halloween snowstorm in 1959 cracked part of the ceiling, which got replaced with Plexiglas. Decades passed before new ownership restored the property—and its ceiling—to its original elegance.

Brown Palace Hotel & Spa
Don’t mess with Henry Cordes Brown. When the Windsor Hotel refused Brown entrance because he was wearing cowboy boots, he decided to build the Brown Palace in Denver.

Although it took him four years and $1.6 million, when the Richardsonian Romanesque hotel opened in 1892, it was considered “unprecedented.”

It still is. From its elegant rooms to the time-honored afternoon tea to its perfect restaurants and exceptional staff, the Brown Palace is the place to get pampered. Little wonder every president (except Calvin Coolidge, who didn’t get out much) has stayed here since 1905.

Designed by Brown Palace visionary Frank Edbrooke, the Oxford opened in 1891, and it is Denver’s oldest historic hotel in existence. Brewer Adolph Zang envisioned a grand hotel across the street from Union Station, and he successfully attracted a lot of travelers.

Including artists. Sure, the part-Victorian, part-Art Deco hotel has 80 great rooms, but this hotel might be known for its art collection. We’re talking Frederic Remington’s Saturday Night Hell-Raisers and many others, including John Fery’s Panoramic Mountain Landscape.

Legend has it that Fery created the painting to pay for his hotel bar tab. That’s a lot of Jameson Ginger Smashes at McCormick’s Fish House and Bar.

Antiques Roadshow would love this place.

Built in Leadville in 1886 as part of the $60,000 Delaware Block, the Delaware—named for the home state of the owners, the Callaway brothers—was a 60-room hotel that also housed businesses. It also was reportedly one of the first buildings west of the Mississippi River with a built-in vacuum system.

Today, owner Gail Dunning’s hotel has 36 rooms, including four two-room suites, and hallways lined with antique furniture, most of which is for sale.

“Our goal here has been to interpret history at every turn of the road,” she says.

Opened in 1948 and named after its owner in Steamboat Springs, Police Chief Everett Bristol, the Hotel Bristol has gone through many owners over the years. Like Steamboat Springs itself, the hotel has morphed from attracting cowboys to winter sports enthusiasts.

Then in 1994, Andy Van Baak bought the property. Today, it offers 23 cozy units, plus an indoor hot tub.

This charming hotel and cafe—with a chicken-fried steak that will make a Texan swoon—was built in Meeker in 1896, with east and west wings added in 1904.

“No two rooms are alike,” says owner Kimberly Ritchie. “Each of the tin ceilings is unique, and we have four original clawfoot bathtubs.”

The Meeker has had plenty of historical guests too. President Teddy Roosevelt visited in 1901, and actor Gary Cooper stayed here. Oh, and someone signed the hotel registry “William H. Bonney.” Of course, that was on July 6, 1889—roughly eight years after Billy the Kid was killed. But the real Billy would have enjoyed his stay, and the fake Billy probably did too.

Opened in Glenwood Springs in 1893, the “Grand Dame of the Rockies” is sprawling and elegant, but comfortable.

In 1905, Roosevelt stayed here, and he loved the hotel so much, he kept coming back; it even became known as the “Little White House of the West.” Hotel legend has it that maids presented the president with a stuffed bear, and the “Teddy Bear” was born. “That’s our story,” manager Larry Welch says.

The 130-unit hotel has undergone many changes since its founding—it was a convalescent home for the Navy in the 1940s—but remains a spectacular place to visit. Since the hotel was modeled after Rome’s Villa Medici, chef Ron Jackson dishes out mouthwatering, Italian-inspired cuisine with a touch of Colorado.

You may find it hard to believe, but Aspen was once a wild mining town. Then Jerome B. Wheeler, who co-owned Macy’s in New York, decided to build a hotel that would bring civilization here.

I reckon it worked. The Hotel Jerome opened in 1889 and then struggled after the Panic of 1893. When Aspen turned into a ski resort in the 1940s, the Jerome was restored, attracting jet setters and celebrities.

John Osgood wasn’t your typical mine owner in Redstone. Around 1900, he built 84 chalet-style homes for his miners and a 20-room inn for the bachelors working for him. We’re talking about indoor plumbing and electricity too. Seems Osgood wanted to improve the miners’ living conditions.

Osgood lost his mining company in a stock war, but he returned in 1925 and began restoring what is now the Redstone Inn. A private two-bedroom chalet was built in 2009, but the inn offers several styles of rooms. You can even stay in a small room in the working clock tower.

Built in 1891, this hotel in Ouray belongs in a Western movie. It is, after all, the “oldest three-story wooden structure left on the Western Slope,” says owner Gregg Pieper, who also runs San Juan Scenic Jeep Tours.

The hotel features original hand-painted French wallpaper in one room, two tin ceilings—one in the ballroom and one in the lobby—original light fixtures and a second-story veranda. The bar is cool too.

Most important, Pieper is enthusiastic about his hotel, Ouray’s history and the stunning beauty all around this place.

If the Western Hotel was and remains for the working class in Ouray, the Beaumont is for wealth. No children under 16. No pets. But plenty of comfort.

Built in 1886 as the “Flagship of the San Juans,” the Victorian Gothic hotel was the pride and joy of the Western Slope. Actress Sarah Bernhardt performed from the balcony. Ute leader Ouray stayed here with his wife. Roosevelt stayed here, but then, where didn’t he stay in Colorado?

Yet hard times fell on the Beaumont; it was abandoned in 1964 and remained vacant for decades. In 1998, new owners purchased it on the auction block and the hotel underwent five years of a roughly $7 million renovation.

The first Sheridan was built in Telluride in 1891, but it burned down three years later; the New Sheridan went up in 1895. Presidential candidate William Jennings Bryan was here a year later, reprising his “Cross of Gold” speech on a platform in front of the hotel.

The hotel was remodeled in 1994 and became the 26-room luxury hotel that wows visitors today with its antiques and service. If the bar looks familiar, Butch and Sundance: The Early Years was filmed here (the back bar was imported from Austria in 1901, but the tin ceiling and mirrors were added for the movie). Plus, the hotel’s outstanding restaurant is  known for its fantastic selection of wines.

Henry Strater was a pharmacist who dreamed of building a grand hotel in Durango. He borrowed $70,000 from the bank to construct it, and he opened the Strater Hotel—then called the Strater House—in 1888.

His hotel didn’t just appeal to travelers. Durango residents would close their homes in winter and move into the hotel, which had a wood-burning stove in each room. That’s not the case today, naturally.

Louis L’Amour spent a lot of time writing in Room 222, just above the Diamond Belle Saloon. In 1960, future president John F. Kennedy gave a campaign speech in the Pullman Room.

Named for Gen. William Jackson Palmer, who built the Durango-Silverton Narrow Gauge Railroad, this luxury hotel opened in Durango in 1898, and, yes, that elevator is original.

Thirty rooms filled with antique furniture can be found in the main hotel. From the rear balconies, you have a perfect view when the locomotives leave or pull into the depot.

Today, it’s open only during the summer, and it’s certainly not fancy. After all, Creede never was fancy. On the other hand, no one ate as well in 1892 as they do now, thanks to owner and chef David Toole.

“No TVs, and no telephones,” Toole adds. “I’ve avoided even providing Wi-Fi.”