On a Mission in San Antone 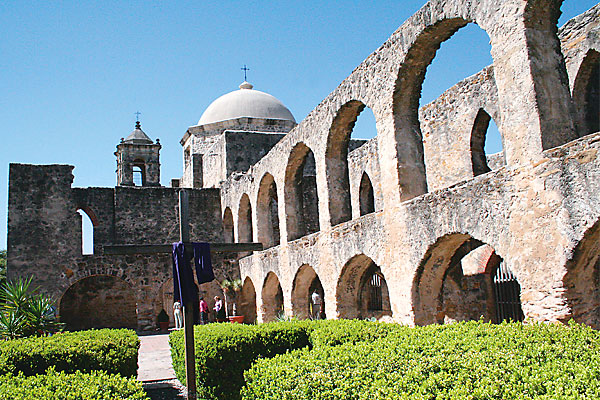 Dressed in cowboy hat and boots, I’m walking across the San Antonio Missions Visitors Center parking lot with my four-year-old son when a docent calls out to Jack, “Hey, son, is your grandfather a real cowboy?”

Maybe the ignorant S.O.B. will still be in the parking lot after my interview, and I can run over the jerk.

I’m here to talk to park ranger Dava Davy McGahee and get the scoop on those other Mission City missions. I don’t need insults. I know there are more missions than that little one surrounded by downtown sky-scrapers called the Alamo, home of Davy Crockett, William Travis, Jim Bowie, John Wayne, Fess Parker and zillions of tourists, and I want to spread the word.

It’s also part of McGahee’s job to get the word out—and preserve and interpret history. She doesn’t even hold a grudge against the PR-hogging Alamo. Me? Sometimes I like to think those gallant defenders were just a bunch of zealots who disobeyed Sam Houston’s orders and got what they deserved.

Yet the Alamo, part of the San Antonio Mission Trail, was an important landmark even before that fracas back in 1836. Mission San Antonio de Valero, the Alamo’s official name, was the first Catholic mission in San Antone.

Even so, the four others shouldn’t be neglected. If you really want to experience San Antonio, you have to take the Mission Trail, and the best starting point—fool docents aside—is the visitors center next door to Mission San Jose.

In the 1700s, Franciscan priests and Spanish colonists founded missions along the San Antonio River, determined to convert the Indians to Catholicism. Well, they also wanted all those fabled riches, but when reality slapped them and they realized the riches weren’t really here (San Antonio legends Dave Little and Sam Lucchese hadn’t started making their custom boots yet), religion rose to the forefront.

The Alamo was founded in 1718, and Mission San José established two years later. By the 1730s, malaria and other setbacks had forced friars to rethink their East Texas missions, so they moved to San Antonio, reestablishing San Francisco de la Espada (originally San Francisco de los Tejas) and San Juan Capistrano (originally San José de los Nazonis) on the San Antonio River. Mission Nuestra Señora de la Concepcion de Acuña, another East Texas mission founded in 1716, also had moved to San Antonio by 1731. Most of the inspiring churches were finished in the 1750s.

The Mission Trail stretches about nine miles, from the northernmost Alamo to remote Espada at the southern tip. The trail gets you out of the city, and much of the traffic. While the Alamo is surrounded by the 21st century and congestion associated with being in one of the largest U.S. cities, the other missions give visitors more of a feel for what life was really like in the 1700s.

Visiting Concepcion, San José, San Juan and Espada is like stepping back in time. I start at sprawling San José—“Queen of the Missions,” a visitor called it back in 1777—then hit San Juan and Espada before doubling back to Concepcion. The National Park Service maintains these missions, while the Alamo is under the command of the Daughters of the Republic of Texas. While visiting these four, I’m struck by the history, but also, perhaps, something higher. After all, the four missions remain active parishes.

As I leave Concepcion and head on up to the Alamo, I’m not even mad at that idiot docent anymore.