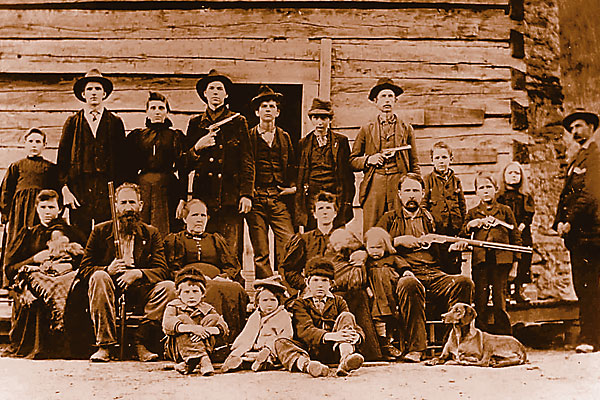 Feuds are funny things – with one act of violence leading to another (and another and another), it’s sometimes hard to figure out what all the fuss was about in the first place.

Not so in the case of the Regulator-Moderator War in east Texas, which ran from about 1841-44. It was one of the worst feuds in U.S. history; more than 30 men died in the conflict, and that doesn’t count other victims who were wounded, horse-whipped or forced to leave their land for safer climes. By comparison, the Hatfield-McCoy feud claimed about a dozen victims. Arizona’s Pleasant Valley War counted about 25 dead. The Lincoln County War of New Mexico totaled about 15 casualties, if you count Billy the Kid.

This war started as a disagreement between Joseph Goodbread and Charles Jackson, according to the new book by Bill O’Neal, War in East Texas: Regulators vs. Moderators. Neither man was what one would call an upstanding citizen.

Goodbread was a land pirate who dealt in fake property titles; his pals were horse thieves, counterfeiters and killers. Jackson was a former steamboat captain with a couple of notches on his gun-and a reputation as a man not to be trifled with.

In 1841, Jackson ran for the Republic of Texas congress and lost, thanks in part to the opposition of land swindlers like Goodbread. Jackson was understandably miffed, so he wrote letters exposing Goodbread’s frauds to Austin, New Orleans and Houston. Official action never came. But a different kind of action was quickly forthcoming.

In mid-April of that year, somebody took a shot at Jackson one night outside his house. The good captain received a minor hand wound. A few days later, he received a letter from Goodbread, telling him to mind his own business or prepare to die. Jackson wasn’t one to be scared off by such things; he was encouraged to fight by his wife, who told him that he’d “…have to kill a few more before they left him alone” (recorded in an unpublished manuscript by Eph Daggett, one of the leaders of the Regulator faction).

So Jackson soon saddled his horse, grabbed his rifle (and the Goodbread letter) and rode into the nearby town of Shelbyville, where his crew hung out. Sure enough, Jackson found Goodbread sitting on a horse rack, talking with a friend. “Here is your letter. Get up,” Daggett recorded Jackson as saying. “I am going to answer that letter.”

An unarmed Goodbread tried to talk his way out of the jam, but to no avail. Jackson leveled his gun and shot the land pirate in the chest, killing him almost instantly. The captain turned himself in to the local sheriff – no friend of the dead man – posted bond and then headed for home. He was only “technically” tried for the crime; he used intimidation and a stacked jury of his friends to gain an innocent verdict.

Jackson eventually got his, as did a number of his friends – the Regulators. The followers of Goodbread (and other opponents of Jackson and Co.) formed the Moderators. And the blood flowed.

It took an intervention by Texas President Sam Houston and militia to put a halt to the violence in the fall of 1844. And when the U.S. declared war on Mexico in 1846, Moderators and Regulators found a common enemy to fight. For the most part, the feud was over.

But scars in east Texas remain, more than 150 years later. A number of buildings are still around from that period, as well as descendants of many of the participants. Neither associates with the other side. Some things just aren’t that easy to forget.