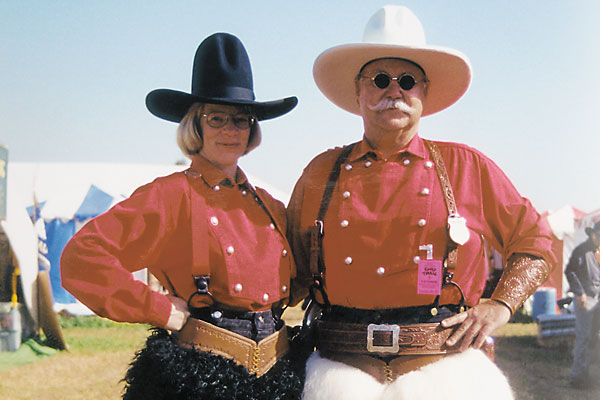 It takes a well-traveled and enthusiastic person whose love of the American West drives him (literally) to seek out the best spots to cultivate his obsession, whether it be a love of Old West collectibles, 19th-century firearms or Western music.

And it is an obsession. But that’s why if you had only five events from each respective category to attend this year, you’ll want to follow these experts’ recommendations.

All of the events are ranked first with the favorite, excepting the auction category, as the variety of Western collectibles lends to picking auctions based on the house specialty. Some picks were chosen by us humble editors simply because there wasn’t anyone else around willing to take on the task. Not that we mind sharing our opinions (ahem), but we do like giving others a voice. Because of that variety, not just one but two events (read on to figure out which ones) are a winner twice!

So strap on some cow gear, hop in your transport, put on some tunes and head on out to these events. Don’t forget to check in with us afterwards to show us how you partied like a cowboy.

Robert G. McCubbin of Santa Fe, New Mexico, owns one of the world’s largest private collections of historical Western photographs and books. He also serves on the McCracken Research Library Advisory Board at the Buffalo Bill Historical Center in Cody, Wyoming. How does he find his goodies? He says the nation’s best auctions featuring Western collectibles are a primary source.

Featuring Cowboy Collectibles & Antiques, Brian Lebel’s auction, held annually in June, is in its 18th year and remains the best. In addition to spurs, saddles, guns, hats, gunleather and chaps associated with the historic cowboy, the auction always offers a wide selection of quality art, decor and original photographs. Other shows, auctions and events take place the same week in Cody, making the trip all the more worthwhile. June 21-23, 2007. 307-587-9014 • codyoldwest.com

Held in Phoenix annually, always well attended and a gala event, High Noon features Western decor antiques from paintings to furniture to Navajo rugs, and cowboy collectibles from the Old West as well as the Hollywood cowboys. January 20-21, 2007. 310-202-9010 • highnoon.com

For his auctions in San Francisco, Greg Martin issues elaborate and beautiful catalogs of the finest in historic arms, knives and Western memorabilia. The collectibles look even more enticing in person. Throughout 2007. 800-509-1988 • gmartin-auctions.com

Wes Cowan has taken the forefront in the area of original Western photographs in his semi-annual Historic Americana auctions. Wes goes the extra mile to assure the authenticity of his offerings. June 5-6 & November 9-11, 2007. 513-871-1670 • cowanauctions.com

Amidst the plethora of Western art auctions, Altermann offers a wide range of classic and contemporary art to fit all tastes and price ranges. Several annual auctions take place in Santa Fe,  New Mexico, and Scottsdale, Arizona. Throughout 2007.
505-983-1590 • altermann.com

Phil Spangenberger of Leona Valley, California, is a field editor for True West and Guns & Ammo, and a Hollywood gun coach, with Charlton Heston, Mel Gibson and Will Smith among his past students. He’s also worked with the History Channel and Outdoor Channel. Spangenberger specializes in late 19th-century American West firearms, frontier artifacts and cowboy culture.

Billed as the “Biggest rifle shoot in Eastern Montana since the Custer Massacre,” this traditional single shot or lever rifle match (.375 caliber or larger) brings in hundreds of competitors from 30-plus states and more than a half-dozen foreign countries, along with vendors, grub and plenty of friendly folks. June 16-17, 2007. 406-356-7746

Held in Covington, Georgia, this SASS Southeastern Territorial Blackpowder Shoot-out rates as the biggest cowboy action shoot in the South, with a passel of cowboy shooting, frontier traders and great Southern food and hospitality. May 2007. 706-335-7302 • mulecamp.com

For 58 years, the small town of Northfield, Minnesota, has celebrated that day in September 1876 when citizens took up arms and brought down the James-Younger Gang. The event includes a grand parade, rodeo, re-enactments of the bank raid and a memorial to the citizens who were killed by the outlaws. This outstanding event attracts tens of thousands of visitors. September 5-9, 2007. 507-645-5604 • djjd.org

This remembrance of Tombstone, Arizona’s boomtown heritage and its famous O.K. Corral gunfight offers loads of re-enactments—all on the streets where the Earps once walked. October 19-21, 2007. 888-457-3929 • helldoradodays.com

Gail Woerner of Austin, Texas, has spent the past 20 years researching and interviewing rodeo folks. She is the author of five books featuring bull riding, bronc riding, roping and rodeo clowns. And she is chairman of the Rodeo Historical Society’s oral history project of cowboys and cowgirls based at the National Cowboy & Western Heritage Museum in Oklahoma City, Oklahoma.

Held in Pendleton, Oregon, the action-packed rodeo turns a town of 17,000 into 55,000. It not only features all the regular events but also includes Indian relay races and a five-tribe Indian program. The grass-covered arena is quite challenging to the contestants, especially those timed-event cowboys who expect their horses to “stop on a dime”—remember how slippery grass can be?—but the arena doesn’t stop the top cowboys from coming as the purse is big and winning this rodeo is important. The enthusiasm by the fans is also refreshing and not found everywhere. This rodeo reminds me of the rodeos I attended 50 years ago. September 12-15, 2007. 800-45-RODEO • pendletonroundup.com

“The Daddy of ’em All,” this rodeo hasn’t stopped since 1897 and features the Old-Timers Steer Roping contest and Rookie Bronc Riding, plus lots of additional activities for fans, including a cowboy breakfast each morning and three parades during the week. July 21-29, 2007. 307-778-7200 • cfdrodeo.com

Deadwood’s dedicated rodeo committee holds a Junior Bull Riding event that shows the youth are perpetuating the sport of rodeo. Spectators sit in a magnificent stadium made of huge pine columns, nestled in a beautiful setting in the Black Hills. July 24-29, 2007. 605-578-2872 • daysof76.com

This rodeo held in Colorado Springs, Colorado, is steeped in history.  Pike’s Peak looming in the background or the rodeo makes for a grand visual. All the proceeds from the rodeo go toward military charities. July 11-15, 2007. 719-635-3547 • pikespeakorbustrodeo.org

The key to enjoying this blow-out is finding Heber City, Utah. Once you get there, all you have to do is sit back and relax. You’ll see and hear the top names in cowboy poetry and Western music. Another event highlight is the Horse Extravaganza, featuring fine equestrian work accompanied by the performers. Waddie Mitchell is the 2007 festival host. Oh, and finding him and Heber City ain’t so tough—it’s about 45 miles southeast of Salt Lake City. November 6-11, 2007. 435-654-3666 • hebercitycowboypoetry.com

3. SPIRIT OF THE WEST Cowboy gathering

A great chance to meet and greet the cowboy poets, musicians and artists who perform. This central Washington festival in Ellensburg is something special. February 16-18, 2007. acowboygathering.org

This gathering in Encampment, Wyoming, is a young’un, just four years old, featuring up-and-comers in the cowboy poetry and music field. True West Contributing Editor Candy Moulton is one of the organizers of the event, so it’s got to be good! July 13-15, 2007. 307-326-8855 • grandencampmentcowboygathering.org

In Arvada, Colorado, you’ll find top poets, yodelers and musicians at daytime sessions and matinee/evening concerts; this event continues to grow in popularity and deservedly so. January 11-14, 2007.  720-898-7200 • arvadacenter.org

1. FESTIVAL OF THE WEST

This is the really big show with something for everyone—a Western music     jamboree, trade show, film festival, cowboy poetry, chuckwagon cook-off, Mountain Man rendezvous and the Cowboy Mounted Shooting Grand American Championship. In the past few years, organizers for this show in Phoenix, Arizona, have put a lot of work into the festival, and the results are plain to see: this is the premiere Western event for visitors and participants alike. March 15-18, 2007. 602-996-4387 • festivalofthewest.com

Held in Fort Bridger, Wyoming, this rendezvous is a step back into the early 1800s, with hundreds of folks in Mountain Man attire, music and shooting competitions. Aug. 31-Sept. 3, 2007. fortbridgerrendezvous.net

Royal Wade Kimes is admittedly the spokesperson for the National Day of the Cowboy, but the reason why their festival rocks is partly because of this top Western singer who has performed at Western music festivals across the nation. Kimes worked as a ranch hand for Loretta Lynn and a chance meeting with Eddy Arnold helped him land a job as a songwriter in Nashville. He launched his own singing career in 1996 and has played at the festivals ever since.

This is my top pick because Ainsworth, Nebraska, is full of real cowboys and cowgirls from all ages. They celebrate the National Day of the Cowboy Holiday, not only because it is there to be celebrated but because they truly care. The Country and Western concerts are the top attraction at this event that also has the chuckwagons going, a horse sale and show, mounted shooting events, mercantiles of leather to spurs and there are no shortages of good looking horses here. July 2007.
402-387-2740

Cowboys come from all over the state and country to compete in the Western events in Covington, Georgia. A dance and concert tops off the event. May 2007. 706-335-7302 • mulecamp.com