Madonna of the Western Trails 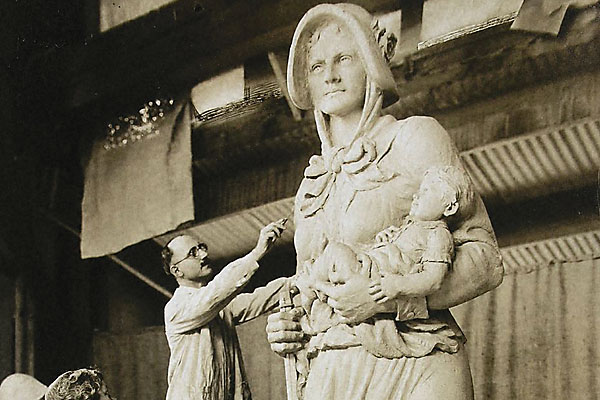 Dragging a weary child and cradling a baby, she knew how to fire a weapon and kept her gun close.

Just exactly where she was going, she didn’t know. Neither did any of the women next to her—those of European descent, religious, devoted to family. She faced danger from starvation, exposure to the elements and attacks by natives. Who was she? And what drove her to risk everything and travel to a strange land?

She was the pioneer mother, traveling by the Santa Fe Trail, the Coronado Trail and other early paths westward. She faced the setting sun for the same reasons her male counterparts did: to obtain cheap land, seek fortune, join a religious community or, perhaps, to escape her past. She made her way without the railroad or automobile, but, surprisingly, she trudged along a path that modern interstates now follow. And that’s no accident.

In the early 20th century, people traveled mostly by rail and were just starting to get introduced to the automobile. Worried that the old trails would soon be forgotten, a group of women from Missouri convinced their representative, William P. Borland, to introduce a bill in 1912 that gave all historic routes the name National Old Trails Road.

That same year, the Daughters of the American Revolution (DAR) pushed for the current National Road—stretching from Cumberland, Maryland, to Vandalia, Illinois—to extend west to San Francisco, California. The DAR began marking the historic trails by painting fence posts and telephone poles red, white and blue; it partnered with the National Old Trails Road Association, an organization formed in 1912 to assist the DAR with the business aspects of its cause.

Several associations across the nation were building roads, hoping to be part of an ocean-to-ocean highway system that would bring visitors and generate income for their states. These organizations met annually at the American Road Congress. During a 1913 session, an unknown delegate made a statement that is famous today: “It is an idle dream to imagine that automobiles will take the place of railways in the long distance movement of passengers.”

Not everyone, however, was so shortsighted. During the 1914 session held in Atlanta, the DAR adopted a symbol of the pioneer woman venturing westward for the new National Road. They called her the Madonna of the Trail. Yet the plan for permanently marking these historic routes was set aside once WWI erupted.

Nine years after the war ended, Missouri judge Harry S. Truman was president of the National Old Trails Road Association. Roads, automobiles and infrastructure interested Truman. While serving in the army during WWI in Europe, he had been intrigued with the road system he saw in France. He even sold memberships to the Kansas City Automobile Club until he got reelected as judge for Jackson County in 1926.

The DAR’s chairperson of the National Old Trails Road Association was also a Missourian. Arlene Moss envisioned the Madonna of the Trail as a statue much like the one in Portland, Oregon, depicting Sacagawea, the Shoshoni guide for the Lewis and Clark expedition.

Truman, with his knowledge of roads, was a fitting authority to assist Moss in choosing the locations of the 12 larger-than-life statues sculpted by German native August Leimbach. The duo traveled the country, listening to town leaders assert why their history warranted a monument.

A “demon letter writer”—as his daughter called him—Truman sent correspondence to his wife, which revealed what he and Moss were up against. “Got to Council Grove at 2:30 P.M. and met all the prominent citizens in town, at ‘the’ Building and Loan Association office. You’d think I was the President of the U.S. We discussed the National Old Trails, cussed Osage City, the next large town to the east (we’ll do the same for them when we go to Osage). Mr. Moses, of the Moses Milling Co., met us in a big Hudson sedan and the president of the Chamber of Commerce was there in his Buick sedan…. This is almost like campaigning for President except that the people are making promises to me instead of the other way around.”

The next day, the coalition visited historic Pawnee Rock. Truman commented on the DAR’s interest in the site, where many pioneers had died at the hands of Indians who feared their approach along the Santa Fe Trail: “The D.A.R. have put a fence around it and erected a fine monument on top of it to the early pioneers.”

He also wrote about the age-old competition between towns for visitors. “Larned and Kinsley each have had signs up directing traffic away from the other but they each claimed that some outside town on the other road had put up the sign.”

A year after he sent those letters, a decision had finally been made on one monument. “The Kansas situation is settled. Council Grove won. It was a hard thing to settle,” Truman wrote to his wife.

Meanwhile, other states were still vying for the opportunity to be chosen for the monument. “…the Albuquerque delegation backed me into a corner and tried to force me to promise to vote for this town for the monument,” Truman wrote. “Then a Santa Fe outfit did me the same way, and then Albuquerque started all over. Santa followed us to the hotel and wouldn’t let us loose.”

The schedule was hectic. “I’ve got to get up at six-thirty, meet Mrs. Moss at seven-thirty, and at 9:00 A.M. hold another court to hear this town, then drive to Santa Fe … come to a decision, and then start at Trinidad, Colorado, and hear Las Animas and Larimer and decide Colorado.”

In the end, five Western locales (out of 12 total) were chosen as sites for the Madonnas. Dedicated in 1928-29, all 12 of the statues are still keeping their watchful eyes on their respective trails.

Because of its location on the Santa Fe Trail, Council Grove offers numerous historic sites and monuments to visit, including a bell that was used to warn settlers of Indian attacks.

The Madonna monument, on Main Street (U.S. 56.), was dedicated on September 7, 1928. Its inscription states: “Here, ‘East meets West’ when the ‘Old Santa Fe Trail’ was established August 10, 1825 at a council between the United States commissioners and Osage Indians…. 1825-1866—Trailsmen. 1847—First white settler Seth Hays. 1847—Council Grove Trading Post.” No wonder Seth Hays made it here; he was the great grandson of Daniel Boone and a cousin to Mountain Man Kit Carson. You may still visit Hays’ 1857 tavern and restaurant, the second oldest tavern on the Santa Fe Trail.

With a population of about 9,000, Lamar is still a rural area with the nearest big city, Pueblo, approximately 140 miles away. In pioneer days, Lamar offered shelter for Western army posts and Indian lodges, and Santa Fe Trail wagon ruts are still visible near the site of Old Fort Lyon (also known as Fort Wise). The Big Timbers Museum, named for the giant cottonwoods along the banks of the Arkansas River, marks the site of an old trading post.

The dates are a bit off. Bent’s New Fort was built in 1853; Fort Wise was constructed a mile west of Bent’s New Fort in 1860. The post was designated Fort Lyon in 1862, honoring Brig. Gen. Nathaniel Lyon, who had been killed in the 1861 Battle of Wilson’s Creek. It was abandoned in 1867.

Albuquerque, New Mexico’s largest city, is old by Western standards, having been founded in 1706 by colonists from Spain. But history can be found dating farther back as evidenced by rock carvings, located at Petroglyph National Monument, which date back 2,500 years.

The city served as a major supply station to forts protecting settlers. Merchants, shipping goods by covered wagon and then later by rail, made Albuquerque the spot for transporting animal hides, livestock, lumber and minerals to the east.

Albuquerque’s monument, dedicated on September 27, 1928, is at Fourth and Marble NW and has the following inscription: “To the pioneer mother of America through whose courage and sacrifice the desert has blossomed. The camp became a home, the blazed trail the thoroughfare…. Into the primitive west, face upswung toward the sun, bravely she came, her children beside her, here she made a home, beautiful pioneer mother.”

Built around a trading post, Springerville is the home to a prehistoric site called Casa Malpais Pueblo. Springerville’s population is only about 2,000. The town merited a monument because of its location near the Old Coronado Trail, the route Francisco Vasquez de Coronado supposedly took during his search for the Seven Cities of Cibola in 1540.

The rugged and beautiful landscape has changed little since. The city’s monument, dedicated on September 29, 1928, is located on Main Street (Route 66). The inscription states: “A tribute to the pioneers of Arizona and the Southwest who trod this ground and braved the dangers of the Apache and other warrior tribes…. Coronado passed here in 1540. He came to seek gold but found fame.”

Canadians founded Upland, originally naming it North Ontario (they had already called another settlement Ontario). The area was known for citrus fruits and grapes, and was located on the road to Los Angeles.

Its historical significance is stated on the monument, dedicated on February 1, 1929, and located on Route 66 at Foothill Boulevard and Euclid Avenue: “This trail, trod by the padres in Spanish days, became under Mexican rule, the road connecting Los Angeles, later the American Post Road…. Over this trail, November 1826 Jedediah Smith, seeking a river flowing westward, led a band of sixteen trappers, the first Americans to enter California overland.”

Thanks to those conscientious women from Missouri and the DAR and National Old Trails Road Association, the location of these Western paths have not been forgotten.

Harry Truman, who would become the 33rd U.S. president in 1945, dedicated almost all of the statues personally. He praised pioneer women, for whom the Madonna represents, stating, “They were just as brave or braver than their men because, in many cases, they went with sad hearts and trembling bodies. They went, however, and endured every hardship that befalls a pioneer.”