“Western Movie” Night … at the Museum 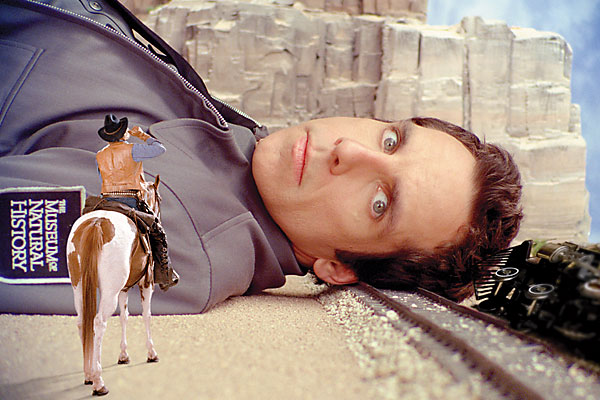 For 50 years, Teddy Roosevelt has had his eye on Sacagawea.

When Larry, the nightshift guard at Roosevelt’s namesake museum, convinces the former president to act on his feelings, Teddy offers the lovely Lewis and Clark guide a ride on his horse.

In 2006’s Night at the Museum, though, not everyone appreciates Larry. Especially not the sensitive cowboy, Jedediah, who has no problem firing up the iron horse to make him pay (although we don’t know for what). “Seriously, stop the train,” Larry begs. “All right,” Jedediah says. But as quick as Larry says “Thank you,” the train is off again: “Now full speed ahead and ram him! Split his head like a watermelon,” orders Jedediah, and the train does. Well, sort of.

It gets your attention, at least, and that’s the lesson of the movie—museums need more than passive exhibits; they’re supposed to be a place where “history comes to life.” Not literally, of course; we certainly wouldn’t want miniature Roman soldiers and Wild West cowboys attacking us and calling us “Gigantor.” But history can be fun, and museums should make every effort to show us how. What better way to do so than presenting some of that Hollywood magic in their exhibits? We’ve found you nine museums that do just that—pay tribute to the Western genre of cinema.

You Are Our Sunshine, Gene

CA, Los Angeles, Museum of the American West: America’s favorite singing cowboy star, Gene Autry, founded this museum in 1988. Its collection includes motion picture photographs, posters, costumes and props. The cinematic West is set in the context of the “real” West through the museum’s other exhibits on cowboy life, transportation and 19th-century pioneers. autrynationalcenter.org • 323-667-2000

UT, Moab, Moab Museum of Film & Western Heritage: Red Cliffs Lodge is built on a ranch formerly owned by George White, the founder of the Moab to Monument Valley Film Commission. The museum there shares stories behind the movies shot in the area and filmed on nature’s sound stage. On display are movie posters, props and autographed scripts from Westerns such as Ford’s Cheyenne Autumn and City Slickers II. redcliffslodge.com/museum • 866-812-2002

Getting Personal with John Wayne

MO, Branson, Roy Rogers-Dale Evans Museum: An intimate look at Roy and Dale by showcasing the items they saved and used, from scrapbooks made by Roy’s mom to pictures from the early days of the Sons of the Pioneers. royrogers.com • 417-339-1900

OK, Dewey, Tom Mix Museum: Houses items from the personal collection of Tom Mix, a silent movie star whose career spanned 26 years and 366 feature films (only nine of which were sound). Included in the collection is the “death suitcase” that fatally hit Mix in the head when he crashed his Cord roadster to avoid some road workers while driving through Arizona in 1940. 918-534-1555

Come On, Get Hoppy!

I Wannna Be a Cowboy’s Sweetheart

TX, Fort Worth, National Cowgirl
Hall of Fame Museum: The museum’s “Claiming the Spotlight” exhibit offers visitors larger-than-life images of female stars who have portrayed cowgirls and other female icons of the West: Barbara Stanwyck, Dale Evans, Patsy Montana. Katharine Ross shares the roles of Hollywood cowgirls, from stunt doubles to gun-toting dames, in a film shown in the gallery’s theater. cowgirl.net • 800-476-FAME

GA, Cartersville, Booth Western Art Museum: The museum’s “Reel West Gallery” showcases the action-packed artwork used to portray Western stories for movie posters, book and magazine covers, and magazine articles. The gallery shares how the art depicted on these posters were often critical to a movie’s success at the box office. boothmuseum.org • 770-387-1300